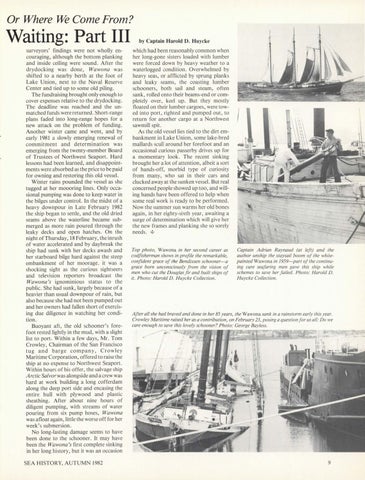 Or Where We Come From?

Waiting: Part III surveyors&#39; findings were not wholly encouraging, although the bottom planking and inside ceiling were sound. After the drydocking was done, Wawona was shifted to a nearby berth at the foot of Lake Union, next to the Naval Reserve Center and tied up to some old piling. The fundraising brought only enough to cover expenses relative to the drydocking. The deadline was reached and the unmatched funds were returned. Short-range plans faded into long-range hopes for a new attack on the problem of funding. Another winter came and went, and by early 1981 a slowly emerging renewal of commitment and determination was emerging from the twenty-member Board of Trustees of Northwest Seaport. Hard lessons had been learned, and disappointments were absorbed as the price to be paid for owning and restoring this old vessel. Winter rains pounded the vessel as she tugged at her moooring lines . Only occasional pumping was done to keep water in the bilges under control. In the midst of a heavy downpour in Late February 1982 the ship began to settle, and the old dried seams above the waterline became submerged as more rain poured through the leaky decks and open hatches. On the night of Thursday, 18 February, the inrush of water accelerated and by daybreak the ship had sunk with her decks awash and her starboard bilge hard against the steep embankment of her moorage. it was a shocking sight as the curious sightseers and television reporters broadcast the Wawona&#39;s ignominious status to the public. She had sunk, largely because of a heavier than usual downpour of rain, but also because she had not been pumped out and her owners had fallen short of exercising due diligence in watching her condition . Buoyant aft, the old schooner&#39;s forefoot rested lightly in the mud, with a slight list to port. Within a few days, Mr. Tom Crowley, Chairman of the San Francisco tug and barge company , Crowley Maritime Corporation, offered to raise the ship at no expense to Northwest Seaport. Within hours of his offer, the salvage ship Arctic Salvorwas alongside and a crew was hard at work building a long cofferdam along the deep port side and encasing the entire hull with plywood and plastic sheathing. After about nine hours of diligent pumping, with streams of water pouring from six pump hoses, Wawona was afloat again, little the worse off for her week&#39;s submersion. No long-lasting damage seems to have been done to the schooner. It may have been the Wawona&#39;s first complete sinking in her long history, but it was an occasion SEA HISTORY, AUTUMN 1982

which had been reasonably common when her long-go ne sisters loaded with lumber were forced down by heavy weather to a waterlogged condition . Overwhelmed by heavy seas, or afflicted by sprung planks and leaky seams, the coasting lumber schooners, both sail and steam, often sank, rolled onto their beams-end or completely over, keel up . But they mostly floated on their lumber cargoes, were towed into port, righted and pumped out, to return for another cargo at a Northwest sawmill spit. As the old vessel lies tied to the dirt embankment in Lake Union, some lake-bred mallards scull around her forefoot and an occasional curious passerby drives up for a momentary look. The recent sinking brought her a lot of attention , albeit a sort of hands-off, morbid type of curiosity from many, who sat in their cars and clucked away at the sunken vessel. But real concerned people showed up too, and willing hands have been offered to help when some real work is read y to be performed. Now the summer sun warms her old bones again, in her eighty-sixth yea r, awaiting a surge of determination which will give her the new frames and planking she so sorely needs . .t Top photo, Wawona in her second career as codfisherman shows in profile the remarkable, confident grace of the Bendixsen schooner-a grace born unconsciously from the vision of men who cut the Douglas fir and built ships of it. Photo: Harold D. Huycke Collection.

Captain Adrian Raynaud (at left) and the author unship the staysail boom of the whitepainted Wawona in 1959-part of the continuing care seafaring men gave this ship while schemes to save her failed. Photo: Harold D. Huycke Collection.

After all she had braved and done in her 85 years, the Wawona sank in a rainstorm early this year. Crowley Maritime raised her as a contribution, on February 23, posing a question for us all: Do we care enough to save this lovely schooner? Photo: George Bayless.