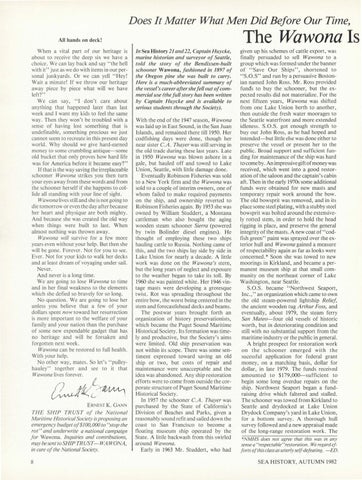 Does It Matter What Men Did Before Our Time,

All hands on deck! When a vital part of our heritage is about to receive the deep six we have a choice. We can lay back and say &quot;the hell with it&quot; just as we do with items in our personal junkyards. Or we can yell &quot;Hey! Wait a minute! If we throw our heritage away piece by piece what will we have left?&quot; We can say, &quot;I don&#39;t care about anything that happened later than last week and l want my kids to feel the same way. Then they won&#39;t be troubled with a sense of having lost something that is undefinable, something precious we just cannot seem to recreate in this present day world. Why should we give hard-earned money to some crumbling antique-some old bucket that only proves how hard life was for America before it became easy?&quot; If that is the way saving the irreplaceable schooner Wawona strikes you then turn your eyes away from these words and from the schooner herself if she happens to collide all standing with your line of sight. Wawona li ves still and she is not going to die tomorrow or even the day after because her heart and physique are both mighty. And because she was created the old way when things were built to last. When almost nothing was thrown away . Wawona will survive for a few more years even without your help . But then she will be gone. Forever. Not for yo u to see. Ever. Not for your kids to walk her decks and at least dream of voyaging under sail. Never. And never is a long time. We are going to lose Wawona to time and in her final weakness to the elements which she defied so bravely for so long. No question. We are going to lose her unless you believe that a few of your dollars spent now toward her resurrection is more important to the welfare of yo ur fami ly and your nation than the purchase of some new expendable gadget that has no heritage and wi ll be forsaken a nd forgotten next week. Wawona can be restored to full health. With you r help . No other way, mates . So let&#39;s &quot;pulleyhauley&quot; together a nd see to it that Wawona lives forever.

THE SH!P TRUST of the Nat ional Maritime Historical Society is proposing an emergency budget of$100,000 to &quot;stop the rot&quot; and underwrite a national campaign for Wawona. Inquiries and contributions, may be sent lo SHIP TRUST-WA WONA, in care of the National Society. 8

In Sea History 21and22, Captain Huycke, marine historian and surveyor of Seattle, told the story of the Bendixsen-built schooner Wawona, fashioned in 1897 of the Oregon pine she was built to carry. Here is a much-abbreviated summary of the vessel&#39;s career after she/el/ out of commercial use (the full story has been written by Captain Huycke and is available to serious students through the Society). With the end of the 1947 season, Wawona was laid up in East Sound, in the San Juan Islands, and remained there till 1950. Her codfishing days were done, though her near sister C.A. Thayer was sti ll serving in the old trade during these last years. Late in 1950 Wawona was blown asho re in a gale, but hauled off and towed to Lake Union, Seattle, with little damage done. Eventually Robinson Fisheries was sold to a New York firm and the Wawona was sold to a couple of interim owners, one of whom failed to make required payments on the ship, and ownership reverted to Robinson Fisheries again. By 1953 she was owned by William Studdert, a Montana cattleman who also bought the aging wooden steam schooner Sierra (powered by twin Bolinder diesel engines). He thought of employing these two ships hauling cattle to Russia . Nothing came of this, and the two ships lay side by side in Lake Union for nearly a decade. A little work was done on the Wawona&#39;s stern , but the long years of neglect and exposure to the weather began to take its toll. By 1960 she was painted white. Her 1946 vintage masts were developing a grotesque twist. Rot was spreading throughout the entire bow, the worst being centered in the stem and forecastlehead decks and beams. The postwar years brought forth an organization of history preservationists, which became the Puget Sound Maritime Historical Society. Its format ion was timely and productive, but the Society&#39;s aims were limited. Old ship preservation was not within its scope. There was some sentiment expressed toward saving an old ship or two, but costs of repair and maintenance were unacceptable and the idea was abandoned. Any ship restoration efforts were to come from outside the corporate structure of Puget Sound Maritime Historical Society. In 1957 the schooner C.A. Thayer was purchased by the State of California&#39;s Division of Beaches and Parks, given a reasonably sound refit and sailed down the coast to San Francisco to become a floating museum ship operated by the State. A little backwash from this swirled around Wawona. Early in 1963 Mr. Studdert, who had

given up his schemes of cattle export, was finally persuaded to sell Wawona to a group which was formed under the banner of &quot;Save Our Ships&quot;, shortened to &quot;S.O.S&quot; and run by a persuasive Bostonian named John Ross. Mr. Ross provided funds to buy the schooner, but the expected resu lts did not materialize. For the next fifteen years, Wawona was shifted from one Lake Union berth to another, then outside the fresh water moorages to the Seattle waterfront and more extended idleness. S.O.S. got enough strength to buy out John Ross, as he had hoped and intended-but little else was done either to preserve the vessel or present her to the public . Broad support and sufficient funding for maintenance of the ship was hard to come by. An impressive gift of money was received, which went into a good restoration of the saloon and the captain&#39;s cabin aft. Then in the early 1970s some additional funds were obtained for new masts and temporary repair work around the bow. The old bowsprit was removed, and in its place some steel plating, with a stubby steel bowsprit was bolted around the extensively rotted stem, in order to hold the head rigging in place, and preserve the general integrity of the masts. A new coat of&#39; &#39;codfi sh green&quot; paint was sprayed over the exterior hull and Wawona gained a measure of respectability again as far as looks were concerned.* Soon she was towed to new moorings in Kirkland, and became a permanent museum ship at that small community on the northeast corner of Lake Washington, near Seattle. S.O .S. became &quot;Northwest Seaport, Inc.,&quot; an organization which came to own the old steam-powered lightship Relief, the ancient wooden tug Arthur Foss, and eventually, about 1979, the steam ferry San Mateo-four old vessels of historic worth, but in deteriorating condition and still with no substantial support from the maritime industry or the public in general. A bright prospect for restoration work on the schoon er emerged with the sucessful application for federal grant money, on a matching basis, dollar for dollar, in late 1979. The fund s received amounted to $ 179,000-sufficient to begin some long overdue repairs on the ship. Northwest Seaport began a fundraising drive which faltered and stalled. The schooner was towed from Kirkland to Seattle and drydocked at Lake Union Drydock Company&#39;s yard in Lake Union, for a bottom survey . A thorough hull survey followed and a new appraisal made of the long-range restoration work . The *NMHS does not agree that this was in any sense a &quot; respectable &quot; restoration . We regard efforts of this class as utterly self-defeating. -ED.