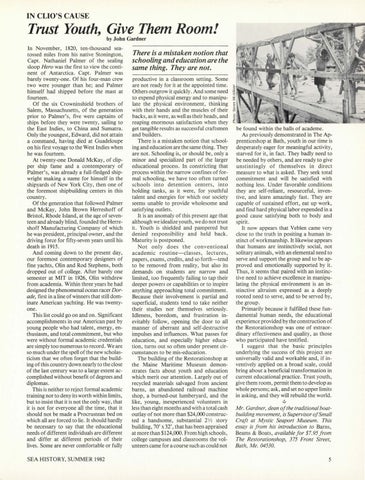 Trust Youth, Give Them Room! by John Gardner

In November, 1820, ten-thousand seatossed miles from his native Stonington, Capt. Nathaniel Palmer of the sealing sloop Hero was the first to view the continent of Antarctica. Capt. Palmer was barely twenty-one. Of his four-man crew two were younger than he; and Palmer himself had shipped before the mast at fourteen. Of the six Crowninshield brothers of Salem, Massachusetts, of the generation prior to Palmer&#39;s, five were captains of ships before they were twenty, sailing to the East Indies, to China and Sumatra. Only the youngest, Edward, did not attain a command, having died at Guadeloupe on his first voyage to the West Indies when he was fourteen. At twenty-one Donald McKay, of clipper ship fame and a contemporary of Palmer&#39;s, was already a full-fledged shipwright making a name for himself in the shipyards of New York City, then one of the foremost shipbuilding centers in this country. Of the generation that followed Palmer and McKay, John Brown Herreshoff of Bristol, Rhode Island, at the age of seventeen and already blind, founded the Herreshoff Manufacturing Company of which he was president, principal owner, and the driving force for fifty-seven years until his death in 1915. And coming down to the present day, our foremost contemporary designers of fine yachts, Olin and Rod Stephens, both dropped out of college. After barely one semester at MIT in 1926, Olin withdrew from academia. Within three years he had designed the phenomenal ocean racer Dorade, first in a line of winners that still dominate American yachting. He was twentyone. This list could go on and on. Significant accomplishments in our American past by young people who had talent, energy, enthusiasm, and total commitment, but who were without formal academic credentials are simply too numerous to record. We are so much under the spell of the new scholasticism that we often forget that the building of this country down nearly to the close of the last century was to a large extent accomplished without benefit of degrees and diplomas. This is neither to reject formal academic training nor to deny its worth within limits, but to insist that it is not the only way, that it is not for everyone all the time, that it should not be made a Procrustean bed on which all are forced to lie. It should hardly be necessary to say that the educational needs of different individuals are different and differ at different periods of their lives. Some are never comfortable or fully SEA HISTORY, SUMMER 1982

There is a mistaken notion that schooling and education are the same thing. They are not. productive in a classroom setting. Some are not ready for it at the appointed time. Others outgrow it quickly. And some need to expend physical energy and to manipulate the physical environment, thinking with their hands and the muscles of their backs, as it were, as well as their heads, and reaping enormous satisfaction when they get tangible results as successful craftsmen and builders. There is a mistaken notion that schooling and education are the same thing. They are not. Schooling is, or should be, only a minor and specialized part of the larger educational process. In constricting that process within the narrow confines of formal schooling, we have too often turned schools into detention centers, into holding tanks, as it were, for youthful talent and energies for which our society seems unable to provide wholesome and satisfying outlets. It is an anomaly of this present age that although we idealize youth, we do not trust it. Youth is shielded and pampered but denied responsibility and held back. Maturity is postponed. Not only does the conventional academic routine-classes, lectures, papers, exams, credits, and so forth-tend to be removed from reality, but also its demands on students are narrow and limited, too frequently failing to tap their deeper powers or capabilities or to inspire anything approaching total commitment. Because their involvement is partial and superficial, students tend to take neither their studies nor themselves seriously. Idleness, boredom, and frustration inevitably follow, opening the door to all manner of aberrant and self-destructive impulses and influences . What passes for education, and especially higher education, turns out so often under present circumstances to be mis-education . The building of the Restorationshop at the Maine Maritime Museum demonstrates facts about youth and education which merit our attention. Largely out of recycled materials salvaged from ancient barns, an abandoned railroad machine shop, a burned-out lumberyard, and the like, young, inexperienced volunteers in less than eight months and with a total cash outlay of not more than $24,000 constructed a handsome, substantial 2 Vi story building, 70&#39; x 32&#39;, that has been appraised at more than $124,000. From high schools, college campuses and classrooms the volunteers came for a course such as could not

be found within the halls of academe. As previously demonstrated in The Apprenticeshop at Bath, youth in our time is desperately eager for meaningful activity, starved for it, in fact. They badly need to be needed by others, and are ready to give unstintingly of themselves in direct measure to what is asked. They seek total commitment and will be satisfied with nothing less. Under favorable conditions they are self-reliant, resourceful, inventive, and learn amazingly fast. They are capable of sustained effort, eat up work, and find hard physical labor expended in a good cause satisfying both to body and spirit. It now appears that Veblen came very close to the truth in positing a human instinct of workmanship. It likewise appears that humans are instinctively social, not solitary animals, with an elemental need to serve and support the group and to be approved and emotionally supported by it. Thus, it seems that paired with an instinctive need to achieve excellence in manipulating the physical environment is an instinctive altruism expressed as a deeply rooted need to serve, and to be served by, the group. Primarily because it fulfilled these fundamental human needs, the educational experience provided by the construction of the Restorationshop was one of extraordinary effectiveness and quality, as those who participated have testified. I suggest that the basic principles underlying the success of this project are universally valid and workable and, if inventively applied on a broad scale, could bring about a beneficial transformation in current educational practice. Trust youth, give them room, permit them to develop as whole persons; ask, and set no upper limits in asking, and they will rebuild the world. ..t Mr. Gardner, dean of the traditional boatbuilding movement, is Supervisor of Small Craft at Mystic Seaport Museum. This essay is from his introduction to Barns, Beams &amp; Boats, available for $7.95 from The Restorationshop, 375 Front Street, Bath, Me. 04530. 5