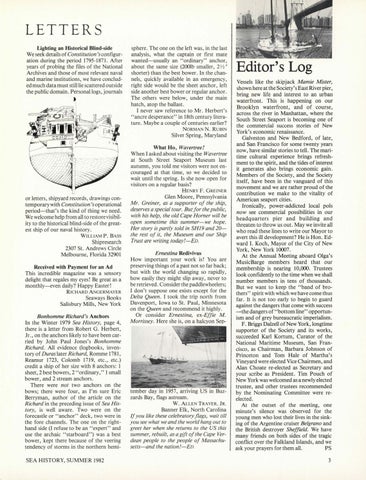 LETTERS Lighting an Historical Blind-side We seek details of Constitution &#39;sconfiguration during the period 1795-1871. After years of probing the files of the National Archives and those of most relevant naval and marine institutions, we have concluded much data must still lie scattered outside the public domain. Personal logs, journals

sphere. The one on the left was, in the last analysis, what the captain or first mate wanted-usually an &quot;ordinary&quot; anchor, about the same size (200lb smaller, 2 Y2&quot; shorter) than the best bower. In the channels, quickly available in an emergency, right side would be the sheet anchor, left side another best bower or regular anchor. The others were below, under the main hatch, atop the ballast. I never saw reference to Mr. Herbert&#39;s &quot;ancre desperance&quot; in 18th century literature. Maybe a couple of centuries earlier? NORMAN N. R UBIN

Silver Spring, Maryland What Ho, Wavertree! When I asked about visiting the Wavertree at South Street Seaport Museum last autumn, you told me visitors were not encouraged at that time, so we decided to wait until the spring. Is she now open for visitors on a regular basis? HENRY F. GREINER

or letters, shipyard records, drawings contemporary with Constitution &#39;s operational period-that&#39;s the kind of thing we need. We welcome help from all to restore visibility to the historical blind-side of the greatest ship of our naval history. WILLIAM P . BASS Shipresearch 2307 St. Andrews Circle Melbourne, Florida 32901 Received with Payment for an Ad This incredible magazine was a sensory delight that regales my eyes! Be great as a monthly-even daily? Happy Easter! RI CHARD ANGERMAYER

Bonhomme Richard&#39;s Anchors In the Winter 1979 Sea History, page 4, there is a letter from Robert G. Herbert, Jr., on the anchors likely to have been carried by John Paul Jones&#39;s Bonhomme Richard. All evidence (logbooks, inventory of Duras later Richard, Romme 1781, Reamur 1723, Colomb 1719, etc., etc.) credit a ship of her size with 8 anchors: I sheet, 2 best bowers, 2 &quot;ordinary,&quot; I small bower, and 2 stream anchors. There were not two anchors on the bows; there were four, as I&#39;m sure Eric Berryman, author of the article on the Richard in the preceding issue of Sea History, is well aware. Two were on the forecastle or &quot;anchor&quot; deck, two were in the fore channels. The one on the righthand side (I refuse to be an &quot;expert&quot; and use the archaic &quot;starboard&quot;) was a best bower, kept there because of the veering tendency of storms in the northern hemiSEA HISTORY, SUMMER 1982

Glen Moore, Pennsylvania Mr. Greiner, as a supporter of the ship, deserves a special tour. But for the public, with his help, the old Cape Horner will be open sometime this summer-we hope. Her story is partly told in SH19 and 20the rest of it, the Museum and our Ship Trust are writing today!-ED.

Ernestina Redivivus How important your work is! You are preserving things of a past not so far back; but with the world changing so rapidly, how easily they might slip away, never to be retrieved . Consider the paddlewheelers; I don&#39;t suppose one exists except for the Delta Queen. I took the trip north from Davenport, Iowa to St. Paul , Minnesota on the Queen and recommend it highly. Or consider Ernestina, ex-Effie M. Morrissey. Here she is, on a halcyon Sep-

tember day in 1957, arriving US in Buzzards Bay, flags astream. W. ALLEN TRAVER, JR. Banner Elk, North Carolina If you like these celebratory flags, wait till you see what we and the world hang out to greet her when she returns to the US this summer, rebuilt, as a gift of the Cape Verdean people to the people of Massachusetts-and the nation!-ED.

Editor&#39;s Log Vessels like the skipjack Mamie Mister, shown here at the Society&#39;s East River pier, bring new life and interest to an urban waterfront. This is happening on our Brooklyn waterfront, and of course, across the river in Manhattan, where the South Street Seaport is becoming one of the commercial success stories of New York&#39;s economic renaissance. Galveston and New Bedford, of late, and San Francisco for some twenty years now, have similar stories to tell. The maritime cultural experience brings refreshment to the spirit, and the tides of interest it generates also brings economic gain. Members of the Society, and the Society itself, have been in the vanguard of this movement and we are rather proud of the contribution we make to the vitality of American seaport cities. Ironically, power-addicted local pols now see commercial possibilities in our headquarters pier and building and threaten to throw us out. May we invite all who read these lines to write our Mayor to avert this ill development? He is Hon. Edward I. Koch, Mayor of the City of New York, New York 10007. At the Annual Meeting aboard Olga&#39;s MusicBarge members heard that our membership is nearing 10,000. Trustees look confidently to the time when we shall number members in tens of thousands. But we want to keep the &quot;band of brothers&#39;&#39; spirit with which we have come thus far. It is not too early to begin to guard against the dangers that come with success ~the dangers of&#39; &#39;bottom line&#39;&#39; opportunism and of grey bureaucratic imperialism. F. Briggs Dalzell of New York, longtime supporter of the Society and its works, succeeded Karl Kortum, Curator of the National Maritime Museum, San Francisco, as Chairman, Barbara Johnson of Princeton and Tom Hale of Martha&#39;s Vineyard were elected Vice Chairmen, and Alan Choate re-elected as Secretary and your scribe as President. Tim Pouch of New York was welcomed as a newly elected trustee, and other trustees recommended by the Nominating Committee were reelected. At the outset of the meeting, one minute&#39;s silence was observed for the young men who lost their lives in the sinking of the Argentine cruiser Belgrano and the British destroyer Sheffield. We have many friends on both sides of the tragic conflict over the Falkland Islands, and we ask your prayers for them all. PS 3