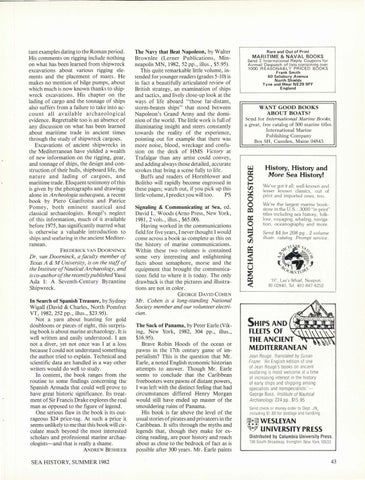 tant examples dating to the Roman period. His comments on rigging include nothing on what has been learned from shipwreck excavations about various rigging elements and the placement of masts. He makes no mention of bilge pumps, about which much is now known thanks to shipwreck excavations. His chapter on the Jading of cargo and the tonnage of ships also suffers from a failure to take into acco unt all ava ilable archaeological evidence . Regrettable too is an absence of any discussion on what has been learned about maritime trade in ancient times through the study of shipwreck cargoes. Excavations of ancient shipwrecks in the Mediterranean have yielded a wealth of new information on the rigging, gear, and tonnage of ships, the design and construction of their hulls, shipboard life, the nature and lading of cargoes, and maritime trade. Eloquent testimony of this is given by the photographs and drawings alone in Archeologia subacquea, a recent book by Piero Gianfrotta and Patrice Pomey, both eminent nautical a nd classical archaeologists. Rouge&#39;s neglect of this information , much of it available before 1975, has significantly marred what is otherwise a valuable introduction to ships and seafaring in the ancient Mediterranean. FREDERICK VAN D OORN INCK

Dr. van Doorninck, a faculty member of Texas A &amp; M University, is on the staff of the Institute ofNautical Archaeology, and is co-author of the recently published Yassi Ada I: A Seventh-Century Byzantine Shipwreck .

The Navy that Beat Napoleon, by Walter Brownlee (Lerner Publications, Minneapolis MN, 1982, 52 pp ., illus., $5 .95). This quite remarkable little volume, intended for younger readers (grades 5-10) is in fact a beautifully articulated review of British strategy, an examination of ships and tactics, and lively close-up look at the ways of li fe aboard &quot; those far-distant, storm-beaten ships&quot; that stood between Napoleon&#39;s Grand Army and the dominion of the world. The little work is full of illuminating insight and steers constantly towards the reality of the experience, pointing out for example that there was more noise, blood , wreckage and confusion on the deck of HMS Victory at Trafalgar than any artist could convey, and adding always those detailed , accurate strokes that bring a scene full y to li fe. Buffs and readers of Hornblower and Bolitho will rapidly become engrossed in these pages; watch out, if you pick up this little volume, I predict you will too. PS Signaling &amp; Communicating at Sea, ed. David L. Woods (Arno Press, New York, 1981, 2 vols. , illus., $65.00). Having worked in the communications field for fi ve years, I never thought 1wo uld come across a book as complete as this on the history of marine communications. Within these two volumes is contained some very interesting and enlightening facts about semaphore, morse and the equipment that brought the communications field to where it is today. The only drawback is that the pictures and illustrations are not in color.

In Search of Spanish Treasure, by Sydney Wigall (David &amp; Charles, North Pomfret VT, 1982, 252 pp. , illus., $23.95). Not a yarn about hunting for gold doubloons or pieces of eight, this surprising book is about marine archaeology. It is well written and easily understood. I am not a diver, yet not once was I at a loss because I could not understand something the author tried to explain. Technical and scientific data are handled in a way other writers would do well to study. In content, the book ranges from the routine to some findings concerning the Spanish Armada that could well prove to have great historic significance . Its treatment of Sir Francis Drake explores the real man as opposed to the figure of legend. One serious flaw in the book is its outrageous $24 price-tag. At such a price it seems unlikely to me that this book will circulate much beyond the most interested scholars and professional marine archaeologists-and that is really a shame. ANDREW B ES H EER

Mr. Cohen is a long-standing National Society member and our volunteer electrician. The Sack of Panama, by Peter Earle (Viking, New York, 1982, 304 pp ., illus., $16.95). Brave Robin Hoods of the ocean or pawns in the 17th century game of imperialism? This is the question that Mr. Earle, a noted English economic historian attempts to answer. Though Mr. Earle seems to conclude that the Caribbean freebooters were pawns of distant powers, I was left with the distinct feeling that had circumstances differed Henry Morgan would still have ended up master of the smouldering ruins of Panama. His book is far above the level of the usual stories of pirates and privateers in the Caribbean . It sifts through the myths and legends that, though they make for exciting reading, are poor history and reach about as close to the bedrock of fact as is possible after 300 years. Mr. Earle paints

SHIPS AND ~~=-:~1 FLEETS OF THE ANCIENT MEDITERRANEAN Jean Rouge. Translated by Susan Frazer. ··An English edition of one of Jean Rouge ·s books on ancient seafaring 1s most welcome at a time of increasing interest in the histo ry of ea rly ships and shippi ng amon g specialists an d non specialists: Geo rg e Bass. Institute of Nautical Archaeology 224 pp .. $15 95 Send check or money order to Dept JN , including S1.80 for postage and handling .