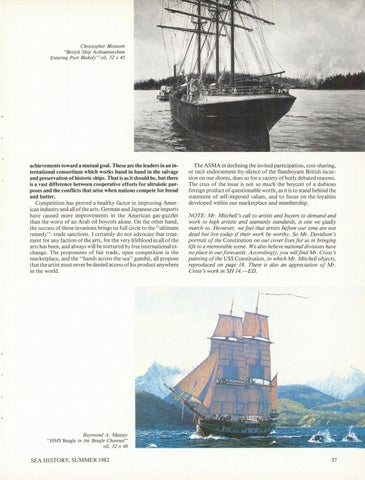 achievements toward a mutual goal. These are the leaders in an international consortium which works hand in hand in the salvage and preservation of historic ships. That is as it should be, but there is a vast difference between cooperative efforts for altruistic purposes and the conflicts that arise when nations compete for bread and butter. Competition has proved a healthy factor in improving American industry and all of the arts. German and Japanese car imports have caused more improvements in the American gas-guzzler than the worst of an Arab oil boycott alone. On the other hand, the success of those invasions brings us full circle to the' 'ultimate remedy": trade sanctions . I certainly do not advocate that treatment for any faction of the arts, for the very lifeblood in all of the arts has been, and always will be nurtured by free international exchange. The proponents of fair trade, open competition in the marketplace, and the "hands across the sea" gambit, all propose that the artist must never be denied access of his product anywhere in the world.

The ASMA in declining the invited participation, cost-sharing, or tacit endorsement-by-silence of the flamboyant British incursion on our shores, does so for a variety of hotly debated reasons . The crux of the issue is not so much the boycott of a dubious foreign product of questionable worth, as it is to stand behind the statement of self-imposed values, and to focus on the loyalties developed within our marketplace and membership.

NOTE: Mr. Mitchell's call to artists and buyers to demand and work to high artistic and seamanly standards, is one we gladly march to. However, we feel that artists before our time are not dead but live today if their work be worthy. So Mr. Davidson's portrait of the Constitution on our cover lives for us in bringing life to a memorable scene. We also believe national divisions have no place in ourforecastle. Accordingly, you will find Mr. Cross's painting of the USS Constitution, to which Mr. Mitchell objects, reproduced on page 18. There is also an appreciation of Mr. Cross's work in SH 14.-ED.