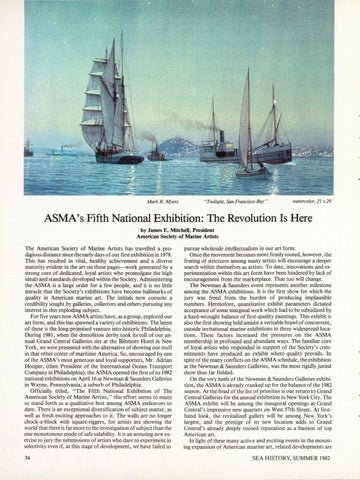 ASMA&#39;s Fifth National Exhibition: The Revolution Is Here by James E. MitcheU, President American Society of Marine Artists The American Society of Marine Artists has travelled a prodigious distance since the early days of our first exhibition in 1978. This has resulted in vital, healthy achievement and a diverse maturity evident in the art on these pages-work generated by a strong core of dedicated, loyal artists who promulgate the high ideals and standards developed within the Society. Administering the ASMA is a large order for a few people, and it is no little miracle that the Society&#39;s exhibitions have become hallmarks of quality in American marine art. The initials now connote a credibility sought by galleries, collectors and others pursuing any interest in this exploding subject. For five years now ASMA artists have, as a group, explored our art form, and this has spawned a variety of exhibitions. The latest of these is the long-promised venture into historic Philadelphia. During 1981, when the demolition derby took its toll of our annual Grand Central Galleries site at the Biltmore Hotel in New York, we were presented with the alternative of showing our stuff in that other center of maritime America. So, encouraged by one of the ASMA&#39;s most generous and loyal supporters, Mr. Adrian Hooper, (then President of the International Ocean Transport Company in Philadelphia), the ASMA opened the first of its 1982 national exhibitions on April 16 at Newman &amp; Saunders Galleries in Wayne, Pennsylvania, a suburb of Philadelphia. Officially titled, &quot;The Fifth National Exhibition of The American Society of Marine Artists,&quot; this effort seems to many to stand forth as a qualitative best among ASMA endeavors to date. There is an exceptional diversification of subject matter, as well as fresh exciting approaches to it. The walls are no longer chock-a-block with square-riggers, for artists are showing the world that there is far more to the investigation of subject than the one monotonous mode of safe salability. It is an arousing new exercise to jury the submissions of artists who dare to experiment in selectivity even if, at this stage of development, we have failed to 34

pursue wholesale intellectualism in our art form. Once the movement becomes more firmly rooted, however, the freeing of strictures among many artists will encourage a deeper search within themselves as artists. To date, innovations and experimentation within this art form have been hindered by lack of encouragement from the marketplace. That too will change. The Newman &amp; Saunders event represents another milestone among the ASMA exhibitions. It is the first show for which the jury was freed from the burden of producing implausible numbers. Heretofore, quantitative exhibit parameters dictated acceptance of some marginal work which had to be subsidized by a hard-wrought balance of first-quality paintings. This exhibit is also the first showing held amidst a veritable brawl of concurrent, outside invitational marine exhibitions in three widespread locations. These factors increased the pressures on the ASMA membership in profound and abundant ways. The familiar core of loyal artists who responded in support of the Society&#39;s commitments have produced an exhibit where quality prevails. In spite of the many conflicts on the ASMA schedule, the exhibition at the Newrrian &amp; Saunders Galleries, was the most rigidly juried show thus far fielded. On the very heels of the Newman &amp; Saunders Galleries exhibition, the ASMA is already cranked up for the balance of the 1982 season. At the head of the list of priorities is our return to Grand Central Galleries for the annual exhibition in New York City. The ASMA exhibit will be among the inaugural openings at Grand Central&#39;s impressive new quarters on West 57th Street. At firsthand look, the revitalized gallery will be among New York&#39;s largest, and the prestige of its new location adds to Grand Central&#39;s already deeply rooted reputation as a bastion of top American art. In light of these many actiwe and exciting events in the mounting expansion of American mlarine art, related developments are :SEA HISTORY, SUMMER 1982