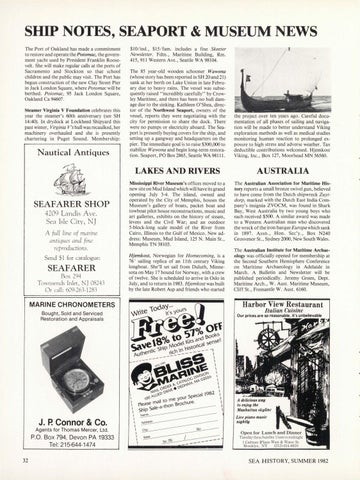 The Port of Oakland has made a commitment to restore and operate the Potomac, the government yacht used by President Franklin Roosevelt. She will make regular calls at the ports of Sacramento and Stockton so that school children and the public may visit. The Port has begun construction of the new Clay Street Pier in Jack London Square, where Potomac will be berthed . Potomac, 95 Jack London Square, Oakland Ca 94607. Steamer Virginia V Foundation celebrates this year the steamer &#39;s 60th anniversary (see SH 14:40). In drydock at Lockheed Shipyard this past winter, Virginia V&#39;s hull was recaulked, her machinery overhauled and she is presently chartering in Puget Sound . Membership :

The 85 year-old wooden schooner Wawona (whose story has been reported in SH 20and 21) sank at her berth on Lake Union in late February due to heavy rains. The vessel was subsequently raised &quot; incredibly carefully&quot; by Crowley Maritime, and there has been no hull damage due to the sinking. Kathleen O&#39;Shea, director of the Northwest Seaport, owners of the vessel, reports they were negotiating with the city for permission to share the dock . There were no pumps or electricity aboard. The Seaport is presently buying covers for the ship, and setting up a gangway and headquarters on the pier. The immediate goal is to raise $300,000 to stabilize Wawona and begin long-term restoration. Seaport, PO Box 2865, Seattle WA 98111.

the project over ten years ago. Careful documentation of all phases of sailing and navigation will be made to better understand Viking exploration methods as well as medical studies monitoring human reaction to prolonged exposure to high stress and adverse weather. Tax deductible contributions welcomed. Hjemkost Viking, Inc., Box 127, Moorhead MN 56560.

Mississippi River Museum&#39;s offices moved to a new site on Mud Island which will have its grand opening July 3-4. The island, owned and operated by the City of Memphis, houses the Museum &#39;s gallery of boats, packet boat and towboat pilot house reconstructions, music and art galleries, exhibits on the history of steam, levees and the Civil War; and an outdoor 5-block-long scale model of the River from Cairo, Illinois to the Gulf of Mexico. New address: Museum, Mud Island, 125 N. Main St., Memphis TN 38103 .

The Australian Association for Maritime History reports a small bronze swivel gun, believed to have come from the Dutch shipwreck Zuytdorp, marked with the Dutch East India Company&#39;s insignia ZVOCM, was found in Shark Bay, West Australia by two you ng boys who each received $500. A similar award was made to a Western Australian man who discovered the wreck of the iron barque Europa which sank in 1897 . Assn., Hon . Sec&#39;y ., Box N240 Grosvenor St. , Sydney 2000, New South Wales.

Hjemkost, Norwegian for Homecoming, is a 76 &#39; sailing replica of an 11th century Viking longboat. She&#39;ll set sail from Duluth , Minnesota on May 17 bound for Norway, with a crew of twelve. She is scheduled to arrive in Oslo in July, and to return in 1983. Hjemkost was built by the late Robert Asp and friends who started

Our prices are so reasonable, it&#39;s unbelievable