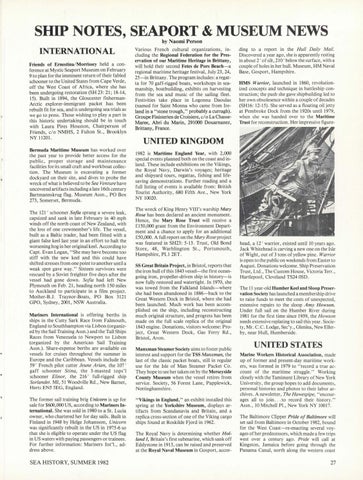 INTERNATIONAL Friends of Ernestina/Morrissey held a conference at Mystic Seaport Museum on February 9 to plan for the imminent return of their fabled schooner to the United States from Cape Verde, off the West Coast of Africa, where she has been undergoing restoration (SH 23 : 21; 18-14, 15). Built in 1894, the Gloucester fishermanArctic explorer-immigrant packet has been rebuilt fit for sea, and is undergoing sea trials as we go to press. Those wishing to play a part in this historic undertaking should be in touch with Laura Pires Houston, Chairperson of Friends, c/ o NMHS, 2 Fulton St., Brooklyn NY 11201. Bermuda Maritime Museum has worked over the past year to provide better access for the public, proper storage and maintenance facilities for its small craft and work boat collection. The Museum is excavating a former dockyard on their site, and dives to probe the wreck of what is believed to be Sea Venture have uncovered artifacts including a late 16th century Bartmannskrug flag . Museum Assn., PO Box 273, Somerset, Bermuda. The 121 &#39; schooner Sofia sprang a severe leak, capsized and sank in late February in 40 mph winds off the north coast of New Zealand, with the loss of one crewmember&#39;s life . The vessel, built as a Baltic trader, had been fitted with a giant false keel last year in an effort to halt the worsening hog in her original keel. According to Capt. Evan Logan, &quot;She may have become too stiff with the new keel and this could have shifted stresses from one point to another until a weak spot gave way.&quot; Sixteen survivors were rescued by a Soviet freighter five days after the vessel had gone down. Sofia had left New Plymouth on Feb. 21, heading north 150 miles to Auckland to participate in a film project. Mother-B.J. Traynor-Boats, PO Box 3121 GPO, Sydney, 2001, NSW Australia. Mariners International is offering berths in ships in the Cutty Sark Race from Falmouth, England to Southhampton via Lisbon (organized by the Sail Training Assn.) and the Tall Ships Races from Venezuela to Newport to Lisbon (organized by the American Sail Training Assn.). Share-expense berths are available on vessels for cruises throughout the summer in Europe and the Caribbean. Vessels include the 59 &#39; French pilot cutter Jeune Arian, the 107 &#39; gaff schooner Stina, the 3-masted tops &#39; ! schooner Elinor, the 216 &#39; full-rigged ship Sorlandet. MI, 51 Woodville Rd ., New Barnet, Herts ENS 5EG, England . The former sail training brig Unicorn is up for sale for $600,000 US, according to Mariners International. She was sold in 1980 to a St. Lucia owner, who chartered her for day sails. Built in Finland in 1948 by Helge Johansson, Unicorn was significantly rebuilt in the US in 1975-6 so that she is eligible to operate under the US flag in US waters with paying passengers or trainees. For further information: Mariners Int&#39;!., address above.

ding to a report in the Hull Daily Mail. Discovered a year ago, she is apparently resting in about 2 &#39; of silt, 210&#39; below the surface, with a couple of holes in her hull. Museum, HM Naval Base, Gosport, Hampshire. HMS Warrior, launched in 1860, revolutionized concepts and technique in battleship construction; the push she gave shipbuilding led to her own obsolesence within a couple of decades (SHl6: 12-15). She served as a floating oil jetty at Pembroke Dock from the 1920s until 1979, when she was handed over to the Maritime Trust for reconstruction. Her impressive figure-

UNITED KINGDOM 1982 is Maritime England Year, with 2,000 special events planned both on the coast and inland. These include exhibitions on the Vikings, the Royal Navy, Darwin&#39;s voyages; heritage and shipyard tours, regattas, fishing and lifesaving demonstrations. Further reading and a full listing of events is available from: British Tourist Authority, 680 Fifth Ave., New York NY 10020. The wreck of King Henry VIII &#39;s warship Mary Rose has been declared an ancient monument. Hence, the Mary Rose Trust will receive a ÂŁ150,000 grant from the Environment Department and a chance to apply for an additional ÂŁ50,000. A full report on the Mary Rose project was featured in SH23: 5-13. Trust, Old Bond Store, 48 , Warblington St., Portsmouth, Hampshire, PL! 2ET. SS Great Britain Project, in Bristol, reports that the iron hull of this 1843 vessel-the first oceangoing iron, propeller-driven ship in history-is now fully restored and watertight. In 1970, she was towed from the Falkland Islands-where she had been abandoned in 1886-back to the Great Western Dock in Bristol, where she had been launched . Much work has been accom. plished on the ship, including reconstructing much original structure, and progress has been made on the full scale replica of the original 1843 engine. Donations, visitors welcome: Project, Great Western Dock, Gas Ferry Rd., Bristol, Avon. Manxman Steamer Society aims to foster public interest and support for the TSS Manxman, the last of the classic packet boats, still in regular use for the Isle of Man Steamer Packet Co. They hope to see her taken on by the Merseyside County Museum when the vessel retires from service. Society, 56 Forest Lane, Papplewick, Nottinghamshire. &quot;Vikings in England,&quot; an exhibit installed this spring at the Yorkshire Museum, displays artifacts from Scandanavia and Britain, and a replica cross-section of one of the Viking cargo ships found at Roskilde Fjord in 1962. The Royal Navy is determining whether Holland 1, Britain&#39;s first submarine, which sank off Eddystone in 1913, can be raised and preserved at the Royal Naval Museum in Gosport, accor-

head, a 12 &#39; warrior, existed until 10 years ago. Jack Whitehead is carving a new one on the Isle of Wight, out of 3 tons of yellow pine. Warrior is open to the public on weekends from Easter to August. Donations welcome. Ship Preservation Trust, Ltd., The Custom House, Victoria Terr., Hartlepool, Cleveland TS24 OSD. The 11 year-old Humber Keel and Sloop Preservation Society has launched a membership drive to raise funds to meet the costs of unexpected, extensive repairs to the sloop Amy Howson . Under full sail on the Humber River during 1981 for the first time since 1939, the Howson needs extensive replating to sail this year. Society, Mr. C.C. Lodge, Sec&#39;y., Glenlea, New Ellerby, near Hull, Humberside.

UNITED STATES Marine Workers Historical Association, made up of former and present-day maritime workers, was formed in 1979 to &quot;record a true account of the maritime struggle.&quot; Working closely with the Tamiment Library of New York University, the group hopes to add documents, personal histories and photos to their labor archives. A newsletter, The Hawespipe, &quot;encourages all to join . . . to record their history.&quot; Assn., 10 Mitchell Pl., New York NY 10017. The Baltimore Clipper Pride of Baltimore will set sail from Baltimore in October 1982, bound for the West Coast-re-enacting several voyages of her predecessors, which made a few trips west over a century ago . Pride will call at Kingston, Jamaica before going through the Panama Canal, north along the western coast