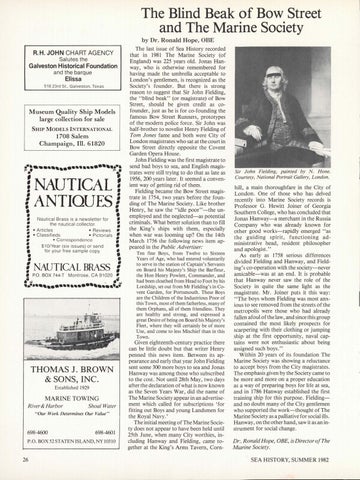 The last issue of Sea History recorded that in 1981 The Marine Society (of England) was 225 years old. Jonas Hanway, who is otherwise remembered for having made the umbrella acceptable to London&#39;s gentlemen, is recognized as the Society&#39;s founder. But there is strong reason to suggest that Sir John Fielding, the &quot;blind beak&quot; (or magistrate) of Bow Street, should be given credit as cofounder, just as he is for co-founding the famous Bow Street Runners, prototypes of the ·modem police force. Sir John was half-brother to novelist Henry Fielding of Tom Jones fame and both were City of London magistrates who sat at the court in Bow Street directly opposite the Covent Garden Opera House . John Fielding was the first magistrate to send bad boys to sea, and English magistrates were still trying to do that as late as 1956, 200 years later. It seemed a convenient way of getting rid of them . Fielding became the Bow Street magistrate in 1754, two years before the founding of The Marine Society. Like brother Henry, he saw the &quot;idle poor&quot;-the unemployed and the neglected-as potential criminals. What better solution than to fill the King&#39;s ships with them, especially when war was looming up? On the 14th March 1756 the following news item appeared in the Public Advertiser: Ten fine Boys, from Twelve to Sixteen Years of Age, who had entered voluntarily to serve in the station of Captain&#39;s Servants on Board his Majesty&#39;s Ship the Barfleur, the Hon Henry Powlett, Commander, and had been cloathed from Head to Foot by his Lordship, set out from Mr Fielding&#39;s in Covent Garden, for Portsmouth. These Boys are the Children of the Industrious Poor of this Town, most of them fatherless, many of them Orphans, all of them friendless. They are healthy and strong, and expressed a great Desire of being on Board his Majesty&#39;s Fleet, where they will certainly be of more Use, and come to less Mischief than in this Town .

Given eighteenth-century practice there can be little doubt but that writer Henry penned this news item. Between its appearance and early that year John Fielding sent some 300 more boys to sea and Jonas Hanway was among those who subscribed to the cost. Not until 28th May, two days after the declaration of what is now known as the Seven Years War, did the name of The Marine Society appear in an advertisement which called for subscriptions &#39;for fitting out Boys and young Landsmen for the Royal Navy.&#39; The initial meeting of The Marine Society does not appear to have been held until 25th June, when many City worthies, including Hanway and Fielding, came together at the King&#39;s Arms Tavern, Com-

hill, a main thoroughfare in the City of London. One of those who has delved recently into Marine Society records is Professor G. Hewitt Joiner of Georgia Southern College, who has concluded that Jonas Hanway-a merchant in the Russia Company who was already known for other good works-rapidly emerged &quot;as the guiding spirit, functioning administrative head, resident philosopher and apologist.&quot; As early as 1758 serious differences divided Fielding and Hanway, and Fielding&#39;s co-operation with the society-never amicable-was at an end. It is probable that Hanway never saw the role of the Society in quite the same light as the magistrate. Mr. Joiner puts it this way: &quot;The boys whom Fielding was most anxious to see removed from the streets of the metropolis were those who had already fallen afoul of the law, and since this group contained the most likely prospects for scarpering with their clothing or jumping ship at the first opportunity, naval captains were not enthusiastic about being assigned such boys .&quot; Within 20 years of its foundation The Marine Society was showing a reluctance to accept boys from the City magistrates . The emphasis given by the Society came to be more and more on a proper education as a way of preparing boys for life at sea, and in 1786 Hanway established the first training ship for this purpose. Fieldingand no doubt many of the City gentlemen who supported the work-thought of The Marine Society as a palliative for social ills . Hanway, on the other hand, saw it as an instrument for social change.