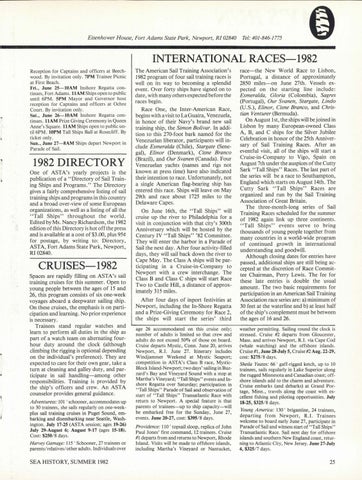 1982 DIRECTORY One of ASTA&#39;s yearly projects is the publication of a &quot;Directory of Sail Training Ships and Programs.&quot; The Directory gives a fairly comprehensive listing of sail training ships and programs in this country and a broad over-view of some European organizations, as well as a listing of all the &quot;Tall Ships&quot; throughout the world. Edited by Ms. Nancy Richardson, the 1982 edition of this Directory is hot off the press and is available at a cost of $3.00, plus 95&lt;1: for postage, by writing to: Directory, ASTA, Fort Adams State Park, Newport, RI 02840.

CRUISES-1982 Spaces are rapidly filling on ASTA&#39;s sail training cruises for this summer. Open to young people between the ages of 15 and 26, this program consists of six one-week voyages aboard a deepwater sailing ship . On these cruises, the emphasis is on participation and learning. No prior experience is necessary. Trainees stand regular watches and learn to perform all duties in the ship as part of a watch team on alternating fourhour duty around the clock (although climbing the rigging is optional depending on the individual&#39;s preference). They are expected to care for their own gear, take a turn at cleaning and galley duty, and participate in sail handling-among other responsibilities. Training is provided by the ship&#39;s officers and crew. An ASTA counselor provides general guidance. Adventuress: 101 &#39; schooner, accommodates up to 30 trainees, she sails regularly on one-weekplus sail training cruises in Puget Sound, embarking and disembarking near Seattle, Washington. July 17-25 (ASTA session; ages 19-26) July 29-August 6; August 9-17 (ages 15-18). Cost: $250/ 8 days. Harvey Gamage: 115 &#39; Schooner, 27 trainees or parents/ relatives/ other adults. Individuals over

The American Sail Training Association&#39;s 1982 program of four sail training races is well on its way to becoming a splendid event. Over forty ships have signed on to date, with many others expected before the races begin. Race One, the Inter-American Race, begins with a visit to La Guaira, Venezuela, in honor of their Navy&#39;s brand new sail training ship, the Simon Bolivar. In addition to this 270-foot bark named for the Venezuelan liberator, participants will include Esmeralda (Chile), Stargate (Senegal), Elinor (Denmark), Cisne Branco (Brazil), and Our Svanen (Canada). Four Venezuelan yachts (names and rigs not known at press time) have also indicated their intention to race. Unfortunately, not a single American flag-bearing ship has entered this race. Ships will leave on May 29th and race about 1725 miles to the Delaware Capes. On June 16th, the &quot;Tall Ships&quot; will cruise up the river to Philadelphia for a visit in conjunction with that city&#39;s 300th Anniversary which will be hosted by the Century IV &quot;Tall Ships&quot; &#39;82 Committee. They will enter the harbor in a Parade of Sail the next day. After four activity-filled days, they will sail back down the river to Cape May. The Class A ships will be participating in a Cruise-in-Company to Newport with a crew interchange. The Class B and Class C ships will start Race Two to Castle Hill, a distance of approximately 315 miles. After four days of inport festivities at Newport, including the In-Shore Regatta and a Prize-Giving Ceremony for Race 2, the ships will start the series&#39; third age 26 accommodated on this cruise only; number of adults is limited so that crew and adults do not exceed 500Jo of those on board. Cruise departs Mystic, Conn. June 20, arrives Newport, R.I. June 27. Itinerary includes Windjammer Weekend at Mystic Seaport; competition in ASTA&#39;s Class B race, MysticBlock Island-Newport; two days&#39; sailing in Buzzard&#39;s Bay and Vineyard Sound with a stop at Martha&#39;s Vineyard; &quot;Tall Ships&quot; events and Inshore Regatta over Saturday; participation in &quot;Tall Ships&quot; Parade of Sail and observation of start of &quot;Tall Ships&quot; Transatlantic Race with return to Newport. A special feature is that parents of trainees-up to ship capacity-will be embarked free for the Sunday, June 27, events. June 20-27, cost: $395/8 days. Providence: 110 &#39; topsail sloop, replica of John Paul Jones&#39; first command, 12 trainees. Cruise #1 departs from and returns to Newport, Rhode Island. Visits will be made to offshore islands, including Martha&#39;s Vineyard or Nantucket,

race-the New World Race to Lisbon, Portugal, a distance of approximately 2850 miles-on June 27th. Vessels expected on the starting line include: Esmeralda, Gloria (Colombia), Sagres (Portugal), Our Svanen, Stargate, Lindo (U.S.), Elinor, Cisne Branco, and Christian Venturer (Bermuda). On August 1st, the ships will be joined in Lisbon by many European-owned Class A, B, and C ships for the Silver Jubilee Celebration in honor of the 25th Anniversary of Sail Training Races. After an eventful visit, all of the ships will start a Cruise-in-Company to Vigo, Spain on August 7th under the auspices of the Cutty Sark &quot;Tall Ships&quot; Races. The last part of the series will be a race to Southampton, England which starts on August 14th. The Cutty Sark &quot;Tall Ships&quot; Races are organized and run by the Sail Training Association of Great Britain. The three-month-long series of Sail Training Races scheduled for the summer of 1982 again link up three continents. &quot;Tall Ships&quot; events serve to bring thousands of young people together from many countries in a world-wide program of continued growth in international understanding and goodwill. Although closing dates for entries have passed, additional ships are still being accepted at the discretion of Race Committee Chairman, Perry Lewis. The fee for these late entries is double the usual amount. The two basic requirements for participation in an American Sail Training Association race series are: a) minimum of 30 feet at the waterline and b) at least half of the ship&#39;s complement must be between the ages of 16 and 26. weather permitting. Sailing round the clock is stressed . Cruise #2 departs from Gloucester, Mass. and arrives Newport, R.I. via Cape Cod (whale watching) and the offshore islands. Cruise #1, June 28-July 5, Cruise #2 Aug. 22-29, cost: $275/8 days. Sheila Yeates: 66&#39; gaff-rigged ketch, up to 10 trainees, sails regularly in Lake Superior along the rugged Minnesota and Canadian coast; offshore islands add to the charm and adventure. Cruise embarks (and debarks) at Grand Portage, Minn ., travels along the coast with excellent fishing and piloting opportunities. July 18-25, $325/8 days. Young America: 130&#39; brigantine, 24 trainees, departing from Newport, R. I. Trainees welcome to board early June 27, participate in Parade of Sail and witness start of &quot;Tall Ships&quot; Transatlantic Race. Sail next day for offshore islands and southern New England coast, returning to Atlantic City, New Jersey. June 27-July 4, $325/ 7 days.