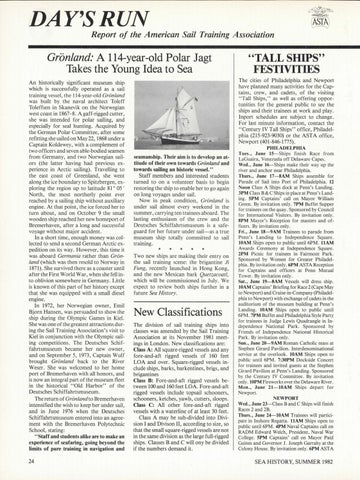 Gron/and: A 114-year-old Polar Jagt Takes the Young Idea to Sea An historically significant museum ship which is successfully operated as a sail training vessel, the 114-year-old Gron/and was built by the naval architect Toleff Toleffsen in Skanevik on the Norwegian west coast in 1867-8. A gaff-rigged cutter, she was intended for polar sailing, and especially for seal hunting. Acquired by the German Polar Committee, after some refitting she sailed on May 22, 1868 under a Captain Koldewey, with a complement of two officers and seven able-bodied seamen from Germany, and two Norwegian sailors (the latter having had previous experience in Arctic sailing). Travelling to the east coast of Greenland, she went along the ice boundary to Spitzbergen, exploring the region up to latitude 81 Â° 05&#39; North, the most northerly point ever reached by a sailing ship without auxiliary engine. At that point, the ice forced her to turn about, and on October 9 the small wooden ship reached her new homeport of Bremerhaven, after a long and successful voyage without major accident. In a short time, enough money was collected to send a second German Arctic expedition on its way. However, this time it was aboard Germania rather than Gron/and (which was then resold to Norway in 1871). She survived there as a coaster until after the First World War, when she fell into oblivion somewhere in Germany. Little is known of this part of her history except that she was equipped with a small diesel engine. In 1972, her Norwegian owner, Emil Bjorn Hansen, was persuaded to show the ship during the Olympic Games in Kiel. She was one of the greatest attractions during the Sail Training Association&#39;s visit to Kiel in conjunction with the Olympic sailing competitions. The Deutsches Schiffahrtsmuseum became her new owner, and on September 5, 1973, Captain Wulf brought Gron/and back to the River Weser. She was welcomed to her home port of Bremerhaven with all honors, and is now an integral part of the museum fleet in the historical &quot;Old Harbor&quot; of the Deutsches Schiffahrtsmuseum. The return of Gron/and to Bremer haven intensified the wish to keep her under sail, and in June 1976 when the Deutsches Schiffahrtsmuseum entered into an agreement with the Bremerhaven Polytechnic School, stating: &#39;&#39;Staff and students alike are to make an experience of seafaring, going beyond the limits of pure training in navigation and 24

&#39;&#39;TALL SHIPS&#39;&#39; FESTIVITIES The cities of Philadelphia and Newport have planned many activities for the Captains, crew, and cadets, of the visiting &quot;Tall Ships,&quot; as well as offering opportunities for the general public to see the ships and their trainees at work and play. Inport schedules are subject to change. For last minute information, contact the &quot;Century IV Tall Ships&quot; office, Philadelphia (215-923-9030) or the ASTA office, Newport (401-846-1775).

seamanship. Their aim is to develop an attitude of their own towards Gron/and and towards sailing an historic vessel.&quot; Staff members and interested students turned to on a volunteer basis to begin restoring the ship to enable her to go again on long voyages under sail. Now in peak condition, Gron/and is under sail almost every weekend in the summer, carrying ten trainees aboard. The lasting enthusiasm of the crew and the Deutsches Schiffahrtsmuseum is a safeguard for her future under sail-as a true museum ship totally committed to sail training.

Two new ships are making their entry on the sail training scene: the brigantine Ji Fung, recently launched in Hong Kong, and the new Mexican bark Quetzacoatl, which will be commissioned in July. We expect to review both ships further in a future Sea History.