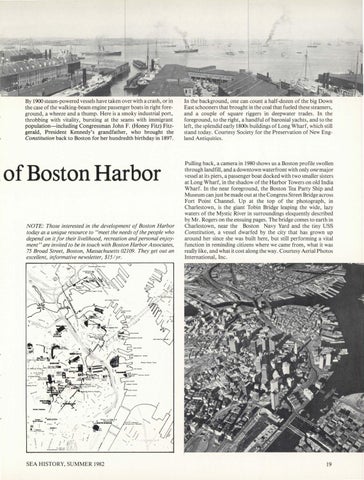 By 1900 steam-powered vessels have taken over with a crash, or in the case of the walking-beam engine passenger boats in right foreground, a wheeze and a thump. Here is a smoky industrial port, throbbing with vitality, bursting at the seams with immigrant population-including Congressman John F. (Honey Fitz) Fitzgerald, President Kennedy&#39;s grandfather, who brought the Constitution back to Boston for her hundredth birthday in 1897.

.of Boston Harbor NOTE: Those interested in the development of Boston Harbor today as a unique resource to &quot; meet the needs of the people who depend on it for their livelihood, recreation and personal enjoyment&quot; are invited to be in touch with Boston Harbor Associates, 75 Broad Street, Boston, Massachusetts 02109. They get out an excellent, informative newsletter, $15 / yr.

In the background, one can count a half-dozen of the big Down East schooners that brought in the coal that fueled these steamers, and a couple of square riggers in deepwater trades. In the foreground, to the right, a handful of baronial yachts; and to the left, the splendid early 1800s buildings of Long Wharf, which still stand today. Courtesy Society for the Preservation of New England Antiquities.

Pulling back, a camera in 1980 shows us a Boston profile swollen through landfill, and a downtown waterfront with only one major vessel at its piers, a passenger boat docked with two smaller sisters at Long Wharf, in the shadow of the Harbor Towers on old India Wharf. In the near foreground, the Boston Tea Party Ship and Museum can just be made out at the Congress Street Bridge across Fort Point Channel. Up at the top of the photograph, in Charlestown, is the giant Tobin Bridge leaping the wide, lazy waters of the Mystic River in surroundings eloquently described by Mr. Rogers on the ensuing pages. The bridge comes to earth in Charlestown, near the Boston Navy Yard and the tiny USS Constitution, a vessel dwarfed by the city that has grown up around her since she was built here, but still performing a vital function in reminding citizens where we came from, what it was really like, and what it cost along the way . Courtesy Aerial Photos International , Inc .