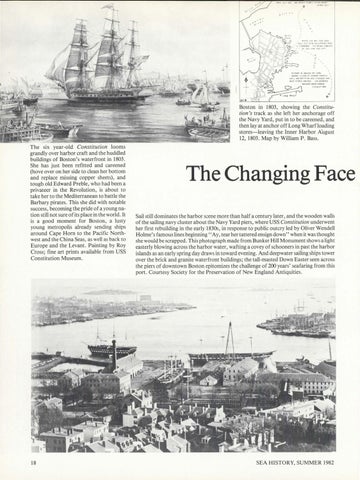 Boston in 1803, showing the Constitution&#39;s track as she left her anchorage off the Navy Yard, put in to be careened , and then lay at anchor off Long Wharf loading stores-leaving the Inner Harbor August 12, 1803. Map by William P. Bass. The six year-old Constitution looms grandly over harbor craft and the huddled buildings of Boston&#39;s waterfront in 1803. She has just been refitted and careened (hove over on her side to clean her bottom and replace missing copper sheets), and tough old Edward Preble, who had been a privateer in the Revolution, is about to take her to the Mediterranean to battle the Barbary pirates. This she did with notable success, becoming the pride of a young nation still not sureofits place in the world. It is a good moment for Boston, a lusty young metropolis already sending ships around Cape Horn to the Pacific Northwest and the China Seas, as well as back to Europe and the Levant. Painting by Roy Cross; fine art prints available from USS Constitution Museum.

The Changing Face Sail still dominates the harbor scene more than half a century later, and the wooden walls of the sailing navy cluster about the Navy Yard piers, where USS Constitution underwent her first rebuilding in the early 1830s, in response to public outcry led by Oliver Wendell Holme&#39;s famous lines beginning &#39;&#39; Ay, tear her tattered ensign down&#39;&#39; when it was thought she would be scrapped. This photograph made from Bunker Hill Monument shows a light easterly blowing across the harbor water, wafting a covey of schooners in past the harbor islands as an early spring day draws in toward evening. And deepwater sailing ships tower over the brick and granite waterfront buildings; the tall-masted Down Easter seen across the piers of downtown Boston epitomizes the challenge of 200 years&#39; seafaring from this port. Courtesy Society for the Preservation of New England Antiquities.