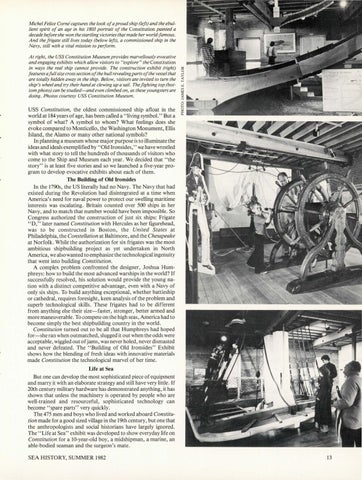 Michel Felice Corne captures the look of a proud ship (left) and the ebullient spirit of an age in his 1803 portrait of the Constitution painted a decade before she won the startling victories that made her world-famous. And the frigate still lives today (below left), a commissioned ship in the Navy, still with a vital mission to perform. At right, the USS Constitution Museum provides marvellously evocative and engaging exhibits which allow visitors to &quot;explore&quot; the Constitution in ways the real ship cannot provide. The construction exhibit (right) features a full size cross section of the hull revealing parts of the vessel that are totally hidden away in the ship. Below, visitors are invited to turn the ship&#39;s wheel and try their hand at clewing up a sail. The fighting top (bottom photo) can be studied-and even climbed on, as these youngsters are doing. Photos courtesy USS Constitution Museum.

USS Constitution, the oldest commissioned ship afloat in the world at 184 years ofage, has been called a &quot;living symbol.&quot; But a symbol of what? A symbol to whom? What feelings does she evoke compared to Monticello, the Washington Monument, Ellis Island, the Alamo or many other national symbols? In planning a museum whose major purpose is to illuminate the ideas and ideals exemplified by &#39;&#39;Old Ironsides,&#39;&#39; we have wrestled with what story to tell the hundreds of thousands of visitors who come to the Ship and Museum each year. We decided that &quot;the story&quot; is at least five stories and so we launched a five-year program to develop evocative exhibits about each of them.

The Building of Old Ironsides

In the 1790s, the US literally had no Navy. The Navy that had existed during the Revolution had disintegrated at a time when America&#39;s need for naval power to protect our swelling maritime interests was escalating. Britain counted over 500 ships in her Navy, and to match that number would have been impossible. So Congress authorized the construction of just six shipsÂˇ: Frigate &quot;D,&quot; later named Constitution with Hercules as her figurehead, was to be constructed in Boston, the United States at Philadelphia, the Constellation at Baltimore, and the Chesapeake at Norfolk. While the authorization for six frigates was the most ambitious shipbuilding project as yet undertaken in North America, we also wanted to emphasize the technological ingenuity that went into building Constitution. A complex problem confronted the designer, Joshua Humphreys: how to build the most advanced warships in the world? If successfully resolved, his solution would provide the young nation with a distinct competitive advantage, even with a Navy of only six ships. To build anything exceptional, whether battleship or cathedral, requires foresight, keen analysis of the problem and superb technological skills. These frigates had to be different from anything else their size-faster, stronger, better armed and more maneuverable. To compete on the high seas, America had to become simply the best shipbuilding country in the world. Constitution turned out to be all that Humphreys had hoped for-she ran when outmatched, slugged it out when the odds were acceptable, wiggled out of jams, was never holed, never dismasted and never defeated. The &quot;Building of Old Ironsides&quot; Exhibit shows how the blending of fresh ideas with innovative materials made Constitution the technological marvel of her time. Life at Sea But one can develop the most sophisticated piece of equipment and marry it with an elaborate strategy and still have very little. If 20th century military hardware has demonstrated anything, it has shown that unless the machinery is operated by people who are well-trained and resourceful, sophisticated technology can become &quot;spare parts&quot; very quickly. The 475 men and boys who lived and worked aboard Constitution made for a good sized village in the 19th century, but one that the anthropologists and social historians have largely ignored. The &quot;Life at Sea&quot; exhibit was developed to show everyday life on Constitution for a 10-year-old boy, a midshipman, a marine, an able-bodied seaman and the surgeon&#39;s mate.