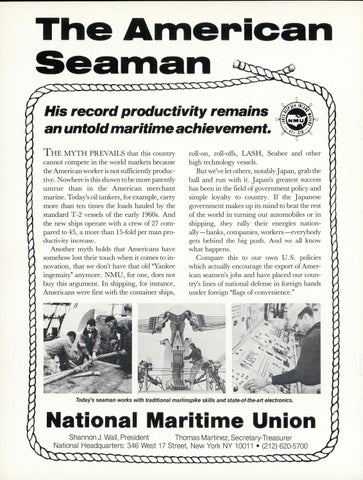 The A111erican Sea111an His record productivity remains an untold maritime achievement. THE MYTH PREVAILS that this country cannot compete in the world markets because the American worker is not sufficiently productive. Nowhere is this shown to be more patently untrue than in the American merchant marine. Today&#39;s oil tankers, for example, carry more than ten times the loads hauled by the standard T-2 vessels of the early 1960s. And the new ships operate with a crew of 27 compared to 45, a more than 15-fold per man productivity increase . Another myth holds that Americans have somehow lost their touch when it comes to innovation, that we don&#39;t have that old &quot;Yankee ingenuity&quot; anymore. NMU, for one, does not buy this argument. In shipping, for instance, Americans were first with the container ships,

roll-on, roll-offs, LASH, Seabee and other high technology vessels. But we&#39;ve let others, notably Japan, grab the ball and run with it. Japan&#39;s greatest success has been in the field of government policy and simple loyalty to country. If the Japanese government makes up its mind to beat the rest of the world in turning out automobiles or in shipping, they rally their energies nationally- banks, companies, workers-everybody gets behind the big push. And we all know what happens . Compare this to our own U.S. policies which actually encourage the export of American seamen&#39;s jobs and have placed our country&#39;s lines of national defense in foreign hands under foreign &quot;flags of convenience.&quot; 11 11 11111 ••