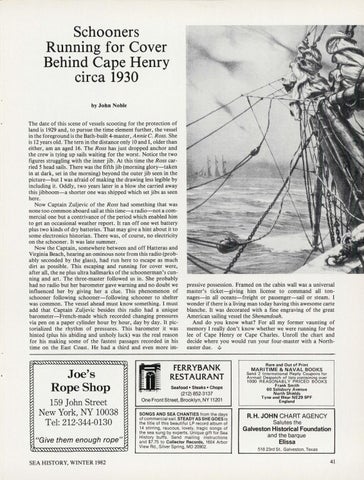 The date of this scene of vessels scooting for the protection of land is 1929 and, to pursue the time element further, the vessel in the foreground is the Bath-built 4-master, Annie C. Ross. She is 12 years old. The tern in the distance only 10 and I, older than either, am an aged 16. The Ross has just dropped anchor and the crew is tying up sails waiting for the worst. Notice the two figures struggling with the inner jib. At this time the Ross carried 5 head sails. There was the fifth jib (morning glory-taken in at dark, set in the morning) beyond the outer jib seen in the picture-but I was afraid of making the drawing less legible by including it. Oddly, two years later in a blow she carried away this jibboom-a shorter one was shipped which set jibs as seen here . Now Captain Zuljevic of the Ross had something that was none too common aboard sail at this time-a radio-not a commercial one but a contrivance of the period which enabled him to get an occasional weather report. It ran off one wet battery plus two kinds of dry batteries. That may give a hint about it to some electronics historian. There was, of course, no electricity on the schooner. It was late summer. Now the Captain, somewhere between and off Hatteras and Virginia Beach, hearing an ominous note from this radio (probably seconded by the glass), had run here to escape as much dirt as possible. This escaping and running for cover were, after all, the ne plus ultra hallmarks of the schoonerman&#39;s cunning and art. The three-master followed us in. She probably had no radio but her barometer gave warning and no doubt we influenced her by giving her a clue. This phenomenon of schooner following schooner-following schooner to shelter was common. The vessel ahead must know something. I must add that Captain Zuljevic besides this radio had a unique barometer-French-made which recorded changing pressures via pen on a paper cylinder hour by hour, day by day. It pictorialized the rhythm of pressures. This barometer it was hinted (plus his abiding and unholy luck) was the real reason for his making some of the fastest passages recorded in his time on the East Coast. He had a third and even more im-

pressive possession. Framed on the cabin wall was a universal master&#39;s ticket-giving him license to command all tonnages-in all oceans-freight or passenger-sail or steam. I wonder if there is a living man today having this awesome carte blanche. It was decorated with a fine engraving of the great American sailing vessel the Shenandoah. And do you know what? For all my former vaunting of memory I really don&#39;t know whether we were running for the lee of Cape Henry or Cape Charles. Unroll the chart and decide where you would run your four-master with a Northeaster due. .ti

SONGS AND SEA CHANTIES from the days of commercial sail. STEADY AS SHE GOES is the title of this beautiful LP record album of 14 stirri ng, raucous, lovely, tragic songs of the sea sung by experts. Unique gift for· Sea History buffs. Send mailing instructions and $7.75 to Collector Records, 1604 Arbor View Rd ., Silver Spring , MD 20902.