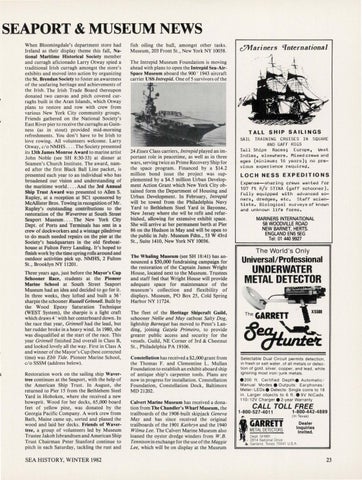 SEAPORT &amp; MUSEUM NEWS When Bloomingdale&#39;s department store had Ireland as their display theme this fall, National Maritime Historical Society member and curragh aficionado Larry Otway spied a traditional Irish curragh amongst the store&#39;s exhibits and moved into action by organizing the St. Brendan Society to foster an awareness of the seafaring heritage and achievements of the Irish . The Irish Trade Board thereupon donated two canvas and pitch covered curraghs built in the Aran Islands, which Otway plans to restore and row with crew from various New York City community groups. Friends gathered on the National Society&#39;s East River pier to receive the curraghs as Guinness (as in stout) provided mid-morning refreshments. You don &#39;t have to be Irish to love rowing. All volunteers welcome. Larry Otway, cl o NMHS . ... The Society presented its 13th James Monroe Award to marine artist John Noble (see SH 8:30-33) at dinner at Seamen&#39;s Church Institute. The award, named after the first Black Ball Line packet, is presented each year to an individual who has broadened our vision and understanding of the maritime world .... And the 3rd Annual Ship Trust Award was presented to Allen S. Rupley, at a reception at SCl sponsored by McAllister Bros. Towing in recognition of Mr. Rupley&#39;s outstanding contributions to the restoration of the Wavertree at South Street Seaport Museum .... The New York City Dept. of Ports and Terminals has sent in a crew of dockworkers and a wintage piledriver to do much needed repairs on the pier at the Society&#39;s headquarters in the old fireboathouse at Fulton Ferry Landing. It&#39;s hoped to finish work by the time spring rolls around and outdoor activities pick up. NMHS, 2 Fulton St. , Brooklyn NY 11201. Three years ago, just before the Mayor&#39;s Cup Schooner Race, students at the Pioneer Marine School at South Street Seaport Museum had an idea and decided to go for it. In three weeks, they lofted and built a 36 ( sharpie the schooner Russell Grinnell. Built by the Wood Epoxy Saturation Technique (WEST System), the sharpie is a light craft which draws 4 &#39; with her centerboard down. In the race that year, Grinnell had the lead, but her rudder broke in a heavy wind. In 1980, she was disqualified at the start of the race. This year Grinnell finished 2nd overall in Class B, and looked lovely all the way. First in Class A and winner of the Mayor&#39;s Cup (best corrected time) was Ebb Tide. Pioneer Marine School, c/ o SSSM (address below) . Restoration work on the sailing ship Wavertree continues at the Seaport, with the help of the American Ship Trust. In August, she returned to Pier 15 from the Bethlehem Steel Yard in Hoboken, where she received a new bowsprit. Wood for her decks, 65,000 board feet of yellow pine, was donated by the Georgia Pacific Company. A work crew from Bath, Maine came up, sorted and planed, the wood and laid her decks. Friends of Wavertree, a group of volunteers led by Museum Trustee Jakob Isbrandtsen and American Ship Trust Chairman Peter Stanford continue to pitch in each Saturday, tackling the rust and

The Intrepid Museum Foundation is moving ahead with plans to open the Intrepid Sea-AirSpace Museum aboard the 900 &#39; 1943 aircraft carrier USS Intrepid. One of 5 survivors of the

24 Essex Class carriers, Intrepid played an important role in peacetime, as well as in three wars, serving twice as Prime Recovery Ship for the space program . Financed by a $14.2 million bond issue the project was supplemented by a $4.5 million Urban Development Action Grant which New York City obtained form the Department of Housing and Urban Development. In February, Intrepid will be towed from the Philadelphia Navy Yard to Bethlehem Steel Yard in Bayonne, New Jersey where she wil be refit and refurbished, allowing for extensive exhibit space. She will arrive at her permanent berth at Pier 86 on the Hudson in May and will be open to the public in July. Museum Fdtn., 53 W 43rd St., Suite 1410, New York NY 10036.

The World&#39;s Only The Whaling Museum (see SH 18:41) has announced a $50,000 fundraising campaign for the restoration of the Captain James Wright House, located next to the Museum. Trustees and staff feel that Wright House will provide adequate space for maintenance of the museum&#39;s collection and flexibility of displays. Museum, PO Box 25, Cold Spring Harbor NY 11724. The fleet of the Heritage Shipcraft Guild, schooner Nellie and May catboat Salty Dog, lightship Barnegat has moved to Penn&#39;s Landing, joining Gaze/a Primeiro, to provide greater public access and security for the vessels. Guild, NE Corner of 3rd &amp; Chestnut St., Philadelphia PA 19106. Constellation has received a $2,000 grant from the Thomas F. and Clementine L. Mullan Foundation to establish an exhibit aboard ship of antique ship&#39;s carpenter tools. Plans are now in progress for installation . Constellation Foundation, Constellation Dock, Baltimore MD 21202. Calvert Marine Museum has received a donation from The Chandler&#39;s Wharf Museum, the trailboards of the 1908-built skipjack Geneva May and has since received the original trailboards of the 1901 Kathryn and the 1940 Wilma Lee. The Calvert Marine Museum also loaned the oyster dredge winders from W.B. Tennison in exchange for the use of theMaggie Lee, which will be on display at the Museum