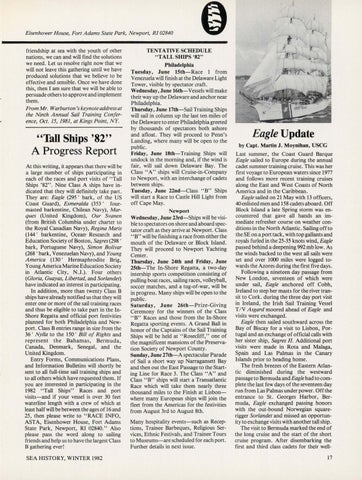 friendship at sea with the youth of other nations, we can and will find the solutions we need. Let us resolve right now that we will not leave this gathering until we have produced solutions that we believe to be effective and sensible. Once we have done this, then I am sure that we will be able to persuade others to approve and implement them. From Mr. Warburton &#39;s keynote address at the Ninth Annual Sail Training Conference, Oct. 15, 1981, at Kings Point, NY.

&quot;Tall Ships &#39;82&quot; A Progress Report At this writing, it appears that there will be a large number of ships participating in each of the races and port visits of &#39;&#39;Tall Ships &#39;82&quot; . Nine Class A ships have indicated that they will definitely take part. They are: Eagle (195 &#39; bark, of the US Coast Guard), Esmeralda (353 &#39; fourmasted barkentine, Chilean Navy), Marques (United Kingdom), Our Svanen (from British Columbia under charter to the Royal Canadian Navy), Regina Maris (144&#39; barkentine, OceanÂˇ Research and Education Society of Boston, Sagres (298 &#39; bark, Portuguese Navy), Simon Bolivar (268 &#39;bark, Venezuelan Navy), and Young America (130&#39; Hermaphrodite Brig, Young America Marine Education Society in Atlantic City, N.J.). Four others (Gloria, Guayas, Libertad, and Sorlandet) have indicated an interest in participating. In addition, more than twenty Class B ships have already notified us that they will enter one or more of the sail training races and thus be eligible to take part in the InShore Regatta and official port festivities planned for both Philadelphia and Newport. Class B entries range in size from the 36&#39; Ny/la to the 150&#39; Bill of Rights and represent the Bahamas, Bermuda, Canada, Denmark, Senegal, and the United Kingdom. Entry Forms, Communications Plans, and Information Bulletins will shortly be sent to all full-time sail training ships and to all others which have requested them. If you are interested in participating in the 1982 &quot;Tall Ships&quot; Races and port visits-and if your vessel is over 30 feet waterline length with a crew of which at least half will be between the ages of 16 and 25, then please write to &quot;RACE INFO, AST A, Eisenhower House, Fort Adams State Park, Newport, RI 02840.&quot; Also please pass the word along to sailing friends and help us to have the largest Class B gathering ever! SEA HISTORY, WINTER 1982

TENTATIVE SCHEDULE &quot;TALL SHIPS &#39;82&quot; Philadelphia Tuesday, June 15th-Race 1 from Venezuela will finish at the Dela ware Light Tower, visible by spectator craft. Wednesday, June 16th-Vessels will make their way up the Delaware and anchor near Philadelphia. Thursday, June 17th-Sail Training Ships will sail in column up the last ten miles of the Delaware to enter Philadelphia greeted by thousands of spectators both ashore and afloat. They will proceed to Penn&#39;s Landing, where many will be open to the public. Friday, June 18th-Training Ships will undock in the morning and, if the wind is fair, will sail down Delaware Bay. The Class &quot;A&quot; ships will Cruise-in-Company to Newport, with an interchange of cadets between ships. Tuesday, June 22nd-Class &quot;B&quot; Ships will start a Race to Castle Hill Light from off Cape May. Newport Wednesday, June 23rd-Ships will be visible to spectators on shore and aboard spectator craft as they arrive at Newport. Class &quot;B&quot; will be finishing a race from either the mouth of the Delaware or Block Island. They will proceed to Newport Yachting Center. Thursday, June 24th and Friday, June 25th-The In-Shore Regatta, a two-day intership sports competition consisting of pulling boat races, sailing races, volleyball, soccer matches, and a tug-of-war, will be in progress. Many ships will be open to the public. Saturday, June 26th-Prize-Giving Ceremony for the winners of the Class &quot;B&quot; Races and those from the In-Shore Regatta sporting events. A Grand Ball in honor of the Captains of the Sail Training Ships will be held at &quot;Rosecliff,&quot; one of the magnificent mansions of the Preservation Society of Newport County. Sunday, June 27th-A spectacular Parade of Sail a short way up Narragansett Bay and then out the East Passage to the Starting Line for Race 3. The Class &quot;A&quot; and Class &quot;B&quot; ships will start a Transatlantic Race which will take them nearly three thousand miles to the Finish at Lisbonwhere many European ships will join the fleet from the Americas for the festivities from August 3rd to August 8th. Many hospitality events-such as Receptions, Trainee Barbeques, Religious Services, Ethnic Festivals, and Trainee Tours to Museums-are scheduled for each port. Further details in next issue.

Eagle Update by Capt. Martin J. Moynihan, USCG Last summer, the Coast Guard Barque Eagle sailed to Europe during the annual cadet summer training cruise. This was her first voyage to European waters since 1977 and follows more recent training cruises along the East and West Coasts of North America and in the Caribbean. Eagle sailed on 21 May with 13 officers, 40enlisted men and 158 cadets aboard. Off Block Island a late Spring storm was encountered that gave all hands an immediate refresher course on weather conditions in the North Atlantic. Sailing off to the SE on a port tack, with top gallants and royals furled in the 25-35 knots wind, Eagle passed behind a deepening 992 mb low. As the winds backed to the west all sails were set and over 1000 miles were logged towards the Azores during the first five days. Following a nineteen day passage from New London, seventeen of which were under sail, Eagle anchored off Cobh, Ireland to step her masts for the river transit to Cork. during the three day port visit in Ireland, the Irish Sail Training Vessel T / V Asgard moored ahead of Eagle and visits were exchanged. Eagle then sailed southward across the Bay of Biscay for a visit to Lisbon, Portugal and an exchange of official calls with her sister ship, Sagres II. Additional port visits were made in Rota and Malaga, Spain and Las Palmas in the Canary Islands prior to heading home. The fresh breezes of the Eastern Atlantic diminished during the westward passage to Bermuda and Eagle had to complete the last few days of the seventeen day run from Las Palmas under power. Off the entrance to St. Georges Harbor, Bermuda, Eagle exchanged passing honors with the out-bound Norwegian squarerigger Sorlandet and missed an opportunity to exchange visits with another tall ship. The visit to Bermuda marked the end of the long cruise and the start of the short cruise program. After disembarking the first and third class cadets for their well17