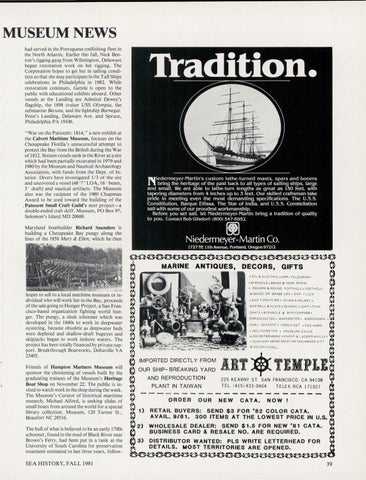 MUSEUM NEWS had served in the Portuguese cod fishing fleet in the North Atlantic. Earlier this fall, Nick Benton' s rigging gang from Wilmington, Delaware began restoration work on her rigging. The Corporation hopes to get her in sailing condition so that she may participate in the Tall Ships celebrations in Philadelphia in 1982. While restoration continues, Gaze/a is open to the public with educational exhibits aboard. Other vessels at the Landing are Admiral Dewey's flagship, the 1898 cruiser USS Oly mpia, the submarine Becuna, and the lightship Barnegat. Penn's Landing, Delaware Ave. and Spruce, Philadelphia PA 19106. "War on the Patuxent: 1814," a new exhibit at the Calvert Maritime Museum, focuses on the Chesapeake Flotilla's unsuccessful attempt to protect the Bay from the British during the War of 1812. Sixteen vessels sank in the River at a site which had been partially excavated in 1979 and 1980 by the Museum and Nautical Archaeology Association , with funds from the Dept. of Interior. Divers have investigated 1/3 of the site and uncovered a vessel (48 '7 " LOA, 16 ' beam, 3 ' draft) and nautical artifacts. The Museum also was the recipient of the 1980 Chapman Award to be used toward the building of the .Patuxent Small Craft Guild's next project-a double-ended crab skiff. Museum, PO Box 97, Solomon's Island MD 20688. Maryland boatbuilder Richard Saunders is building a Chesapeake Bay pungy along the lines of the 1858 Mary & Ellen, which he then

Friends of Hampton Mariners Museum will sponsor the christening of vessels built by the graduating trainees of the Museum's Heritage Boat Shop on November 22. The public is invited to watch work in the shop during the week. The Museum 's Curator of historical maritime research, Michael Alford, is seeking slides of small boats from around the world for a special library collection . Museum, 120 Turner St., Beaufort NC 28516. The hull of what is believed to be an early 1700s schooner, found in the mud of Black River near Brown's Ferry, had been put in a tank at -the University of South Carolina for preservation treatment estimated to last three years , follow -

hopes to sell to a local maritime museum or individual who will work her in the Bay, proceeds of the sale going to Hunger Project, a San Francisco-based organization fighting world hunger. The pungy, a sleek schooner which was developed in the 1840s to work in deepwater oystering, became obsolete as deepwater beds were depleted and shallow-draft bugeyes and skipjacks began to work inshore waters. The project has been totally financed by private support. Breakthrough Boat works, Delta ville VA 23403.