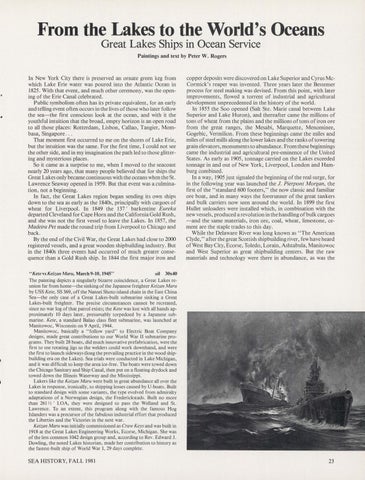 From the Lakes to the World's Oceans Great Lakes Ships in Ocean Service Paintings and text by Peter W. Rogers

In New York City there is preserved an ornate green keg from which Lake Erie water was poured into the Atlantic Ocean in 1825. With that event, and much other ceremony, was the opening of the Erie Canal celebrated. Public symbolism often has its private equivalent, for an early and telling event often occurs in the lives of those who later follow the sea-the first conscious look at the ocean, and with it the youthful intuition that the broad, empty horizon is an open road to all those places: Rotterdam, Lisbon, Callao, Tangier, Mombasa, Singapore .. . That moment first occurred to me on the shores of Lake Erie, but the intuition was the same . For the first time, I could not see the other side, and in my imagination the path led to those glittering and mysterious places. So it came as a surprise to me, when I moved to the seacoast nearly 20 years ago, that many people believed that for ships the Great Lakes only became continuous with the oceans when the St. Lawrence Seaway opened in 1959. But that event was a culmination, not a beginning. In fact, the Great Lakes region began sending its own ships down to the sea as early as the 1840s, principally with cargoes of wheat for Liverpool. In 1849 the 137' barkentine Eureka departed Cleveland for Cape Horn and the California Gold Rush, and she was not the first vessel to leave the Lakes. In 1857, the Madeira Pet made the round trip from Liverpool to Chicago and back . By the end of the Civil War, the Great Lakes had close to 2000 registered vessels, and a great wooden shipbuilding industry. But in the 1840s three events had occurred of much greater consequence than a Gold Rush ship. In 1844 the first major iron and

copper deposits were discovered on Lake Superior and Cyrus McCormick's reaper was invented. Three years later the Bessemer process for steel making was devised . From this point, with later improvements, flowed a torrent of industrial and agricultural development unprecedented in the history of the world. In 1855 the Sao opened (Salt Ste. Marie canal between Lake Superior and Lake Huron), and thereafter came the millions of tons of wheat from the plains and the millions of tons of iron ore from the great ranges, the Mesabi, Marquette, Menominee, Gogebic, Vermilion. From these beginnings came the miles and miles of steel mills along the lower lakes and the ranks of towering grain elevators, monuments to abundance. From these beginnings came the industrial and agricultural pre-eminence of the United States. As early as 1905, tonnage carried on the Lakes exceeded tonnage in and out of New York, Liverpool, London and Hamburg combined. In a way, 1905 just signaled the beginning of the real surge, for in the following year was launched the J. Pierpont Morgan, the first of the "standard 600 footers," the now classic and familiar ore boat, and in many ways the forerunner of the great tankers and bulk carriers now seen around the world. In 1899 the first Hullet unloaders were installed which, in combination with the new vessels, produced a revolution in the handling of bulk cargoes -and the same materials, iron ore, coal, wheat, limesto ne, cement are the staple trades to this day. While the Delaware River was long known as "The American Clyde,'' after the great Scottish shipbuilding river, few have heard of West Bay City, Ecorse, Toledo, Lorain, Ashtabula, Manitowoc and West Superior as great shipbuilding centers. But the raw materials and technology were there in abundance, as was the

"Kete vs Keizan Maru, March 9-10, 1945" oil 30x40 The painting depicts a singularly bizarre coincidence, a Great Lakes reunion far from home-the sinking of the Japanese freighter Keizan Maru by USS Kete, SS 369, off the Nansei Shoto island chain in the East China Sea-the only case of a Great Lakes-built submarine sinking a Great Lakes-built freighter. The precise circumstances cannot be recreated, since no war log of that patrol exists; the Kete was lost with all hands approximately I 0 days later, presumably torpedoed by a Japanese submarine. Kete, a standard Balao class fleet submarine, was launched at Manitowoc, Wisconsin on 9 April, 1944. Manitowoc, basically a "follow yard" to Electric Boat Company designs, made great contributions to our World War II submarine programs. They built 28 boats, did much innovative prefabrication, were the first to use rotating jigs so the welders could work downhand, and were the first to launch sideways (long the prevailing practice in the wood shipbuilding era on the Lakes). Sea trials were conducted in Lake Michigan, and it was difficult to keep the area ice-free. The boats were towed down the Chicago Sanitary and Ship Canal, then put on a floating drydock and towed down the Illinois Waterway and the Mississippi. Lakers like the Keizan Maru were built in great abundance all over the Lakes in response, ironically, to shipping losses caused by U-boats. Built to standard design with some variants, the type evolved from admiralty adaptations of a Norwegian design, the Frederickstads. Built no more than 261 Y2' LOA, they were designed to pass the Welland and St. Lawrence. To an extent, this program along with the famous Hog Islanders was a precursor of the fabulous industrial effon that produced the Liberties and the Victories in the next war. Keizan Maru was initially commissioned as Craw Keys and was built in 1918 at the Great Lakes Engineering Works, Ecorse, Michigan. She was of the less common 1042 design group and, according to Rev. Edward J. Dowling, the noted Lakes historian, made her contribution to history as the fastest-built ship of World War I, 29 days complete.