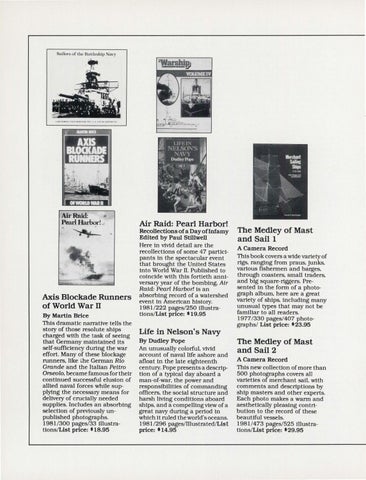 Sailors of the Ballleship Navy

Axis Blockade Runners of World War II By Martin Brice This dramatic narrative tells the story of those resolute ships charged with the task of seeing that Germany maintained its self-sufficiency during the war effort. Many of these blockage runners, like I.he German Rio Grande and the Italian Peitro Orseolo, became famous fortheir continued successful elusion of allied naval forces while supplying the necessary means for delivery of crucially needed supplies. Includes an absorbing selection of previously unpublished photographs. 1981 /300 pages/33 illustrations/List price: $18.95

Air Raid: Pearl Harbor! Recollections of a Day oflnfamy Edited by Paul Stillwell Here in vivid detail are the recollections of some 4 7 participants in the spectacular event that brought the United States into World War II. Published to coincide with this fortieth anniversary year of the bombing, Air Raid: Pearl Harbor! is an absorbing record of a watershed event in American history. 1981 /222 pages/250 illustrations/ List price: $19.95

The Medley of Mast and Sail 1 A Camera Record This book covers a wide variety of rigs. ranging from praus, junks, various fishermen and barges, through coasters. small traders, and big square-riggers. Presented in the form of a photograph album, here are a great variety of ships, including many unusual types that may not be familiar to all readers. 1977/330 pages/407 photographs/ List price: $23.95

account of naval life ashore and afloat in the late eighteenth century. Pope presents a description of a typical day aboard a man-of-war, the power and responsibilities of commanding officers, the social structure and harsh living conditions aboard ships, and a compelling view of a great navy during a period in which it ruled the world's oceans. 1981/296 pages/Illustrated/List price: $14.95

The Medley of Mast and Sail 2 A Camera Record This new collection of more than 500 photographs covers all varieties of merchant sail, with comments and descriptions by ship masters and other experts. Each photo makes a warm and aesthetically pleasing contribution to the record of these beautiful vessels. 1981/473 pages/525 illustrations/List price: $29.95