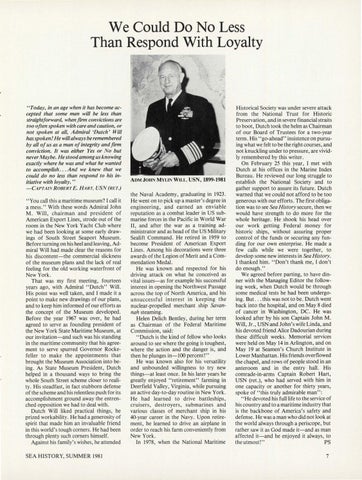 We Could Do No Less Than Respond With Loyalty

"Today, in an age when it has become accepted that some men will be less than straight/orward, when firm convictions are too often spoken with care and caution, or not spoken at all, Admiral 'Dutch ' Will has spoken! He will always be remembered by all of us as a man of integrity and firm conviction. It was either Yes or No but never Maybe. He stood among us knowing exactly where he was and what he wanted to accomplish .. . And we knew that we could do no less than respond to his initiative with loyalty. " -CAPTAIN ROBERT E. HART, USN (RET.) "You call this a maritime museum? I call it a mess." With these words Admiral John M. Will, chairman and president of American Export Lines, strode out of the room in the New York Yacht Club where we had been looking at some early drawings of South Street Seaport Museum . Before turning on his heel and leaving, Admiral Will had made clear the reasons for his discontent-the commercial slickness of the museum plans and the lack of real feeling for the old working waterfront of New York . That was my first meeting, fourteen years ago, with Admiral "Dutch" Will. His point was well taken, and I made it a point to make new drawings of our plans, and to keep him informed of our efforts as the concept of the Museum developed. Before the year 1967 was over, he had agreed to serve as founding president of the New York State Maritime Museum, at our invitation-and such was his standing in the maritime community that his agreement to serve spurred Governor Rockefeller to make the appointments that brought the Museum Association into being . As State Museum President, Dutch helped in a thousand ways to bring the whole South Street scheme closer to reality. His steadfast, in fact stubborn defense of the scheme and his relentless push for its accomplishment ground away the entrenched opposition we had to deal with. Dutch Will liked practical things, he prized workability. He had a generosity of spirit that made him an invaluable friend in this world' s tough corners. He had been through plenty such corners himself. Against his family's wishes, he attended SEA HISTORY, SUMMER 1981

the Naval Academy, graduating in 1923 . He went on to pick up a master's degree in engineering, and earned an enviable reputation as a combat leader in US submarine forces in the Pacific in World War II, and after the war as a training administrator and as head of the US Military Sealift Command. He retired in 1959 to become President of American Export Lines. Among his decorations were three awards of the Legion of Merit and a Commendation Medal. He was known and respected for his driving attack on what he conceived as vital issues-as for example his successful interest in opening the Northwest Passage across the top of North America, and his unsuccessful interest in keeping the nuclear-propelled merchant ship Savannah steaming. Helen Delich Bentley, during her term as Chairman of the Federal Maritime Commission, said : "Dutch is the kind of fellow who looks around to see where the going is toughest, where the action and the danger is , and then he plunges in-JOO percent!" He was known also for his versatility and unbounded willingness to try new things-at least once. In his later years he greatly enjoyed "retirement" farming in Deerfield Valley, Virginia, while pursuing an active day-to-day routine in New York . He had learned to drive battleships, cruisers, destroyers, submarines and various classes of merchant ship in his 4D-year career in the Navy. Upon retirement, he learned to drive an airplane in order to reach his farm conveniently from New York. In 1978, when the National Maritime

Historical Society was under severe attack from the National Trust for Historic Preservation, and in severe financial straits to boot, Dutch took the helm as Chairman of our Board of Trustees for a two-year term . His " go-ahead" insistence on pursuing what we felt to be the right courses, and not knuckling under to pressure, are vividly remembered by this writer. On February 25 this year, I met with Dutch at his offices in the Marine Index Bureau. He reviewed our long struggle to establish the National Society and to gather support to assure its future. Dutch warned that we could not afford to be too generous with our efforts. The first obligation was to see Sea History secure, then we would have strength to do more for the whole heritage. He shook his head over our work getting Federal money for historic ships, without assuring proper control of the funds or securing any funding for our own enterprise. He made a few calls while we were together, to develop some new interests in Sea History . I thanked him. "Don't thank me, I don't do enough ." We agreed before parting, to have dinner with the Managing Editor the following week, when Dutch would be through some medical tests he had been undergoing. But .. . this was not to be. Dutch went back into the hospital, and on May 8 died of cancer in Washington, DC. He was looked after by his son Captain John M. Will, Jr., USN and John's wife Linda, and his devoted friend Alice Dadourian during these difficult weeks . Memorial services were held on May 14 in Arlington, and on May 19 at Seamen's Church Institute in Lower Manhattan . His friends overflowed the chapel, and rows of people stood in an anteroom and in the entry hall. His comrade-in-arms Captain Robert Hart, USN (ret.), who had served with him in one capacity or another for thirty years, spoke of "this truly admirable man": "He devoted his full life to the service of his country and to a maritime industry that is the backbone of America's safety and defense . He was a man who did not look at the world always through a periscope, but rather saw it as God made it-and as man affected it-and he enjoyed it always, to the utmost!" PS 7