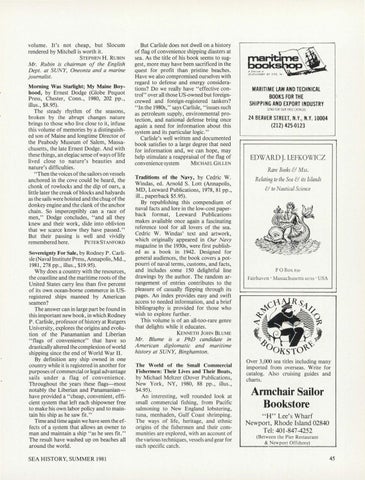 volume. It's not cheap, but Slocum rendered by Mitchell is worth it. STEPHEN H. RUBIN Mr. Rubin is chairman of the English Dept. at SUNY, Oneonta and a marine journalist. Morning Was Starlight; My Maine Boyhood, by Ernest Dodge (Globe Pequot Press, Chester, Conn., 1980, 202 pp., illus., $8.95). The steady rhythm of the seasons, broken by the abrupt changes nature brings to those who live close to it, infuse this volume of memories by a distinguished son of Maine and longtime Director of the Peabody Museum of Salem, Massachusetts, the late Ernest Dodge. And with these things, an elegiac sense of ways of life lived close to nature's beauties and nature's difficulties. ''Then the voices of the sailors on vessels anchored in the cove could be heard, the chonk of rowlocks and the dip of oars, a little later the creak of blocks and halyards as the sails were hoisted and the chug of the donkey engine and the clank of the anchor chain. So imperceptibly can a race of men," Dodge concludes, "and all they knew and their work, slide into oblivion that we scarce know they have passed." But their passing is well and vividly PETER STANFORD remembered here. Sovereignty For Sale, by Rodney P. Carlisle (Naval Institute Press, Annapolis, Md., 1981, 278 pp., illus., $19.95). Why does a country with the resources, the coastline and the maritime roots of the United States carry less than five percent of its own ocean-borne commerce in USregistered ships manned by American seamen? The answer can in large part be found in this important new book, in which Rodney P. Carlisle, professor of history at Rutgers University, explores the origins and evolution of the Panamanian and Liberian "flags of convenience" that have so drastically altered the complexion of world shipping since the end of World War II. By definition any ship owned in one country while it is registered in another for purposes of commercial or legal advantage sails under a flag of convenience. Throughout the years these flags-most notably the Liberian and Panamanianhave provided a "cheap, convenient, efficient system that left each shipowner free to make his own labor policy and to maintain his ship as he saw fit." Time and time again we have seen the effects of a system that allows an owner to man and maintain a ship "as he sees fit." The result have washed up on beaches all around the world. SEA HISTORY, SUMMER 1981

But Carlisle does not dwell on a history of flag of convenience shipping diasters at sea. As the title of his book seems to suggest, more may have been sacrificed in the quest for profit than pristine beaches. Have we also compromised ourselves with regard to defense and energy considerations? Do we really have "effective control" over all those US-owned but foreigncrewed and foreign-registered tankers? "In the 1980s," says Carlisle, "issues such as petroleum supply, environmental protection, and national defense bring once again a need for information about this system and its particular logic.'' Carlisle's well written and documented book satisfies to a large degree that need for information and, we can hope, may help stimulate a reappraisal of the flag of convenience system MICHAEL GILLEN

Traditions of the Navy, by Cedric W. Windas, ed. Arnold S. Lott (Annapolis, MD, Leeward Publications, 1978, 81 pp., ill., paperback $5.95). By republishing this compendium of naval facts and lore in the low-cost paperback format, Leeward Publications makes available once again a fascinating reference tool for all lovers of the sea. Cedric W. Windas' text and artwork, which originally appeared in Our Navy magazine in the 1930s, were first published as a book in 1942. Designed for general audiences, the book covers a potpourri of naval terms, customs, and facts, and includes some 150 delightful line drawings by the author. The random arrangement of entries contributes to the pleasure of casually flipping through its pages. An index provides easy and swift access to needed information, and a brief bibliography is provided for those who wish to explore further. This volume is of an all-too-rare genre that delights while it educates. KENNETH JOHN BLUME Mr. Blume is a PhD candidate in American diplomatic and maritime history at SUNY, Binghamton. The World of the Small Commercial Fishermen: Their Lives and Their Boats, by Michael Meltzer (Dover Publications, New York, NY, 1980, 88 pp., illus., $4.95). An interesting, well rounded look at small commercial fishing, from Pacific salmoning to New England lobstering, tuna, menhaden, Gulf Coast shrimping. The ways of life, heritage, and ethnic origins of the fishermen and their communities are explored, with an account of the various techniques, vessels and gear for each speci fie catch.

Relating to the Sea & its Islands & to Nautical Science

Over 3,000 sea titles including many imported from overseas. Write for catalog. Also cruising guides and charts.