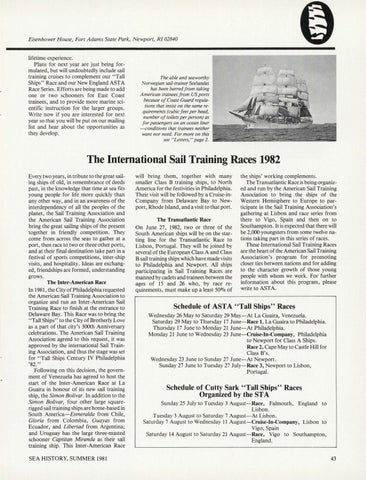 lifetime experience. Plans for next year are just being formulated, but will undoubtedly include sail training cruises to complement our "Tall Ships" Race and our New England AST A Race Series. Efforts are being made to add one or two schooners for East Coast trainees, and to provide more marine scientific instruction for the larger groups. Write now if you are interested for next year so that you will be put on our mailing list and hear about the opportunities as they develop.

The able and seaworthy Norwegian sail-trainer Sorlandet has been barred from taking American trainees from US ports because of Coast Guard regulations that insist on the same requirements (cubic feet per head, number of toilets per person) as for passengers on an ocean liner -conditions that trainees neither want nor need. For more on this see "Letters," page 2.

The International Sail Training Races 1982 Every two years, in tribute to the great sailing ships of old, in remembrance of deeds past, in the knowledge that time at sea fits young people for life more quickly than any other way, and in an awareness of the interdependency of all the peoples of the planet, the Sail Training Association and the American Sail Training Association bring the great sailing ships of the present together in friendly competition. They come from across the seas to gather at a port, then race to two or three other ports, and at their final destination take part in a festival of sports competitions, inter-ship visits, and hospitality. Ideas are exchanged, friendships are formed, understanding grows. The Inter-American Race In 1981, the City of Philadelphia requested the American Sail Training Association to organize and run an Inter-American Sail Training Race to finish at the entrance to Delaware Bay. This Race was to bring the ''Tall Ships'' to the City of Brotherly Love as a part of that city's 300th Anniversary celebrations. The American Sail Training Association agreed to this request, it was approved by the international Sail Training Association, and thus the stage was set for "Tall Ships Century IV Philadelphia '82." Following on this decision, the government of Venezuela has agreed to host the start of the Inter-American Race at La Guaira in honour of its new sail training ship, the Simon Bolivar. In addition to the Simon Bolivar, four other large squarerigged sail training ships are home-based in South America-Esmeralda from Chile, Gloria from Colombia, Guayas from Ecuador, and Libertad from Argentina; and Uruguay has the large three-masted schooner Captitan Miranda as their sail training ship. This Inter-American Race SEA HISTORY, SUMMER 1981

will bring them, together with many smaller Class B training ships, to North America for the festivities in Philadelphia. Their visit will be followed by a Cruise-inCompany from Delaware Bay to Newport, Rhode Island, and a visit to that port. The Transatlantic Race On June 27, 1982, two or three of the South American ships will be on the starting line for the Transatlantic Race to Lisbon, Portugal. They will be joined by several of the European Class A and Class B sail training ships which have made visits to Philadelphia and Newport. All ships participating in Sail Training Races are manned by cadets and trainees between the ages of 15 and 26 who, by race requirements, must make up a least 50% of