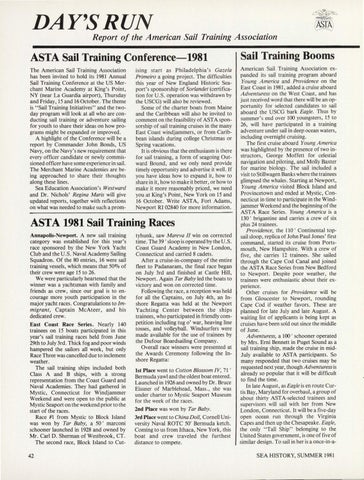 ASTA Sail Training Conference-1981 The American Sail Training Association has been invited to hold its 1981 Annual Sail Training Conference at the US Merchant Marine Academy at King&#39;s Point, NY (near La Guardia airport), Thursday and Friday, 15 and 16 October. The theme is &quot;Sail Training Initiatives&quot; and the twoday program will look at all who are conducting sail training or adventure sailing for youth to share their ideas on how programs might be expanded or improved. A highlight of the Conference will be a report by Commander John Bonds, US Navy, on the Navy&#39;s new requirement that every officer candidate or newly commissioned officer have some experience in sail. The Merchant Marine Academies are being approached to share their thoughts along these lines. Sea Education Association&#39;s Westward and Dr. Nichols&#39; Regina Maris will give updated reports, together with reflections on what was needed to make such a prom-

ising start as Philadelphia&#39;s Gaze/a Primeiro a going project. The difficulties this year of New England Historic Seaport&#39;s sponsorship of Sorlandet (certification for U.S . operation was withdrawn by the USCG) will also be reviewed. Some of the charter boats from Maine and the Caribbean will also be invited to comment on the feasibility of AST A sponsorship of sail training cruises in the many East Coast windjammers, or from Caribbean islands during college Christmas or Spring vacations. It is obvious that the enthusiasm is there for sail training, a form of seagoing Outward Bound, and we only need provide timely opportunity and advertise it well. If you have ideas how to expand it, how to share in it, how to make it better, or how to make it more reasonably priced, we need you at King&#39;s Point, New York on 15 and 16 October. Write ASTA, Fort Adams, Newport RI 02840 for more information.

ASTA 1981 Sail Training Races Annapolis-Newport. A new sail training category was established for this year&#39;s race sponsored by the New York Yacht Club and the U.S. Naval Academy Sailing Squadron. Of the 80 entries, 16 were sail training vessels, which means that 50% of their crew were age 15 to 26. We were particularly heartened that the winner was a yachtsman with family and friends as crew, since our goal is to encourage more youth participation in the major yacht races. Congratulations to Immigrant, Captain McAteer, and his dedicated crew. East Coast Race Series. Nearly 140 trainees on 15 boats participated in this year&#39;s sail training races held from June 29th to July 3rd. Thick fog and poor winds hampered the sailors all week, but only Race Three was cancelled due to inclement weather. The sail training ships included both Class A and B ships, with a strong representation from the Coast Guard and Naval Academies. They had gathered in Mystic, Connecticut for Windjammer Weekend and were open to the public at Mystic Seaport on the weekend prior to the start of the races. Race #1 from Mystic to Block Island was won by Tar Baby, a 50&#39; marconi schooner launched in 1928 and owned by Mr. Carl D. Sherman of Westbrook, CT. The second race, Block Island to Cut-

tyhunk, saw Mareva II win on corrected time. The 39 &#39;sloop is operated by the U.S. Coast Guard Academy in New London, Connecticut and carried 8 cadets. After a cruise-in-company of the entire fleet to Padanaram, the final race began on July 3rd and finished at Castle Hill, Newport. Again Tar Baby led the boats to victory and won on corrected time. Following the race, a reception was held for all the Captains, on July 4th, an Inshore Regatta was held at the Newport Yachting Center between the ships trainees, who participated in friendly competition including tug o&#39; war, heaving line tosses, and volleyball. Windsurfers were made available for the use of trainees by the Dufour Boardsailing Company. Overall race winners were presented at the Awards Ceremony following the Inshore Regatta: 1st Place went to Cotton Blossom JV, 71 &#39; Bermuda yawl and the oldest boat entered. Launched in 1926 and owned by Dr. Bruce Eissner of Marblehead, Mass., she was under charter to Mystic Seaport Museum for the week of the races. 2nd Place was won by Tar Baby. 3rd Place went to China Doll, Cornell University Naval ROTC 50&#39; Bermuda ketch . Coming to us from Ithaca, New York, this boat and crew traveled the furthest distance to compete.

Sail Training Booms American Sail Training Association expanded its sail training program aboard Young America and Providence on the East Coast in 1981, added a cruise aboard Adventuress on the West Coast, and has just received word that there will be an opportunity for selected candidates to sail aboard the USCG bark Eagle. Thus by summer&#39;s end over 100 youngsters, 15 to 26, will have participated in a training adventure under sail in deep ocean waters, including overnight cruising. The first cruise aboard Young America was highlighted by the presence of two instructors, George Moffett for celestial navigation and piloting, and Molly Baxter for marine biology. The sail included a visit to Stillwagen Banks where the trainees glimpsed the whales. Starting at Newport, Young America visited Block Island and Provincetown and ended at Mystic, Connecticut in time to participate in the Windjammer Weekend and the beginning of the AST A Race Series. Young America is a 130 &#39; brigantine and carries a crew of six plus 24 trainees. Providence, the 110 &#39; Continental topsail sloop, replica of John Paul Jones&#39; first command, started its cruise from Portsmouth, New Hampshire. With a crew of five, she carries 12 trainees. She sailed through the Cape Cod Canal and joined the ASTA Race Series from New Bedford to Newport. Despite poor weather, the trainees were enthusiastic about their experience. Other cruises for Providence will be from Gloucester to Newport, rounding Cape Cod if weather favors. These are planned for late July and late August. A waiting list of applicants is being kept as cruises have been sold out since the middle of June. Adventuress, a 100 &#39; schooner operated by Mrs. Erni Bennett in Puget Sound as a sail training ship, made the cruise in midJ uly available to ASTA participants. So many responded that two cruises may be requested next year, though Adventuress is already so popular that it will be difficult to find the time. In late August, as Eagle is en route Curtis Bay, Maryland for overhaul, a group of about thirty AST A-selected trainees and supervisors will sail with her from New London, Connecticut. It will be a five-day open ocean run through the Virginia Capes and then up the Chesapeake. Eagle, the only &quot;Tall Ship&quot; belonging to the United States government, is one of five of similar design. To sail in her is a once-in-aSEA HISTORY, SUMMER 1981