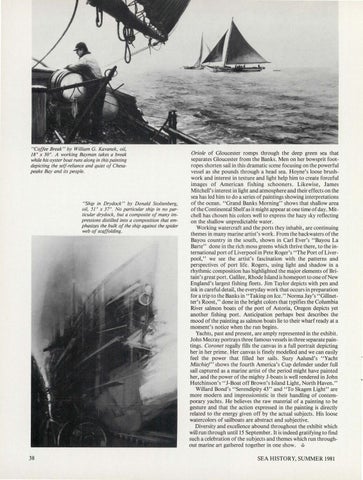 &quot;Coffee Break&quot; by William G. Kavanek, oil, 18&quot; x 30&quot;. A working Bayman takes a break while his oyster boat runs along in this painting depicting the self-reliance and quiet of Chesapeake Bay and its people.

&quot;Ship in Drydock&quot; by Donald Stoltenberg, oil, 51&quot; x 37&quot;. No particular ship in no particular drydock, but a composite of many impressions distilled into a composition that emphasizes the bulk of the ship against the spider web of scaffolding.

Oriole of Gloucester romps through the deep green sea that separates Gloucester from the Banks. Men on her bowsprit footropes shorten sail in this dramatic scene focusing on the powerful vessel as she pounds through a head sea. Hoyne&#39;s loose brushwork and interest in texture and light help him to create forceful images of American fishing schooners. Likewise, James Mitchell&#39;s interest in light and atmosphere and their effects on the sea has led him to do a series of paintings showing interpretations of the ocean. &quot;Grand Banks Morning&quot; shows that shallow area of the Continental Shelf as it might appear at one time of day. Mitchell has chosen his colors well to express the hazy sky reflecting on the shallow unpredictable water. Working watercraft and the ports they inhabit, are continuing themes in many marine artist&#39;s work. From the backwaters of the Bayou country in the south, shown in Carl Ever&#39;s &quot;Bayou La Barte&quot; done in the rich moss greens which thrive there, to the international port of Liverpool in Pete Roger&#39;s &#39;&#39;The Port of Liverpool,&quot; we see the artist&#39;s fascination with the patterns and perspectives of port life. Rogers, using light and shadow in a rhythmic composition has highlighted the major elements of Britain&#39;s great port. Galilee, Rhode Island is homeport to one of New England&#39;s largest fishing fleets. Jim Taylor depicts with pen and ink in careful detail, the everyday work that occurs in preparation for a trip to the Banks in &quot;Taking on Ice.&quot; Norma Jay&#39;s &quot;Gillnetter&#39;s Roost,&quot; done in the bright colors that typifies the Columbia River salmon boats of the port of Astoria, Oregon depicts yet another fishing port. Anticipation perhaps best describes the mood of the painting as salmon boats lie to their wharf ready at a moment&#39;s notice when the run begins. Yachts, past and present, are amply represented in the exhibit. John Mecray portrays three famous vessels in three separate paintings. Coronet regally fills the canvas in a full portrait depicting her in her prime. Her canvas is finely modelled and we can easily feel the power that filled her sails. Suzy Aalund&#39;s &quot;Yacht Mischief&quot; shows the fourth America&#39;s Cup defender under full sail captured as a marine artist of the period might have painted her, and the power of the mighty J-boats is well rendered in John Hutchinson&#39;s &quot;J-Boat off Brown&#39;s Island Light, North Haven.&quot; Willard Bond&#39;s &quot;Serendipity 43&quot; and &quot;To Skagen Light&quot; are more modern and impressionistic in their handling of contemporary yachts. He believes the raw material of a painting to be gesture and that the action expressed in the painting is directly related to the energy given off by the actual subjects. His loose watercolors of sailboats are abstract and subjective. Diversity and excellence abound throughout the exhibit which will run through until 15 September. It is indeed gratifying to find such a celebration of the subjects and themes which run throughout marine art gathered together in one show. .t