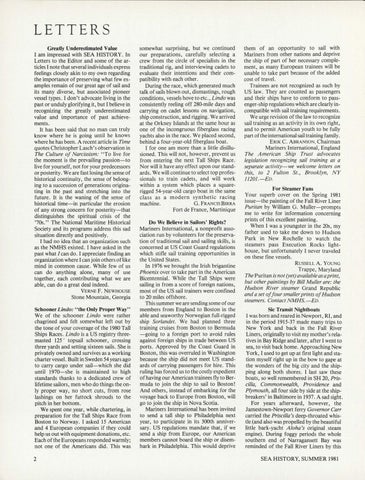 LETTERS Greatly Underestimated Value I am impressed with SEA HISTORY. In Letters to the Editor and some of the articles I note that several individuals express feelings closely akin to my own regarding the importance of preserving what few examples remain of our great age of sail and its many diverse, but associated pioneer vessel types. I don&#39;t advocate living in the past or unduly glorifying it, but I believe in recognizing the greatly underestimated value and importance of past achievements . It has been said that no man can truly know where he is going until he knows where he has been. A recent article in Time quotes Christopher Lasch &#39;s observation in The Culture of Narcissism: &quot;To live for the moment is the prevailing passion-to live for yourself, not for your predecessors or posterity. We are fast losing the sense of historical continuity, the sense of belonging to a succession of generations originating in the past and stretching into the future. It is the waning of the sense of historical time-in particular the erosion of any strong concern for posterity-that distinguishes the spiritual crisis of the &#39;70s.&quot; The National Maritime Historical Society and its programs address this sad situation directly and positively . I had no idea that an organization such as the NMHS existed . I have asked in the past what I can do. I appreciate finding an organization where I can join others oflike mind in common cause . While few of us can do anything alone, many of use together, each contributing what we are able, can do a great deal indeed . VERNE F. NEWHOUSE Stone Mountain, Georgia Schooner Lindo: &quot;the Only Proper Way&quot; We of the schooner Lindo were rather chagrined and felt somewhat left out by the tone of your coverage of the 1980 Tall Ships Races . Lindo is a US registry threemasted 125&#39; topsail schooner, crossing three yards and setting sixteen sails. She is privately owned and survives as a working charter vessel. Built in Sweden 54 years ago to carry cargo under sail-which she did until 1970-she is maintained to high standards thanks to a dedicated crew of lifetime sailors, men who do things the only proper way, no short cuts, from rose lashings on her futtock shrouds to the pitch in her bottom. We spent one year, while chartering, in preparation for the Tall Ships Race from Boston to Norway. I asked 15 American and 4 European companies if they could help us out with equipment donations, etc. Each of the Europeans responded warmly; not one of the Americans did. This was

somewhat surpnsmg, but we continued our preparations, carefully selecting a crew from the circle of specialists in the traditional rig, and interviewing cadets to evaluate their intentions and their compatibility with each other. During the race, which generated much talk of sails blown out, dismastings, rough conditions , vessels hove to etc ., Lindo was consistently reeling off 280-mile days and carrying on cadet lessons on navigation, ship construction, and rigging. We arrived at the Orkney Islands at the same hour as one of the incongruous fiberglass racing yachts also in the race . We placed second, behind a four-year-old fiberglass boat. I for one am more than a little disillusioned. This will not, however, prevent us from entering the next Tall Ships Race . Nor will it have any effect upon our standards. We will continue to select top professionals to train cadets, and will work within a system which places a squarerigged 54-year-old cargo boat in the same class as a modern synthetic racing machine . G . FRANCISBIRRA Fort de France, Martinique Do We Believe in Sailors&#39; Rights? Mariners International, a nonprofit association run by volunteers for the preservation of traditional sail and sailing skills, is concerned at US Coast Guard regulations which stifle sail training opportunities in the United States. In 1976 we brought the Irish brigantine Phoenix over to take part in the American Bicentennial. While the Tall Ships were sailing in from a score of foreign nations, most of the US sail trainers were confined to 20 miles offshore. This summer we are sending some of our members from England to Boston in the able and seaworthy Norwegian full-rigged ship Sorlandet. We had planned three training cruises from Boston to Bermuda -going to a foreign port to avoid rules against foreign ships in trade between US ports . Approved by the Coast Guard in Boston, this was overruled in Washington because the ship did not meet US standards of carrying passengers for hire. This ruling has forced us to the costly expedient of having our American trainees fly to Bermuda to join the ship to sail to Boston! And others, instead of embarking for the voyage back to Europe from Boston, will go to join the ship in Nova Scotia. Mariners International has been invited to send a tall ship to Philadelphia next year, to participate in its 300th anniversary. US regulations mandate that, if we send a ship from Europe, our American members cannot board the ship or disembark in Philadelphia. This would deprive

them of an opportunity to sail with Mariners from other nations and deprive the ship of part of her necessary complement, as many European trainees will be unable to take part because of the added cost of travel. Trainees are not recognized as such by US law . They are counted as passengers and their ships have to conform to passenger-ship regulations which are clearly incompatible with sail training requirements. We urge revision of the law to recognize sail training as an activity in its own right, and to permit American youth to be fully part of the international sail training family. ERIK c . ABRANSON, Chairman Mariners International, England The American Ship Trust advocates legislation recognizing sail training as a separate activity-we welcome letters on this, to 2 Fulton St., Brooklyn, NY 11201.-ED. For Steamer Fans Your superb cover on the Spring 1981 issue-the painting of the Fall River Liner Puritan by William G. Muller-prompts me to write for information concerning prints of this excellent painting. When I was a youngster in the 20s, my father used to take me down to Hudson Park in New Rochelle to watch the steamers pass Execution Rocks lighthouse, but unfortunately I never traveled on these fine vessels. RUSSELL A. YOUNG Trappe, Maryland The Puritan is not (yet) available as a print, but other paintings by Bill Muller are: the Hudson River steamer Grand Republic and a set offour smaller prints of Hudson steamers. Contact NMHS. -ED. Sic Transit Nightboats I was born and reared in Newport, RI, and in the period 1915-37 made many trips to New York and back in the Fall River Liners, originally to visit my mother&#39;s relatives in Bay Ridge and later, after I went to sea, to visit back home. Approaching New York, I used to get up at first light and station myself right up in the bow to gape at the wonders of the big city and the shipping along both shores . I last saw these boats, so well remembered in SH 20, Priscilla, Commonwealth, Providence and Plymouth, all four side by side at the shipbreakers&#39; in Baltimore in 1937 . A sad sight. For years afterward, however, the Jamestown-Newport ferry Governor Carr carried the Priscilla&#39;s deep-throated whistle (and also was propelled by the beautiful little bark-yacht Aloha&#39;s original steam engine). During foggy periods the whole southern end of Narragansett Bay was reminded of the Fall River Liners by this