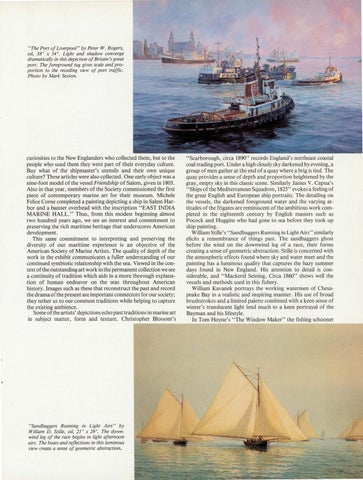 "The Port of Liverpool" by Peter W. Rogers, oil, 38" x 54". Light and shadow converge dramatically in this depiction of Britain's great port. The foreground tug gives scale and proportion to the receding view of port traffic. Photo by Mark Sexton.

curiosities to the New Englanders who collected them, but to the people who used them they were part of their everyday culture. Buy what of the shipmaster's utensils and their own unique culture? These articles were also collected. One early object was a nine-foot model of the vessel Friendship of Salem, given in 1803. Also in that year, members of the Society commissioned the first piece of contemporary marine art for their museum. Michele Felice Come completed a painting depicting a ship in Salem Harbor and a banner overhead with the inscription "EAST INDIA MARINE HALL." Thus, from this modest beginning almost two hundred years ago, we see an interest and commitment to preserving the rich maritime heritage that underscores American development. This same commitment to interpreting and preserving the diversity of our maritime experience is an objective of the American Society of Marine Artists. The quality of depth of the work in the exhibit communicates a fuller understanding of our continued symbiotic relationship with the sea. Viewed in the context of the outstanding art work in the permanent collection we see a continuity of tradition which aids in a more thorough explanation of human endeavor on the seas throughout American history. Images such as these that reconstruct the past and record the drama of the present are important connectors for our society; they tether us to our common traditions while helping to capture the existing ambience. Some of the artists' depictions echo past traditions in marine art in subject matter, form and texture. Christopher Blossom's

"Sandbaggers Running in Light Airs" by William D. Stille, oil, 21" x 29 ". The downwind leg of the race begins in light afternoon airs. The boats and reflections in this luminous view create a sense of geometric abstraction.

"Scarborough, circa 1890" records England's northeast coastal coal trading port. Under a high cloudy sky darkened by evening, a group of men gather at the end of a quay where a brig is tied. The quay provides a sense of depth and proportion heightened by the gray, empty sky in this classic scene. Similarly James V. Capua's "Ships of the Mediterranean Squadron, 1825" evokes a feeling of the great English and European ship portraits. The detailing on the vessels, the darkened foreground water and the varying attitudes of the frigates are reminiscent of the ambitious work completed in the eighteenth century by English masters such as Pocock and Huggins who had gone to sea before they took up ship painting. William Stille's "Sand baggers Running in Light Airs'' similarly elicits a remembrance of things past. The sandbaggers ghost before the wind on the downwind leg of a race, their forms creating a sense of geometric abstraction. Stille is concerned with the atmospheric effects found where sky and water meet and the painting has a luminous quality that captures the hazy summer days found in New England. His attention to detail is considerable, and "Mackerel Seining, Circa 1860" shows well the vessels and methods used in this fishery. William Kavanek portrays the working watermen of Chesapeake Bay in a realistic and inspiring manner. His use of broad brushstrokes and a limited palette combined with a keen sense of winter's translucent light lend much to a keen portrayal of the Bayman and his lifestyle. In Tom Hoyne's "The Window Maker" the fishing schooner