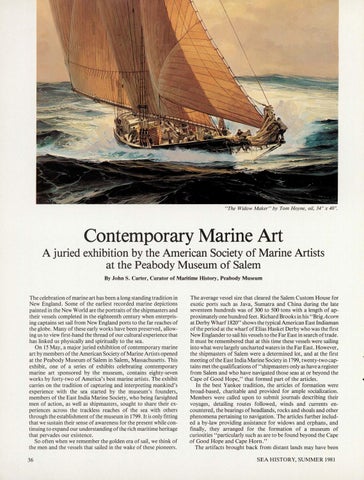 Contemporary Marine Art A juried exhibition by the American Society of Marine Artists at the Peabody Museum of Salem By John S. Carter, Curator of Maritime History, Peabody Museum

The celebration of marine art has been a long standing tradition in New England. Some of the earliest recorded marine depictions painted in the New World are the portraits of the shipmasters and their vessels completed in the eighteenth century when enterprising captains set sail from New England ports to the far reaches of the globe. Many of these early works have been preserved, allowing us to view first-hand the thread of our cultural experience that has linked us physically and spiritually to the sea. On 15 May, a major juried exhibition of contemporary marine art by members of the American Society of Marine Artists opened at the Peabody Museum of Salem in Salem, Massachusetts. This exhibit, one of a series of exhibits celebrating contemporary marine art sponsored by the museum, contains eighty-seven works by forty-two of America's best marine artists. The exhibit carries on the tradition of capturing and interpreting mankind's experience with the sea started by the museum's founders, members of the East India Marine Society, who being farsighted men of action, as well as shipmasters, sought to share their experiences across the trackless reaches of the sea with others through the establishment of the museum in 1799. It is only fitting that we sustain their sense of awareness for the present while continuing to expand our understanding of the rich maritime heritage that pervades our existence. So often when we remember the golden era of sail, we think of the men and the vessels that sailed in the wake of these pioneers . 36

The average vessel size that cleared the Salem Custom House for exotic ports such as Java, Sumatra and China during the late seventeen hundreds was of 300 to 500 tons with a length of approximately one hundred feet. Richard Brooks in his "Brig Acorn at Derby Wharf 1820'' shows the typical American East Indiaman of the period at the wharf of Elias Hasket Derby who was the first New Englander to sail his vessels to the Far East in search of trade. It must be remembered that at this time these vessels were sailing into what were largely uncharted waters in the Far East. However, the shipmasters of Salem were a determined lot, and at the first meeting of the East India Marine Society in 1799, twenty-two captains met the qualifications of' 'shipmasters only as have a register from Salem and who have navigated those seas at or beyond the Cape of Good Hope," that formed part of the articles. In the best Yankee tradition, the articles of formation were broad-based, charitable and provided for ample socialization. Members were called upon to submit journals describing their voyages, detailing routes followed, winds and currents encountered, the bearings of headlands, rocks and shoals and other phenomena pertaining to navigation. The articles further included a by-law providing assistance for widows and orphans, and finally, they arranged for the formation of a museum of curiosities "particularly such as are to be found beyond the Cape of Good Hope and Cape Horn.'' The artifacts brought back from distant lands may have been SEA HISTORY, SUMMER 1981