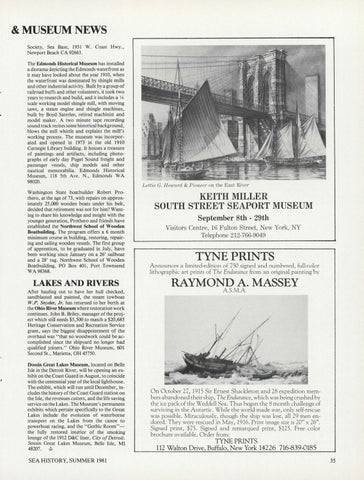 &amp; MUSEUM NEWS Society, Sea Base, 1931 W. Coast Hwy., Newport Beach CA 92663. The Edmonds Historical Museum has installed a diorama depicting the Edmonds waterfront as it may have looked about the year 1910, when the waterfront was dominated by shingle mills and other industrial activity. Built by a group of railroad buffs and other volunteers, it took two years to research and build, and it includes a Y. scale working model shingle mill, with moving saws, a steam engine and shingle machines, built by Boyd Saterlee, retired machinist and model maker. A two minute tape recording sound track recites some historical background, blows the mill whistle and explains the mill&#39;s working process. The museum was incorporated and opened in 1973 in the old 1910 Carnegie Library building. It houses a treasure of paintings and artifacts, including photographs of early day Puget Sound freight and passenger vessels, ship models and other nautical memorabilia. Edmonds Historical Museum, 118 5th Ave. N., Edmonds WA 98020.

Washington State boatbuilder Robert Prothero, at the age of 73, with repairs on approximately 25,000 wooden boats under his belt, decided that retirement was not for him! Wanting to share his knowledge and insight with the younger generation, Prothero and friends have established the Northwest School of Wooden Boatbuilding. The program offers a 6 month minimum course in building, restoring , repairing and sailing wooden vessels. The first group of apprentices, to be graduated in July, have been working since January on a 26&#39; sailboat and a 28&#39; tug. Northwest School of Wooden Boatbuilding, PO Box 401, Port Townsend WA 98368.

Announces a limited -edition of 750 signed and numbered, full -color lithographic art prints of The Endurance from an original painting by

After hauling out to have her hull checked, sandblasted and painted, the steam towboat W.P. Snyder, Jr. has returned to her berth at the Ohio River Museum where restoration work continues. John B. Briley, manager of the project which still needs $5,500 to match a $20,685 Heritage Conservation and Recreation Service grant, says the biggest disappointment of the overhaul was &quot;that no woodwork could be accomplished since the shipyard no longer had qualified joiners.&quot; Ohio River Museum, 601 Second St. , Marietta, OH 45750. Dossin Great Lakes Museum, located on Belle Isle in the Detroit River, will be opening an exhibit on the Coast Guard in August, to coincide with the centennial year of the local lighthouse. The exhibit, which will run until December, includes the history of the Coast Guard station on the Isle, the revenues cutters, and the life saving service on the Lakes. The Museum&#39;s permanent exhibits which pertain specifically to the Great Lakes include the evolution of waterborne transport on the Lakes from the canoe to powerboat racing, and the &quot;Gothic Room&quot;the fully restored interior of the smoking lounge of the 1912 D&amp;C liner, City of Detroit. Sossin Great Lakes Museum, Belle Isle, MI 48207. w

On O ctober 27 , 19 15 Sir Ernest Shackleton and 28 expeditio n members abando ned their ship, The Endurance, which was being crushed by the ice pack of the Weddell Sea. Thus began the 8 mo nth ch allenge of surviving in the Anta rtic. While the wo rld made wa r, only self-rescue was possible. Miraculously, though the shi p was lost, all 29 men en dured . They were rescued in M ay , 1916. Print image size is 20&quot; x 26&quot;. Signed print , $75. Signed and remarqued print, $ 125. Free color brochure available. Order from :