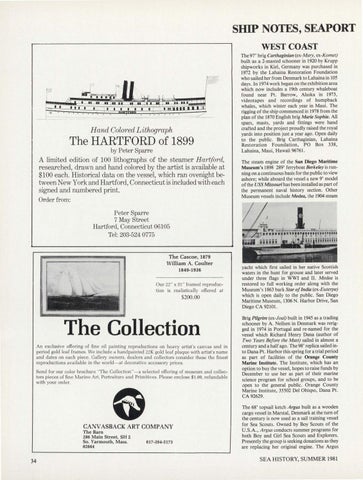 The HARTFORD of 1899 by Pet.er Sparre

A limited edition of 100 lithographs of the steamer Hartford, researched, drawn and hand colored by the artist is available at $100 each. Historical data on the vessel, which ran ovenight between New York and Hartford, Connecticut is included with each signed and numbered print. Order from:

The 97&#39; brig Carthaginian (ex-Mary, ex-Komet) built as a 2-masted schooner in 1920 by Krupp shipworks in Kiel, Germany was purchased in 1972 by the Lahaina Restoration Foundation who sailed her from Denmark to Lahaina in 105 days. In 1974 work began on the exhibition area which now includes a 19th century whaleboat found near Pt. Barrow, Alaska in 1973, videotapes and recordings of humpback whales, which winter each year in Maui. The rigging of the ship commenced in 1978 from the plan of the 1870 English brig Marie Sophie. All spars, masts, yards and fittings were hand crafted and the project proudly raised the royal yards into position just a year ago. Open daily to the public. Brig Carthaginian, Lahaina Restoration Foundation, PO Box 338, Lahaina, Maui, Hawaii 96761. The steam engine of the San Diego Maritime Museum&#39;s 1898 289&#39; ferryboat Berkeley is running on a continuous basis for the public to view ashore; while aboard the vessel a new 9&#39; model of the USS Missouri has been installed as part of the permanent naval history section. Other Museum vessels include Medea, the 1904 steam

Our 22&quot; x 31 &quot; framed reproduction is realistically offered at

yacht which first sailed in her native Scottish waters in the hunt for grouse and later served under three flags in WWI and II. Medea is restored to full working order along with the Museum&#39;s 1863 bark Star of India (ex-Euterpe) which is open daily to the public. San Diego Maritime Museum, 1306 N. Harbor Drive, San Diego CA 92101. Brig Pilgrim (ex-foal) built in 1945 as a trading schooner by A. Neilsen in Denmark was rerigged in 1974 in Portugal and re-named for the vessel which Richard Henry Dana (author of Two Years Before the Mast) sailed in almost a century and a half ago. The 98&#39; replica sailed into Dana Pt. Harbor this spring for a trial period as part of facilities of the Orange County Marine Institute. The Institute, which has an option to buy the vessel, hopes to raise funds by December to use her as part of their marine science program for school groups, and to be open to the general public. Orange County Marine Institute, 35502 Del Obispo, Dana Pt. CA 92629. The 68&#39; topsail ketch Argus built as a wooden cargo vessel in Marstal, Denmark at the turn of the century is now used as a sail training vessel for Sea Scouts. Owned by Boy Scouts of the U.S.A., Argus conducts summer programs for both Boy and Girl Sea Scouts and Explorers. Presently the group is seeking donations as they are replacing her original engine. The Argus