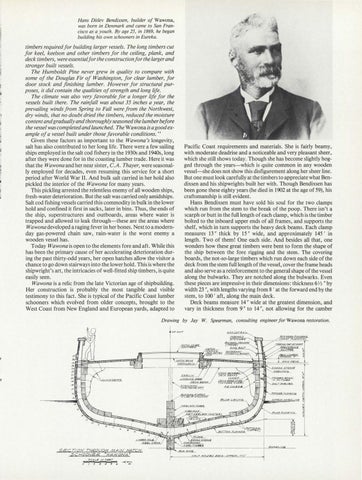 Hans Ditlev Bendixsen, builder of Wawona, was born in Denmark and came to San Francisco as a youth. By age 25, in 1869, he began building his own schooners in Eureka.

timbers required for building larger vessels. The long timbers cut for keel, keelson and other timbers for the ceiling, plank, and deck timbers, were essentialfor the construction for the larger and stronger built vessels. The Humboldt Pine never grew in quality to compare with some of the Douglas Fir of Washington, for clear lumber, for door stock and finishing lumber. However for structural purposes, it did contain the qualities of strength and long life. The climate was also very favorable for a longer life for the vessels built there. The rainfall was about 35 inches a year, the prevailing winds from Spring to Fall were from the Northwest, dry winds, that no doubt dried the timbers, reduced the moisture content and gradually and thoroughly seasoned the lumber before the vessel was completed and launched. The Wawona is a good example of a vessel built under those favorable conditions." Given these factors as important to the Wawona's longevity, salt has also contributed to her long life. There were a few sailing ships employed in the salt cod fishery in the 1930s and 1940s, long after they were done for in the coasting lumber trade. Here it was thatthe Wawonaandhernearsister, C.A. Thayer, were seasonally employed for decades, even resuming this service for a short period after World War II. And bulk salt carried in her hold also pickled the interior of the Wawona for many years. This pickling arrested the relentless enemy of all wooden ships, fresh-water deterioration. But the salt was carried only amidships. Salt cod fishing vessels carried this commodity in bulk in the lower hold and confined it first in sacks, later in bins. Thus, the ends of the ship, superstructures and outboards, areas where water is trapped and allowed to leak through-these are the areas where Wawona developed a raging fever in her bones. Next to a modemday gas-powered chain saw, rain-water is the worst enemy a wooden vessel has. Today Wawona is open to the elements fore and aft. While this has been the primary cause of her accelerating deterioration during the past thirty-odd years, her open hatches allow the visitor a chance to go down stairways into the lower hold. This is where the shipwright's art, the intricacies of well-fitted ship timbers, is quite easily seen. Wawona is a relic from the late Victorian age of shipbuilding. Her construction is probably the most tangible and visible testimony to this fact. She is typical of the Pacific Coast lumber schooners which evolved from older concepts, brought to the West Coast from New England and European yards, adapted to

Pacific Coast requirements and materials. She is fairly beamy, with moderate deadrise and a noticeable and very pleasant sheer, which she still shows today. Though she has become slightly hogged through the years-which is quite common in any wooden vessel-she does not show this disfigurement along her sheer line. But one must look carefully at the timbers to appreciate what Bendixsen and his shipwrights built her with. Though Bendixsen has been gone these eighty years (he died in 1902 at the age of 59), his craftsmanship is still evident. Hans Bendixsen must have sold his soul for the two clamps which run from the stem to the break of the poop. There isn't a scarph or butt in the full length of each clamp, which is the timber bolted to the inboard upper ends of all frames, and supports the shelf, which in tum supports the heavy deck beams. Each clamp measures 13 11 thick by 15 11 wide, and approximately 145' in length . Two of them! One each side. And besides all that, one wonders how these great timbers were bent to form the shape of the ship between the fore rigging and the stem. The covering boards, the not-so-large timbers which run down each side of the deck from the stem full length of the vessel, cover the frame heads and also serve as a reinforcement to the general shape of the vessel along the bulwarks. They are notched along the bulwarks. Even these pieces are impressive in their dimensions: thickness 6 Vi 11 by width 23 11 , with lengths varying from 8 'at the forward end by the stem, to 100' aft, along the main deck. Deck beams measure 14 11 wide at the greatest dimension, and vary in thickness from 9 11 to 14 11 , not allowing for the camber