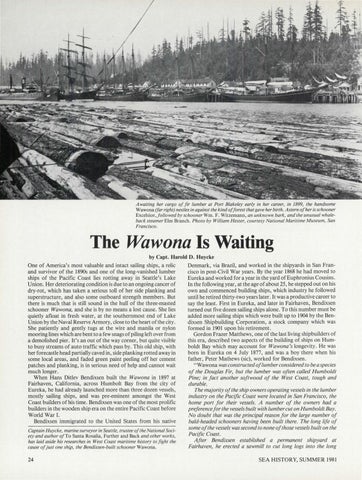 A waiting her cargo of fir lumber at Port Blakeley early in her career, in 1899, the handsome Wawona (far right) nestles in against the kind offorest that gave her birth. Astern of her is schooner Excelsior,followed by schooner Wm . F. Witzemann, an unknown bark, and the unusual whaleback steamer Elm Branch . Photo by William Hester, courtesy National Maritime Museum, San Francisco.

The Wawona Is Waiting by Capt. Harold D. Huycke

One of America's most valuable and intact sailing ships, a relic and survivor of the 1890s and one of the long-vanished lumber ships of the Pacific Coast lies rotting away in Seattle's Lake Union. Her deteriorating condition is due to an ongoing cancer of dry-rot, which has taken a serious toll of her side planking and superstructure, and also some outboard strength members. But there is much that is still sound in the hull of the three-masted schooner Wawona, and she is by no means a lost cause. She lies quietly afloat in fresh water, at the southernmost end of Lake Union by the Naval Reserve Armory, close to the heart of the city. She patiently and gently tugs at the wire and. manila or nylon mooring lines which are bent to a few snags of piling left over from a demolished pier. It's an out of the way corner, but quite visible to busy streams of auto traffic which pass by. This old ship, with her forecastle head partially caved in, side planking rotted away in some local areas, and faded green paint peeling off her cement patches and planking, is in serious need of help and cannot wait much longer. When Hans Ditlev Bendixsen built the Wawona in 1897 at Fairhaven, California, across Humbolt Bay from the city of Eureka, he had already launched more than three dozen vessels, mostly sailing ships, and was pre-eminent amongst the West Coast builders of his time. Bendixsen was one of the most prolific builders in the wooden ship era on the entire Pacific Coast before World War I. Bendixsen immigrated to the United States from his native Captain Huycke, marine surveyor in Seattle, trustee of the National Society and author of To Santa Rosalia, Further and Back and other works, has laid aside his researches in West Coast maritime history to fight the cause of just one ship, the Bendixsen-built schooner Wawona.

Denmark, via Brazil, and worked in the shipyards in San Francisco in post-Civil War years. By the year 1868 he had moved to Eureka and worked for a year in the yard ofEuphronius Cousins. In the following year, at the age of about 25, he stepped out on his own and commenced building ships, which industry he followed until he retired thirty-two years later. It was a productive career to say the least. First in Eureka, and later in Fairhaven, Bendixsen turned out five dozen sailing ships alone. To this number must be added more sailing ships which were built up to 1904 by the Bendixsen Shipbuilding Corporation, a stock company which was formed in 1901 upon his retirement. Gordon Frazer Matthews, one of the last living shipbuilders of this era, described two aspects of the building of ships on Humboldt Bay which may account for Wawona's longevity. He was born in Eureka on 4 July 1877, and was a boy there when his father, Peter Mathews (sic), worked for Bendixsen. ''Wawona was constructed oflumber considered to be a species of the Douglas Fir, but the lumber was often called Humboldt Pine; in fact another softwood of the West Coast, tough and durable. The majority of the ship owners operating vessels in the lumber industry on the Pacific Coast were located in San Francisco, the home port for their vessels. A number of the owners had a preference for the vessels built with lumber cut on Humboldt Bay. No doubt that was the principal reason for the large number of bald-headed schooners having been built there. The long life of some ofthe vessels was second to none of those vessels built on the Pacific Coast. After Bendixsen established a permanent shipyard at Fairhaven, he erected a sawmill to cut long logs into the long SEA HISTORY, SUMMER 1981