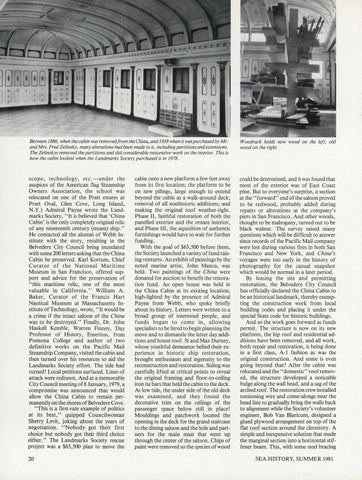 Between 1886, when the cabin was removedfrom the China, and 1938 when it was purchased by Mr. and Mrs. Fred Zelinsky, many alterations had been made to it, including partitions and extensions. The Zelinskys removed the partitions and did considerable restorative work on the interior. This is how the cabin looked when the Landmarks Society purchased it in 1978.

scope, technology, etc.-under the auspices of the American flag Steamship Owners Association, the school was relocated on one of the Pratt estates at Pratt Oval, Glen Cove, Long Island, N.Y.) Admiral Payne wrote the Landmarks Society, "It is believed that 'China Cabin' is the only completely original relic of any nineteenth century (steam) ship." He contacted all the alumni of Webb Institute with the story, resulting in the Belvedere City Council being inundated with some 200 letters asking that the China Cabin be preserved. Karl Kortum, Chief Curator of the National Maritime Museum in San Francisco, offered support and advice for the preservation of ''this maritime relic, one of the most valuable in California." William A. Baker, Curator of the Francis Hart Nautical Museum at Massachusetts Institute of Technology, wrote, "It would be a crime if the intact saloon of the China was to be destroyed." Finally, Dr. John Haskell Kemble, Warren Finney, Day Professor of History, Emeritus, from Pomona College and author of two definitive works on the Pacific Mail Steamship Company, visited the cabin and then turned over his resources to aid the Landmarks Society effort. The tide had turned! Local petitions surfaced. Lines of attack were redrawn. And at a memorable City Council meeting of 8 January, 1979, a compromise was announced that would allow the China Cabin to remain permanently on the shores of Belvedere Cove. "This is a first-rate example of politics at its best," quipped Councilwoman Sherry Levit, joking about the years of negotiation. "Nobody got their first choice but nobody got their third choice either." The Landmarks Society rescue project was a $63,500 plan to move the

could be determined, and it was found that most of the exterior was of East Coast pine. But to everyone's surprise, a section at the "forward" end of the saloon proved to be redwood, probably added during repairs or alterations at the company's piers in San Francisco. And other woods, thought to be mahogany, turned out to be black walnut. The survey raised many questions which wilLbe difficult to answer since records of the Pacific Mail company were lost during various fires in both San Francisco and New York, and China's voyages were too early in the history of photography for the casual snapshot which would be normal in a later period. By leasing the site and permitting restoration, the Belvedere City Council has officially declared the China Cabin to be an historical landmark, thereby exempting the construction work from local building codes and placing it under the special State code for historic buildings. And so the work goes forward as funds permit. The structure is now on its new platform, the hip roof and residential additions have been removed, and all work, both repair and restoration, is being done in a first class, A-1 fashion as was the original construction. And some is even going beyond that! After the cabin was relocated and the "domestic" roofremoved, the structure developed a noticable bulge along the wall head, and a sag of the arched roof. The restoration crew installed tensioning wire and come-alongs near the head line to gradually bring the walls back to alignment while the Society's volunteer engineer, Bob Van Blaricum, designed a glued plywood arrangement on top of the flat roof section around the clerestory. A simple and inexpensive solution that made the marginal section into a horizontal stiffener beam. This, with some steel bracing

cabin onto a new platform a few feet away from its first location; the platform to be on new pilings, large enough to extend beyond the cabin as a walk-around deck; removal of all nonhistoric additions; and making the original roof weather-tight. Phase II, faithful restoration of both the panelled exterior and the ornate interior, and Phase III, the aquisition of authentic furnishings would have to wait for further funding. With the goal of $63,500 before them, the Society launched a variety of fund raising ventures. An exhibit of paintings by the noted marine artist, John Manca, was held. Two paintings of the China were donated for auction to benefit the restoration fund. An open house was held in the China Cabin at its existing location, high-lighted by the presence of Admiral Payne from Webb, who spoke briefly about its history. Letters were written to a broad group of interested people, and funds began to come in, allowing specialists to be hired to begin planning the move and to dismantle the latter day additions and house roof. Si and Max Durney, whose youthful demeanor belied their experience in historic ship restoration, brought enthusiasm and ingenuity to the reconstruction and restoration. Siding was carefully lifted at critical points to reveal the original framing and floor-to-ceiling iron tie bars that held the cabin to the deck. At low tide, the under side of the old deck was examined, and they found the decorative trim on the ceilings of the passenger space below still in place! Mouldings and patchwork located the opening in the deck for the grand staircase to the dining saloon and the hole and partners for the main mast that went up through the center of the saloon. Chips of paint were removed so the species of wood