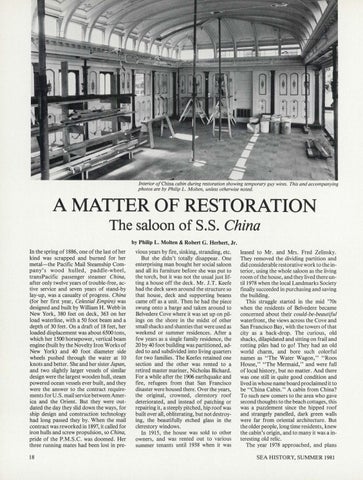 Interior of China cabin during restoration showing temporary guy wires. This and accompanying photos are by Philip L. Molten, unless otherwise noted.

A MATTER OF RESTORATION The saloon of S.S. China by Philip L. Molten & Robert G. Herbert, Jr. In the spring of 1886, one of the last of her kind was scrapped and burned for her metal-the Pacific Mail Steamship Company's wood hulled, paddle-wheel, transPacific passenger steamer China, after only twelve years of trouble-free, active service and seven years of stand-by lay-up, was a casualty of progress. China (for her first year, Celestial Empire) was designed and built by William H. Webb in New York, 380 feet on deck, 363 on her load waterline, with a 50 foot beam and a depth of 30 feet. On a draft of 18 feet, her loaded displacement was about 6500 tons, which her 1500 horsepower, vertical beam engine (built by the Novelty Iron Works of New York) and 40 foot diameter side wheels pushed through the water at 10 knots and better. She and her sister Japan, and two slightly larger vessels of similar design were the largest wooden hull, steam powered ocean vessels ever built, and they were the answer to the contract requirements for U.S. mail service between America and the Orient. But they were outdated the day they slid down the ways, for ship design and construction technology had long passed they by. When the mail contract was reworked in 1897, it called for iron hulls and screw propulsion, so China, pride of the P.M.S.C. was doomed. Her three running mates had been lost in pre18

vious years by fire, sinking, stranding, etc. But she didn't totally disappear. One enterprising man bought her social saloon and all its furniture before she was put to the torch, but it was not the usual just lifting a house off the deck . Mr. J.T. Keefe had the deck sawn around the structure so that house, deck and supporting beams came off as a unit. Then he had the piece swung onto a barge and taken around to Belvedere Cove where it was set up on pilings on the shore in the midst of other small shacks and shanties that were used as weekend or summer residences. After a few years as a single family residence, the 20 by 40 foot building was partitioned, added to and subdivided into living quarters for two families. The Keefes retained one section and the other was rented to a retired master mariner, Nicholas Bichard. For a while after the 1906 earthquake and fire, refugees from that San Francisco disaster were housed there. Over the years, the original, crowned, clerestory roof deteriorated, and instead of patching or repairing it, a steeply pitched, hip roof was built over all, obliterating, but not destroying, the beautifully etched glass in the clerestory windows. In 1915, the house was sold to other owners, and was rented out to various summer tenants until 1938 when it was

leased to Mr. and Mrs . Fred Zelinsky. They removed the dividing partition and did considerable restorative work to the interior, using the whole saloon as the living room of the house, and they lived there until 1978 when the local Landmarks Society finally succeeded in purchasing and saving the building. This struggle started in the mid '70s when the residents of Belvedere became concerned about their could-be-beautiful waterfront, the views across the Cove and San Francisco Bay, with the towers of that city as a back-drop. The curious, old shacks, dilapidated and sitting on frail and rotting piles had to go! They had an old world charm, and bore such colorful names as "The Water Wagon," "Roos House," "The Mermaid," and were full of local history, but no matter. And there was one still in quite good condition and lived in whose name board proclaimed it to be "China Cabin." A cabin from China? To such new comers to the area who gave second thoughts to the beach cottages, this was a puzzlement since the hipped roof and strangely panelled, dark green walls were far from oriental architecture. But the older people, long time residents, knew the cabin's origin, and to many it was a interesting old relic. The year 1978 approached, and plans SEA HISTORY, SUMMER 1981