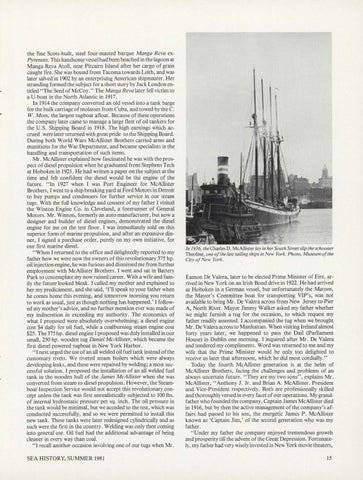 the fine Scots-built, steel four-masted barque Manga Reva exPyrenees. This handsome vessel had been beached in the lagoon at Manga Reva Atoll, near Pitcairn Island after her cargo of grain caught fire. She was bound from Tacoma towards Leith, and was later salved in 1902 by an enterprising American shipmaster. Her stranding formed the subject for a short story by Jack London entitled ''The Seed of McCoy.'' TheManga Reva later fell victim to a U-boat in the North Atlantic in 1917. In 1914 the company converted an old vessel into a tank barge for the bulk carriage of molasses from Cuba, and towed by the C. W. Moss, the largest tugboat afloat. Because of these operations the company later came to manage a large fleet of oil tankers for the U.S. Shipping Board in 1918. The high earnings which accrued were later returned with great pride to the Shipping Board. During both World Wars McAllister Brothers carried arms and munitions for the War Department, and became specialists in the handling and transportation of such items . Mr. McAllister explained how fascinated he was with the prospect of diesel propulsion when he graduated from Stephens Tech at Hoboken in 1921. He had written a paper on the subject at the time and felt confident the diesel would be the engine of the future. "In 1927 when I was Port Engineer for McAllister Brothers, I went to a ship breaking yard at Ford Motors in Detroit to buy pumps and condensers for further service in our steam tugs. With the full knowledge and consent of my father I visited the Winton Engine Co. in Cleveland, a forerunner of General Motors. Mr. Winton, formerly an auto manufacturer, but now a designer and builder of diesel engines, demonstrated the diesel engine for me on the test floor. I was immediately sold on this superior form of marine propulsion, and after an expansive dinner, I signed a purchase order, purely on my own initiative, for our first marine diesel. "When I returned to the office and delightedly reported to my father how we were now the owners of this revolutionary 375 hp. oil injection engine, he was furious and dismissed me from further employment with McAllister Brothers. I went and sat in Battery Park to contemplate my now ruined career. With a wife and family the future looked bleak. I called my mother and explained to her my predicament, and she said, 'I'll speak to your father when he comes home this evening, and tomorrow morning you return to work as usual, just as though nothing has happened.' I followed my mother's advice, and no further mention ever was made of my indiscretion in exceeding my authority. The economics of what I proposed were absolutely overwhelming; a diesel engine cost $4 daily for oil fuel, while a coalburning steam engine cost $25. The 375 hp. diesel engine I proposed was duly installed in our small, 250 hp . wooden tug Daniel McAllister, which became the first diesel powered tugboat in New York Harbor. "I next urged the use of an all welded oil fuel tank instead of the customary rivets. We riveted steam boilers which were always developing leaks, and these were repaired by welding; a most successful solution . I proposed the installation of an all welded fuel tank in the wooden hull of the James McAllister when she was converted from steam to diesel propulsion. However, the Steamboat Inspection Service would not accept this revolutionary concept unless the tank was first unrealistically subjected to 100 lbs. of internal hydrostatic pressure per sq. inch. The oil pressure in the tank would be minimal, but we acceded to the test, which was conducted successfully, and so we were permitted to install this new tank . These tanks were later redesigned cylindrically and as such were the first in the country. Welding was only then coming into general use. Oil fuel had the additional advantage of being cleaner in every way than coal. "I recall another occasion involving one of our tugs when Mr. SEA HISTORY, SUMMER 1981

In 1936, the Charles D. McAllister lay in her South Street slip the schooner Theoline, one of the last sailing ships in New York. Photo, Museum of the City of New York.

Eamon De Valera, later to be elected Prime Minister of Eire, arrived in New York on an Irish Bond drive in 1922. He had arrived at Hoboken in a German vessel, but unfortunately the Macom, the Mayor's Committee boat for transporting VIP's, was not available to bring Mr. De Valera across from New Jersey to Pier A, North River. Mayor Jimmy Walker asked my father whether we might furnish a tug for the occasion, to which request my father readily assented. I accompanied the tug when we brought Mr. De Valera across to Manhattan. When visiting Ireland almost forty years later, we happened to pass the Dail (Parliament House) in Dublin one morning. I inquired after Mr. De Valera and tendered my compliments. Word was returned to me and my wife that the Prime Minister would be only too delighted to receive us later that afternoon, which he did most cordially." Today the fourth McAllister generation is at the helm of McAllister Brothers, facing the challenges and problems of an always uncertain future. "They are my two sons", explains Mr. McAllister, "Anthony J. Jr. and Brian A. McAllister. President and Vice-President respectively. Both are professionally skilled and thoroughly versed in every facet of our operations. My grandfather who founded the company, Captain James McAllister died in 1916, but by then the active management of the company's affairs had passed to his son, the energetic James P. McAllister known as 'Captain Jim,' of the second generation who was my father. "Under my father the company enjoyed tremendous growth and prosperity till the advent of the Great Depression. Fortunately, my father had very wisely invested in New York movie theaters,