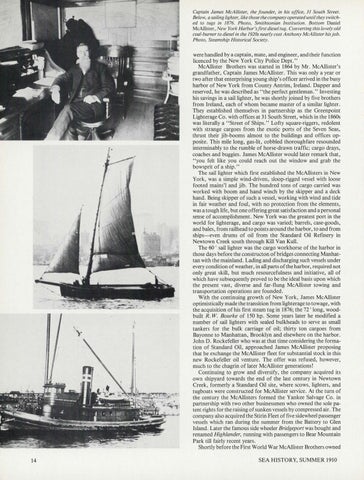 were handled by a captain, mate, and engineer, and their function licenced by the New York City Police Dept.'' McAllister Brothers was started in 1864 by Mr. McAllister's grandfather, Captain James McAllister. This was only a year or two after that enterprising young ship's officer arrived in the busy harbor of New York from County Antrim, Ireland. Dapper and reserved, he was described as "the perfect gentleman." Investing his savings in a sail lighter, he was shortly joined by five brothers from Ireland, each of whom became master of a similar lighter. They established themselves in partnership as the Greenpoint Lighterage Co. with offices at 31 South Street, which in the 1860s was literally a "Street of Ships." Lofty square-riggers, redolent with strange cargoes from the exotic ports of the Seven Seas, thrust their jib-booms almost to the buildings and offices opposite. This mile long, gas-lit, cobbled thoroughfare resounded interminably to the rumble of horse-drawn traffic; cargo drays, coaches and buggies. James McAllister would later remark that, "you felt like you could reach out the window and grab the bowsprit of a ship." The sail lighter which first established the McAllisters in New York, was a simple wind-driven, sloop-rigged vessel with loose footed mains'! and jib. The hundred tons of cargo carried was worked with boom and hand winch by the skipper and a deck hand. Being skipper of such a vessel, working with wind and tide in fair weather and foul, with no protection from the elements, was a tough life, but one offering great satisfaction and a personal sense of accomplishment. New York was the greatest port in the world for lighterage, and cargo was varied; barrels, case-goods, and bales, from railhead to points around the harbor, to and from ships-even drums of oil from the Standard Oil Refinery in Newtown Creek south through Kill Van Kull. The 60 ' sail lighter was the cargo workhorse of the harbor in those days before the constructon of bridges connecting Manhattan with the mainland. Lading and discharging such vessels under every condition of weather, in all parts of the harbor, required not only great skill, but much resourcefulness and initiative, all of which have subsequently proved to be the ideal basis upon which the present vast, diverse and far-flung McAllister towing and transportation operations are founded. With the continuing growth of New York, James McAllister optimistically made the transition from lighterage to towage, with the acquisition of his first steam tug in 1876; the 72' long, woodbuilt R. W. Bourke of 150 hp. Some years later he modified a number of sail lighters with sealed bulkheads to serve as small tankers for the bulk carriage of oil; thirty ton cargoes from Bayonne to Manhattan, Brooklyn and elsewhere on the harbor. John D. Rockefeller who was at that time considering the formation of Standard Oil, approached James McAllister proposing that he exchange the McAllister fleet for substantial stock in this new Rockefeller oil venture. The offer was refused, however, much to the chagrin of later McAllister generations! Continuing to grow and diversify, the company acquired its own shipyard towards the end of the last century in Newtown Creek, formerly a Standard Oil site, where scows, lighters, and tugboats were constructed for McAllister service. At the turn of the century the McAllisters formed the Yankee Salvage Co. in partnership with two other businessmen who owned the sole patent rights for the raising of sunken vessels by compressed air. The company also acquired the Stirin Fleet of five sidewheel passenger vessels which ran during the summer from the Battery to Glen Island. Later the famous side wheeler Bridgeport was bought and renamed Highlander, running with passengers to Bear Mountain Park till fairly recent years. Shortly before the First World War McAllister Brothers owned SEA HISTORY, SUMMER 1910