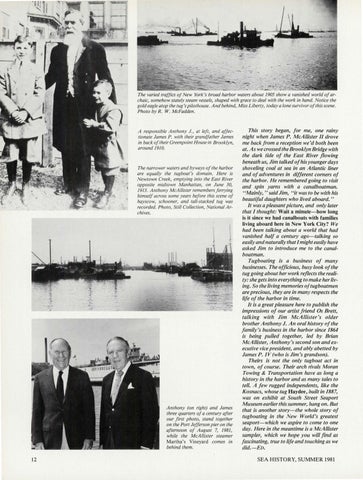 The varied traffics of New York's broad harbor waters about 1905 show a vanished world of archaic, somehow stately steam vessels, shaped with grace to deal with the work in hand. Notice the gold eagle atop the tug's pilothouse. And behind, Miss Liberty, today a lone survivor of this scene. Photo by R. W. McFadden.

A responsible Anthony J., at left, and affectionate James P. with their grandfather James in back of their Greenpoint House in Brooklyn, around 1910.

The narrower waters and byways of the harbor are equally the tugboat's domain. Here is Newtown Creek, emptying into the East River opposite midtown Manhattan, on June 30, 1913. Anthony McAllister remembers ferrying himself across some years before this scene of hayscow, schooner, and tall-stacked tug was recorded. Photo, Still Collection, National Archives.

Anthony (on right) and James three quarters of a century after our first photo, stand together on the Port Jefferson pier on the afternoon of August 7, 1981, while the McAllister steamer Martha's Vineyard comes in behind them.

This story began, for me, one rainy night when James P. McAllister II drove me back from a reception we'd both been at. As we crossed the Brooklyn Bridge with the dark tide of the East River flowing beneath us, Jim talked of his younger days shoveling coal at sea in an Atlantic liner and of adventures in different corners of the harbor. He remembered going to visit and spin yarns with a canalboatman. "Mainly, "said Jim, "it was to be with his beautiful daughters who lived aboard. " ft was a pleasant picture, and only later that I thought: Wait a minute-how long is it since we had canalboats with families living aboard here in New York City? We had been talking about a world that had vanished half a century ago-talking so easily and naturally that I might easily have asked Jim to introduce me to the canalboatman. Tugboating is a business of many businesses. The officious, busy look of the tug going about her work reflects the reality: she gets into everything to make her living. So the living memories of tugboatmen are precious, they are in many respects the life of the harbor in time. It is a great pleasure here to publish the impressions of our ar(ist friend Os Brett, talking with Jim McAllister's older brother Anthony J. An oral history of the family's business in the harbor since 1864 is being pulled together, led by Brian McAllister, Anthony's second son and executive vice president, and ably abetted by James P. IV (who is Jim's grandson). Theirs is not the only tugboat act in town, of course. Their arch rivals Moran Towing & Transportation have as long a history in the harbor and as many tales to tell. A few rugged independents, like the Kosnacs, whose tug Haydee, built in 1887, was on exhibit at South Street Seaport Museum earlier this summer, hang on. But that is another story-the whole story of tugboating in the New World's greatest seaport-which we aspire to come to one day. Here in the meantime is a McAllister sampler, which we hope you will find as fascinating, true to life and touching as we did.-ED. SEA HISTORY, SUMMER 1981