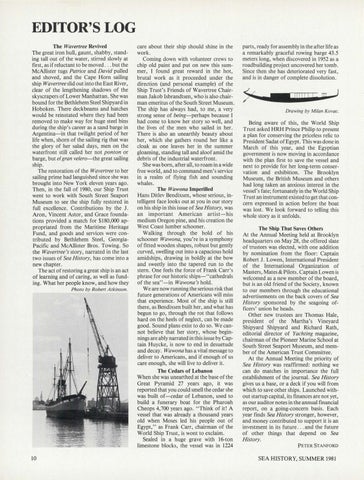 EDITOR'S LOG The Wavertree Revived The great iron hull, gaunt, shabby, standing tall out of the water, stirred slowly at first, as if reluctant to be moved ... but the McAllister tugs Patrice and David pulled and shoved, and the Cape Horn sailing ship Wavertree slid out into the East River, clear of the lengthening shadows of the skyscrapers of Lower Manhattan. She was bound for the Bethlehem Steel Shipyard in Hoboken. There deckbeams and hatches would be reinstated where they had been removed to make way for huge steel bins during the ship's career as a sand barge in Argentina-in that twilight period of her life when, shorn of the sailing rig that was the glory of her salad days, men on the waterfront still called her not ponton or barge, but el gran velero-the great sailing ship. The restoration of the Wavertree to her sailing prime had languished since she was brought into New York eleven years ago. Then, in the fall of 1980, our Ship Trust went to work with South Street Seaport Museum to see the ship fully restored in full excellence. Contributions by the J. Aron, Vincent Astor, and Grace foundations provided a match for $180,000 appropriated from the Maritime Heritage Fund, and goods and services were contributed by Bethlehem Steel, GeorgiaPacific and McAllister Bros. Towing. So the Wavertree's story, narrated in the last two issues of Sea History, has come into a new chapter. The act of restoring a great ship is an act of learning and of caring, as well as funding. What her people know, and how they Photo by Robert Atkinson.

care about their ship should shine in the work. Coming down with volunteer crews to chip old paint and put on new this summer, I found great reward in the hot, brutal work as it proceeded under the direction (and personal example) of the Ship Trust's Friends of Wavertree Chairman Jakob Isbrandtsen, who is also chairman emeritus of the South Street Museum. The ship has always had, to me, a very strong sense of being-perhaps because I had come to know her story so well, and the lives of the men who sailed in her. There is also an unearthly beauty about her, which she gathers round her like a cloak as one leaves her in the summer gloaming, standing tall and aloof amid the debris of the industrial waterfront. She was born, after all, to roam in a wide free world, and to command men's service in a realm of flying fish and sounding whales. The Wawona Imperilled Hans Ditlev Bendixsen, whose serious, intelligent face looks out at you in our story on his ship in this issue of Sea History, was an important American artist-his medium Oregon pine, and his creation the West Coast lumber schooner. Walking through the hold of his schooner Wawona, you're in a symphony of fitted wooden shapes, robust but gently curved, swelling out into a capacious hold amidships, drawing in boldly at the bow and sweetly into the tapered run to the stern. One feels the force of Frank Carr's phrase for our historic ships-' 'cathedrals of the sea"-in Wawona's hold. We are now running the serious risk that future generations of Americans will miss that experience. Most of the ship is still there, as Bendixsen built her, and what has begun to go, through the rot that follows hard on the heels of neglect, can be made good. Sound plans exist to do so. We cannot believe that her story, whose beginnings are ably narrated in this issue by Captain Huycke, is now to end in desuetude and decay. Wawona has a vital message to deliver to Americans, and if enough of us care enough, she will live to deliver it. The Cedars of Lebanon When she was unearthed at the base of the Great Pyramid 27 years ago, it was reported that you could smell the cedar she was built of-cedar of Lebanon, used to build a funerary boat for the Pharoah Cheops 4,700 years ago. "Think of it! A vessel that was already a thousand years old when Moses led his people out of Egypt," as Frank Carr, chairman of the World Ship Trust, is wont to exclaim. Sealed in a huge grave with 16-ton limestone blocks, the vessel was in 1224

parts, ready for assembly in the after life as a remarkably graceful rowing barge 43.5 meters long, when discovered in 1952 as a roadbuilding project uncovered her tomb. Since then she has deteriorated very fast, and is in danger of complete dissolution.

Being aware of this, the World Ship Trust asked HRH Prince Philip to present a plan for conserving the priceless relic to President Sadat of Egypt. This was done in March of this year, and the Egyptian government is now moving in accordance with the plan first to save the vessel and next to provide for her long-term conservation and exhibition. The Brooklyn Museum, the British Museum and others had long taken an anxious interest in the vessel's fate; fortunately in the World Ship Trust an instrument existed to get that concern expressed in action before the boat was lost. We look forward to telling this whole story as it unfolds.

The Ship That Saves Others At the Annual Meeting held at Brooklyn headquarters on May 28, the offered slate of trustees was elected, with one addition by nomination from the floor: Captain Robert J. Lowen, International President of the International Organization of Masters, Mates & Pilots. Captain Lowen is welcomed as a new member of the board, but is an old friend of the Society, known to our members through the educational advertisements on the back covers of Sea History sponsored by the seagoing officers' union he heads. Other new trustees are Thomas Hale, president of the Martha's Vineyard Shipyard Shipyard and Richard Rath, editorial director of Yachting magazine, chairman of the Pioneer Marine School at South Street Seaport Museum, and member of the American Trust Committee. At the Annual Meeting the priority of Sea History was reaffirmed: nothing we can do matches in importance the full establishment of the journal. Sea History gives us a base, or a deck if you will from which to save other ships. Launched without startup capital, its finances are not yet, as our auditor notes in the annual financial report, on a going-concern basis. Each year finds Sea History stronger, however, and money contributed to support it is an investment in its future ... and the future of other things that depend on Sea History. PETER STANFORD