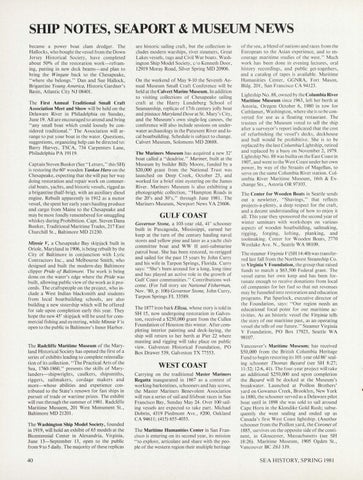 SHIP NOTES, SEAPORT & MUSEUM NEWS became a power boat clam dredger. The Hallocks, who bought the vessel from the Down Jersey Hi storical Society, have completed about 500Jo of the restoration work-reframing, putting in new deck beams-and plan to bring the Wingate back to the Chesapeake, "where she belongs." Dan and Sue Hallock, Brigantine Young America, Historic Gardner's Basin, Atlantic City NJ 08401. The First Annual Trad itional Small Craft Association Meet and Show will be held on the Delaware River in Phi ladelphia on Sunday, June 19 . All are encouraged to attend and bring "any small boat which could loosely be considered traditional." The Association will arrange to put your boat in the water. Questions, suggest ions, organizing help can be directed to: Barry Harvey , TSCA, 734 Carpenters Lane, Philadelphia PA 19119 . Captain Steven Bunker (See ''Letters, '' this SH) is restoring the 60' wooden Yankee Hero on the Chesapeake, expecting that she will pay her way doing restoration a nd repa ir work on commercial boats, yachts, and historic vessels, rigged as a brigantine (half-brig) , with an auxiliary diesel engine. Rebuilt apparent ly in 1912 as a motor vessel, she spent her ea rl y years hauling produce and cargo from Maine to the Chesapeake and may be most fondly remembered for smuggling whiskey during Prohibition. Capt. Steven Dana Bunker, Traditional Maritime Trades, 217 East Churchill St., Baltimore MD 21230.

Minnie V, a Chesapeake Bay skipjack built in Oriole, Maryland in 1906, is being rebuilt by the City of Baltimore in conjunction with Lyric Contractors Inc., and Melbourne Smith, who designed and built the modern-day Baltimore clipper Pride of Baltimore. The work is being done on the water's edge where the Pride was built, allowing public view of the work as it proceeds. The cra ft speople on the project, who include a West Indian black smith and students from local boatbuilding school s, are also building a new sistership which will be offered for sale upon completion early this year. They hope the new 45' skip jack will be used for commercial fi shing and oystering, while Minnie Vis open to the public in Baltimore's Inner Harbor.

The Radcliffe Maritime Museum of the Maryland Historical Society has opened the first of a series of exhibits leading to complete reinstallation of its co llection. "The Practical Arts of the Sea, 1760-1860," presents the ski lls of Marylanders-shipwrights, caulkers, shipsmith s, riggers, sa ilmaker s, cordage makers and more-whose abilities and experience contributed to the State's renown for fast ships in pursuit of trade or wartime prizes. The exhibit will run through the summer of 1981 . Radcliffe Maritime Musuem, 201 West Monument St., Baltimore MD 21201. The Washington Shi p Model Society, founded in 19 19, will hold an exhibit of 65 models at the Bicentennial Center in Alexandria, Virginia, June 13-September 13 , open to the public from 9 to 5 daily. The majority of these replicas

are historic sailing craft, but the collection includes modern warships, ri ver steamers, Great Lakes vessels, tugs a nd Civi l War boats. Washington Ship Model Society, c/o Kenneth Door, 12919 Moray Road , Sil ver Spring MD 20906. On the weekend of May 9-10 the Seventh Annual Museum Small Craft Conference will be held at the Calvert Marine Museum. In addition to visiting collections of Chesapeake sailing craft at the Harry Lundeberg School of Seamanship, replicas of 17th century jolly boat and pinnace Matyland Dove at St. Mary 's City, and the Museum 's own single-log canoes, the co nference will a lso include sessions on underwater a rchaeology in the Patuxent River and local boatbuilding. Schedule is subject to change. Calvert Mu seum , Solomons MD 20688. The Mariners Museum has acquired a new 32' boat called a "deadrise." Mariner, built at the Museum by builder Billy Moore, funded by a $20,000 grant from the National Trust was launched on Deep Creek, October 23, and worked for a brief stint oystering on the J ames River. Mariners Museum is also exhibiting a photographic collection, "Hampton Roads in the 20's and 30's," through June 198 1. The Mariners Museum, Newport News VA 23606.

GULF COAST Governor Stone, a 103-year old, 41 ' schooner built in Pascagoula, Mississippi, earned her keep at the turn of the century hauling naval stores and yellow pine and later as a yacht clu b comm ittee boat and WW II anti-submarine patrol boat. She has been restored , re-rerigged and sai led for the past 15 years by John Curry and his wife in Tarpon Springs, Florida. Curry says: " She's been around for a long, long time and has played an active role in the growth of Gulf Coast communities." Contributions welco me. (For full story see National Fisherman, Nov. '80, p. 106) Governor Stone, John Curry, Tarpon Springs FL 33589 . The 1877 iron bark Elissa, whose story is told in SH 15 , now undergoing restoration in Galveston , received a $250,000 grant from the Cu llen Foundation of Houston this winter. After completing interior painting and deck-laying, the ship will return to her berth at Pier 22 where masting and rigging will take place on public view. Galveston Hi storical Foundation , PO Box Drawer 539, Galveston TX 77553.

WEST COAST Carrying on the traditional Master Mariners Regatta inaugurated in 1867 as a contest of working barkentines, schooners and hay scows, the Master Mariners Benevo lent Association will run a series of sail and lifeboat races in San Francisco Bay, Sunday May 24. O ver 100 sailing vessels are expected to take part. Michael Dobrin, 4319 Piedmont Ave., #200, Oakland CA 94611; (415) 655-4033 . The Maritime Humanities Center in San Francisco is entering on its second year, it s mission "to explore, articulate and share with the people of the western region their multiple heritage

of the sea , a bl end of nations and races from the Europea n to the Asian experience, and to encourage maritime studies of the west. " Much work has been done in eveni ng lect ures, ora l hi sto ry recordings, and public get-toget hers, a nd a cata log of tapes is available. Maritime Huma nities Center , GGNRA , Fort Maso n, Bldg. 201, Sa n Francisco CA 94123. Light ship No . 88, owned by the Columbia River Maritime Museum since 1963, left her berth at Astoria, Oregon October 6, 1980 in tow for Cath la met, Washington, where she is to be convert ed for use as a floating restaurant. The trustees of the Museum voted to sell the ship after a surveyor 's report indicated that the cost of refurbi shin g the vessel' s deck s, deckhou se and hull would be prohibitive. She is to be replaced by the last Columbia Light sh ip, retired and replaced by a buoy on November 2, 1979. Light ship No. 88 was builta on the East Coast in 1907, a nd went to the West Coast under her own power, by way of the Straaits of Magellan, to serve on the sa me Columbia Ri ver station. Co lumbia Ri ver Maritime Museum, 16th & Exchange Sts., Astoria OR 97 103. Th e Center for Wooden Boats in Seatt le sends out a newletter, "Shavings," that reflects proj ects-a-plenty, a deep respect for the craft, and a decent understanding of how to enjoy it all. This year they sponsored th e seco nd year of winter seminars with workshops on va rious aspects of wooden boatbuilding, sailmaking, rigging, forging, lofting, pla nking , a nd toolmak ing. Center for Wooden Boats, 2770 Westlake Ave. N., Seattle WA 98109 . The steamer Virginia V(SH 14:40) was tran sferred last fall from the Northwest Steamship Co. to Virginia V Foundation, the gro up that rai sed funds to match a $63,500 Federa l grant. The vessel earns her own keep a nd has been fortunate enough to receive dona tions from local oil co mpanies for her fuel so that net revenues may be funneled into restoration a nd educat ion programs. Pat Spurlock, exec utive director of the Foundation, says: "Our region needs an educationa l focal point for our maritime acti vities. As an hi storic vessel the Virginia tells the story of our maritime past, as an operating vessel she tell s of our future. " Steamer Virginia V Foundation, PO Box 17923 , Seattle WA 98107. Vancouver' s Maritime Museum; has received $50,000 from the British Columbi a Heri tage Fund to begin restoring its IOI -year o ld 86' sealing schooner Thomas Bayard (see SH 8:27; 11 :32; 12:6, 41) . The four-year project will take an additional $250,000 and upon completion the Bayard will be docked at the Museum 's breakwater. Launched at Poillon Brothers' ya rd on Gowanus Creek, Brookl yn, New York in 1880, the schooner served as a Delaware pilot boat unti l in 1898 she was sold to sail around Cape Horn in the Klondike Gold Rush; subsequently she went seal ing and ended up as Canada's first West Coast lightship . (Another schoon er from the Poillon yard, the Coronet of 1885, survives on the opposite side of the continent , in Gloucester, Massachusetts (see SH 18:26). Maritime Museum, 1905 Ogden St., Vancouver BC Z6J 3J9 .