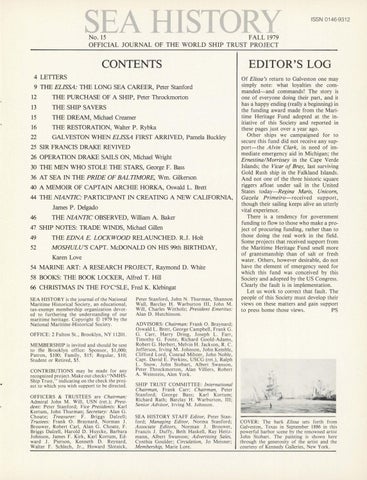 No. 15 FALL 1979 OFFICIAL JOURNAL OF THE WORLD SHIP TRUST PROJECT

THE PURCHASE OF A SHIP, Peter Throckmorton

THE NIANTIC OBSERVED, William A. Baker

EDITOR&#39;S LOG Of Elissa&#39;s return to Galveston one may simply note: what loyalties she commanded-and commands! The story is one of everyone doing their part, and it has a happy ending (really a beginning) in the funding award made from the Maritime Heritage Fund adopted at the in. itiative of this Society and reported in these pages just over a ye\ir ago. Other ships we campaigned for to secure this fund did not receive any support-the Alvin Clark, in need of immediate emergency aid in Michigan; the Ernestina/Morrissey in the Cape Verde Islands; the Vicar of Bray, last surviving Gold Rush ship in the Falkland Islands. And not one of the three historic square riggers afloat under sail in the United States today-Regina Maris, Unicorn, Gaze/a Primeiro-received support, though their sailing keeps alive an utterly vital experience. There is a tendency for government funding to flow to those who make a project of procuring funding, rather than to those doing the real work in the field. Some projects that received support from the Maritime Heritage Fund smell more of grantsmanship than of salt or fresh water. Others, however desirable, do not have the element of emergency need for which this fund was conceived by this Society and adopted by the US Congress. Clearly the fault is in implementation. Let us work to correct that fault. The people of this Society must develop their views on these matters and gain support to press home those views. PS

COVER: The bark Elissa sets forth from Galveston, Texas in September 1886 in this powerful harbor scene by the renowned artist John Stobart. The painting is shown here through the generosity of the artist and the courtesy of Kennedy Galleries, New York.