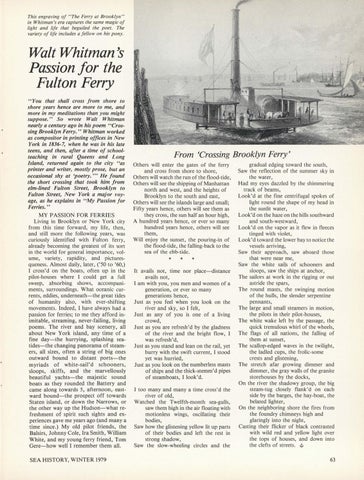 This engraving of "The Ferry at Brooklyn" in Whitman's era captures the same magic of light and life that beguiled the poet. The variety of life includes a fellow on his pony.

Walt Whitman~ Passion for the Fulton Ferry "You that shall cross from shore to shore years hence are more to me, and more in my meditations than you might suppose." So wrote Walt Whitman nearly a century ago in his poem ''Crossing Brooklyn Ferry." Whitman worked as compositor in printing offices in New York in 1836-7, when he was in his late teens, and then, after a time of schoolteaching in rural Queens and long ls/and, returned again to the city "as printer and writer, mostly prose, but an occasional shy at 'poetry."' He found the short crossing that took him from elm-lined Fulton Street, Brooklyn to Fulton Street, New York a major voyage, as he explains in "My Passion for Ferries." MY PASSION FOR FERRIES Living in Brooklyn or New York city from this time forward, my life, then, and still more the following years, was curiously identified with Fulton ferry, already becoming the greatest of its sort in the world for general importance, volume, variety, rapidity, and picturesqueness. Almost daily, later, ('50 to '60,) I cross'd onÂˇ the boats, often up in the pilot-houses where I could get a full sweep, absorbing shows, accompaniments, surroundings. What oceanic currents, eddies, underneath-the great tides of humanity also, with ever-shifting movements. Indeed, I have always had a passion for ferries; to me they afford inimitable, streaming, never-failing, living poems . The river and bay scenery, all about New York island, any time of a fine day-the hurrying, splashing seatides-the changing panorama of steamers, all sizes, often a string of big ones outward bound to distant ports-the myriads of white-sail'd schooners, sloops, skiffs, and the marvellously beautiful yachts-the majestic sound boats as they rounded the Battery and came along towards 5, afternoon, -eastward bound-the prospect off towards Staten island, or down the Narrows, or the other way up the Hudson-what refreshment of spirit such sights and experiences gave me years ago (and many a time since.) My old pilot friends, the Balsirs, Johnny Cole, Ira Smith, William White, and my young ferry friend, Tom Gere-how well I remember them all. SEA HISTORY, WINTER 1979

I too many and many a time cross' d the river of old, Watched the Twelfth-month sea-gulls, saw them high in the air floating with motionless wings, oscillating their bodies, Saw how the glistening yellow lit up parts of their bodies and left the rest in strong shadow, Saw the slow-wheeling circles and the

gradual edging toward the south, Saw the reflection of the summer sky in the water, Had my eyes dazzled by the shimmering track of beams, Look'd at the fine centrifugal spokes of light round the shape of my head in the sunlit water, Look'd on the haze on the hills southward and south-westward, Look'd .on the vapor as it flew in fleeces tinged with violet, Look'd toward the lower bay to notice the vessels arriving, Saw their approach, saw aboard those that were near me, Saw the white sa* of schooners and sloops, saw the ships at anchor, The sailors at work in the rigging or out astride the spars, The round masts, the swinging motion of the hulls, the slender serpentine pennants, The large and small steamers in motion, the pilots in their pilot-houses, The white wake left by the passage, the quick tremulous whirl of the wheels, The flags of all nations, the falling of them at sunset, The scallop-edged waves in the twilight, the ladled cups, the frolic-some crests and glistening, The stretch afar growing dimmer and dimmer, the gray walls of the granite storehouses by the docks, On the river the shadowy group, the big steam-tug closely flank'd on each side by the barges, the hay-boat, the belated lighter, On the neighboring shore the fires from the foundry chimneys high and glaringly into the night, Casting their flicker of black contrasted with wild red and yellow light over the tops of houses, and down into the clefts of streets. w 63