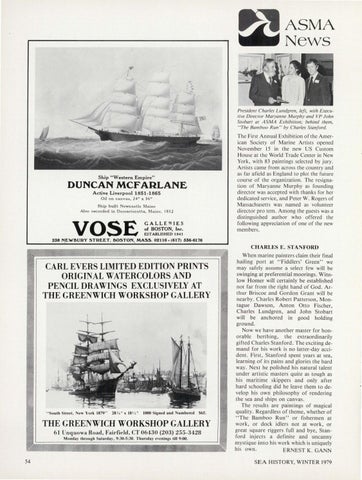 GALLE ~I ES of BOSTON, Inc.

The First Annual Exhibition of the American Society of Marine Artists opened November 15 in the new US Custom House at the World Trade Center in New York, with 83 paintings selected by jury. Artists came from across the country and as far afield as England to plot the future course of the organization . The resignation of Maryanne Murph y as founding director was accepted with thanks for her dedicated service, and Peter W. Rogers of Massachusetts was named as volunt eer director pro tern. Among the guests was a distinguished author who offered the following appreciation of one of the new members.

When marine painters claim their fina l hailing port at "Fiddlers' Green" we may safely assume a select few will be swinging at preferential moorings . Winslow Homer will certainly be establis hed not far from the right hand of God. Arthur Briscoe and Gordon Grant will be nearby. Charles Robert Patterso n, Montague Dawson, Anton Otto Fischer, Charles Lundgren, and John Stobart will be a nchored in good holding ground. Now we have another master for honorab le berthi ng, the extraordinarily gifted Charles Stanford. The exciting demand for his work is no latter-day acc ident. First, Stan ford spent years at sea, learning of its pains and glories the hard way. Next he polished his natural talent under artistic masters quite as tough as his maritime skippers and only after hard schooling did he leave them to develop his own philoso phy of rendering the sea and ships on canvas. The resu lts are paintings of magical quality. Regardless of theme, whether of "The Bamboo Run" or fishermen at work, or dock id lers not at work, or great square riggers full and bye, Stanford injects a definite a nd uncanny mys tique into his work which is uniquely his own. ERNEST K. GANN SEA HISTORY, WINTER 1979