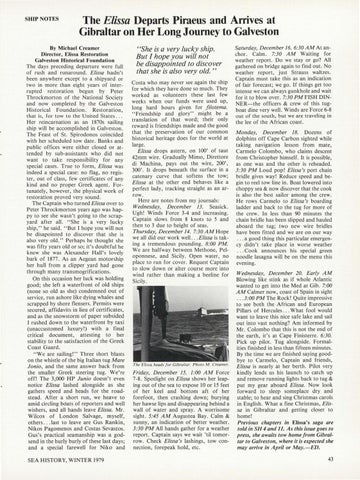 By Michael Creamer Director, Elissa Restoration Galveston Historical Foundation The days preceding departure were full of rush and runaround. Elissa hadn't been anywhere except to a shipyard or two in more than eight years of interrupted restoration begun by Peter Throckmorton of the National Society and now completed by the Galveston Historical Foundation. Restoration, that is, for tow to the United States ... Her reincarnation as an 1870s sailing ship will be accomplished in Galveston. The Feast of St. Spirodonos coincided with her scheduled tow date. Banks and public offices were either closed or attended by sub-assistants who did not want to take responsibility for any special cases. True to form, Elissa was indeed a special case: no flag, no register, out of class, few certificates of any kind and no proper Greek agent. Fortunately, however, the physical work of restoration proved very sound. The Captain who turned Elissa over to Peter Throckmorton years ago was happy to see she wasn't going to the scrapyard after all. "She is a very lucky ship," he said. "But l hope you will not be disapointed to discover that she is also very old.,., Perhaps he thought she was fifty years old or so; it's doubtful he knew she was Alexander Hall's lovely bark of 1877. As an Aegean motorship her hull from a clipper yard had gone through many transmogrifications. On this occasion her luck was holding good; she left a waterfront of old ships (none so old as she) condemned out of service, run ashore like dying whales and scrapped by shore flensers. Permits were secured, affidavits in lieu of certificates, and as the snowstorm of paper subsided l rushed down to the waterfront by taxi (unaccustomed luxury!) with a final critical document, attesting to her stability to the satisfaction of the Greek Coast Guard. "We are sailing!" Three short blasts on the whistle of the big Italian tug Mare Jania, and the same answer back from the smaller Greek steering tug. We're off! The 3,000 HP Junia doesn't even notice Elissa lashed alongside as she gathers speed and heads for the roadstead. After a short run, we heave to amid circling boats of reporters and well wishers, and all hands leave Elissa. Mr. Wilcox of London Salvage, myself, others ... last to leave are Gus Rankin, Nikos Pagomenos and Costas Sevastos. Gus's practical seamanship was a godsend in the hurly burly of these last days; and a special farewell for Niko and SEA HISTORY, WINTER 1979

"She is a very lucky ship. But I hope you will not be disappointed to discover that she is also very old. " Costa who may never see again the ship for which they have done so much. They worked as volunteers these last few weeks when our funds were used up, long hard hours given for filotema. "Friendship and glory" might be a translation of that word; their only reward is friendships made and the good that the preservation of our common historical heritage does for the world at large. Elissa drops astern, on 100' of taut 42mm wire. Gradually Mimo, Direttore di Machina, pays out the wire, 200', 300' . It drops beneath the surface in a catenary curve that softens the tow; Elissa at the other end behaves like a perfect lady, tracking straight as an arrow. Here are notes from my journals: Wednesday, December 13. Seasick. Ugh! Winds Force 3-4 and increasing. Captain slows from 8 knots to 5 and then to 3 due to height of seas. Thursday, December 14. 7:30 AM Hope we all did our work well .. . . Elissa is taking a tremendous pounding. 8:00 PM. We are halfway between Methone, Peloponnese, and Sicily. Open water, no place to run for cover. Request Captain to slow down or alter course more into wind rather than making a beeline for Sicily.

Friday, December 15. 1:00 AM Force 7-8. Spotlight on Elissa shows her leaping out of the sea to expose 10 or 15 feet of her keel and bottom aft of her forefoot, then crashing down; burying her hawse lips and disappearing behind a wall of water and spray. A worrisome sight. 5:45 AM Augustea Bay. Calm & sunny, an indication of better weather. 3:30 PM All hands gather for a weather report. Captain says we wait 'til tomorrow. Check Elissa's lashings, tow connection, forepeak hold, etc.

Saturday, December 16. 6:30 AM At anchor. Calm. 7:30 AM Waiting for weather report. Do we stay or go? All gathered on bridge again to find out. No weather report, just Strauss waltzes. Captain must take this as an indication of fair forecast; we go. If things get too intense we can always gunkhole and wait for it to blow over. 7:30 PM FISH DINNER-the officers & crew of this tugboat dine very well. Winds are Force 6-8 out of the south, but we are traveling in the lee of the African coast. Monday, December 18. Dozens of dolphins off Cape Carbon sighted while taking navigation lesson from mate, Carmelo Colombo, who claims descent from Christopher himself. It is possible, as one was and the other is reheaded . 3:30 PM Loud pop! Elissa's port chain bridle gives way! Reduce speed and begin to reel tow line in. Boat lowered into choppy sea & now discover that the cook is also the best sailor among the crew. He rows Carmelo to Elissa's boarding ladder and back to the tug for more of the crew. In less than 90 minutes the chain bridle has been slipped and hauled aboard the tug; two new wire bridles have been fitted and we are on our way ... a good thing this particular emergency didn't take place in worse weather ... Cook announces his special green noodle lasagna will be on the menu this evening. Wednesday, December 20. Early AM Blowing like stink as if whole Atlantic wanted to get into the Med at Gib. 7:00 AM Calmer now, coast of Spain in sight .. . 3:00 PM The Rock! Quite impressive to see both the African and European Pillars of Hercules ... What fool would want to leave this nice safe lake and sail out into vast nothing? Am informed by Mr. Colombo that this is not the end of the earth, it's at Cape Finisterre. 6:30. Pick up pilot. Tug alongside. Formalities finished in less than fifteen minutes. By the time we are finished saying goodbye to Carmelo, Captain and friends, Elissa is nearly at her berth. Pilot very kindly lends us his launch to catch up and remove running lights back to tug & put my gear aboard Elissa. Now look forward to sleep someplace dry and stable; to hear and sing Christmas carols in English. What a fine Christmas, Elissa in Gibraltar and getting closer to home! Previous chapters in Elissa's saga are told in SH 4and11. As this issue goes to press, she awaits tow home from Gibraltar to Galveston, where it is expected she may arrive in April or May.-ED. 43