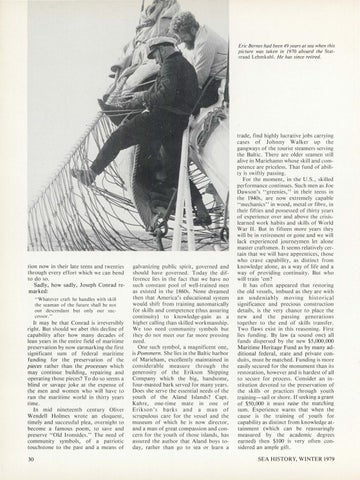 Eric Bernes had been 49 years at sea when this picture was taken in 1970 aboard the Statsraad Lehmkuhl. He has since retired.

tion now in their la te teens a nd twenti es throu gh eve ry effort which we can bend to do so. Sadly, how sadly, Joseph Conrad remark ed: "W hateve r craft he handles with sk ill th e sea ma n of the future sha ll be not our desce nd a nt but on ly our successo r. " It may be th at Conrad is irreversibly ri ght. But should we abet thi s declin e of capabi lit y a fter how many decades of Jean years in th e entire field of maritime prese rvation by now earmarking th e fir st significant sum of federal maritime fundin g for the prese rvation o f th e pieces rather than the processes which may con tinu e building, repairin g and operat in g those pieces? To do so see ms a blind or savage joke at the ex pense of th e men and women who will hav e to run the ma ritim e wor ld in thirty yea rs time. In mid nineteenth ce ntury Oliver Wendell Holmes wrote an eloquent, tim ely a nd success ful plea , overnight to beco me a famous poem, to save and preserve " Old Ironsides." The need of commun it y symbols, of a patriotic to uchstone to the past and a mea ns of

ga lvan izing public spmt, governed and shou ld have governed. Today t he difference lies in the fact that we have no such co nstant pool of well-trained men as existed in the 1860s. None dreamed then that America's edu cat iona l sys tem would shift from tra ining automatica ll y for skill s and competence (thus ass urin g co ntinuity) to knowledge-gain as a hi gher calling th an sk illed workmans hip. We too need comm unit y symbols but they do not meet our far more pressing need . One such symbol, a magnificent one, is Pommern. She li es in the Baltic harbor of Marieham, excellently maintained in cons iderabl e m eas ur e thr o u gh the generosi ty of th e E rik so n S hippin g Co mpany which th e big, handso me, four-masted bark served for ma ny years . Does she serve th e essential needs of th e yo uth of th e Aland Isla nd s? Cap t. Kahre, one-time mate in one o f Er ik son's barks and a man of sc rupulou s ca re for the vesse l a nd th e museum of whi ch he is now director, a nd a man of grea t compassion and co ncern for the yo uth of those islands, has ass ured the author that Aland boys tod ay, rather than go to sea or lea rn a