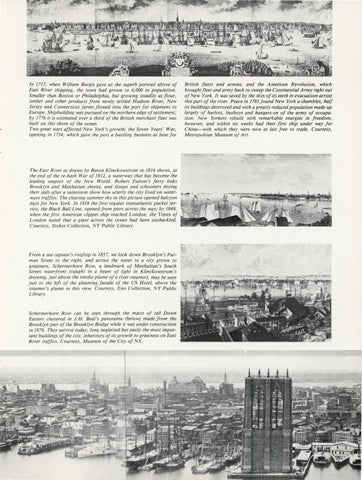 In I7I7, when William Burgis gave us the superb portrait above of East River shipping, the town had grown to 6,000 in population. Smaller than Boston or Philadelphia, but growing steadily as flour, timber and other products.from newly sel/led Hudson River, New Jersey and Connecticut farms flowed into the port for shipment to Europe. Shipbuilding was pursued on the northern edge of selllement; by 1776 it is estimated over a third of the British merchant fleet was built on this shore of the ocean. Two great wars affected New York's growth: the Seven Years ' War, opening in 1754, which gave the port a bustling business as base for

The East River as drawn by Baron Klinckowstrom in 1814 shows, at 1he end of 1he re-hash War of 1812, a waterway that has become the leading seaporl of the New World. Robert Fulton's ferry links Brookly n and Manhallan shores, and sloops and schooners drying lheir sails after a rainstorm show how ullerly the city lived on waterways traffics. The clearing summer sky in this piclure opened halcyon days for New York. In 1818 the first regular transatlantic packet service, the Black Ball Line, opened from piers across 1he way; by 1849, when the first American clipper ship reached London, the Times of London noted that a giant across the ocean had been unshackled. Courtesy, Stokes Collection, NY Public Library.

From a sea captain's rooftop in 1837, we look down Brooklyn's Furman Street to the right, and across the water to a city grown to f!,reatness. Schermerhorn Row, a landmark of Manhattan's South Street waterfront (caught in a beam of light in Klinckowstrom 's drawing, just above the smoke plume of a river steamer), may be seen just to the left of the gleaming facade of the US Hotel, above the s1eamer's plume in this view. Courtesy, Eno Collection, NY Public Library.

Schermerhorn Row can be seen through the masts of tall Down Easters clustered in J.H. Beal's panorama (below) made from the Brooklyn pier of !he Brooklyn Bridge while ii was under cons/ruction in 1876. They survive loday, long neglected bUI easily the mos/ important buildings of the city, inherilors of its growth to grea/ness on Eas/ River Ira/fies. Courtesy, Museum of the City of NY.

British /feels and armies, and !he American Revo/utfon, which brought flee/ and army back to sweep !he Conlinential Army right out of New York. It was saved by the skin of its teeth in evacuation across this part of the river. Peace in 1783 found New York a shambles, half its buildings destroyed and with a greatly reduced population made up largely of harlols, busboys and hangers-on of the army of occupation. New Yorkers rebuilt with remarkable energies in freedom, however, and within six weeks had their first ship under way for China-with which they were now at last free to trade. Courtesy, Metropolitan Museum of Art.