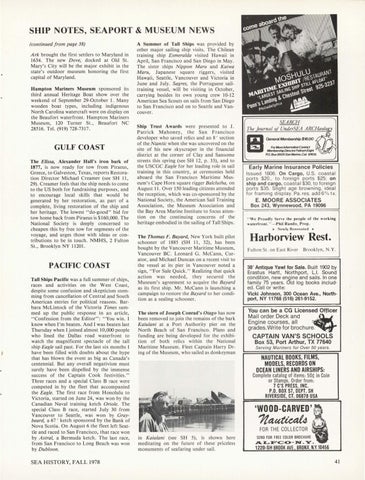 GULF COAST The Elissa, Alexander Hall&#39;s iron bark of 1877, is now ready for tow from Piraeus, Greece, to Galveston, Texas, reports Restoration Director Michael Creamer (see SH 11, 29). Creamer feels that the ship needs to come to the US both for fundraising purposes, and to encourage local skills that would be generated by her restoration, as part of a complete, living restoration of the ship and her heritage. The lowest &quot;do-good&quot; bid for tow home back from Piraeus is $160,000. The National Society is deeply concerned to cheapen this by free tow for segments of the voyage, and urges those with ideas or contributions to be in touch. NMHS, 2 Fulton St., Brooklyn NY 11201.

PACIFIC COAST Tall Ships Pacific was a full summer of ships, races and activities on the West Coast, despite some confusion and skepticism stemming from cancellation of Central .and South American entries for political reasons. Barbara McLintock of the Victoria Times summed up the public· response in an article, &quot;Confession from the Editor&quot;: &quot;You win. I know when I&#39;m beaten. And I was beaten last Thursday when I joined almost 10,000 people who lined the Dallas road waterfront to watch the magnificent spectacle of the tall ship Eagle sail past. For the last six months I have been filled with doubts about the hype that has blown the event as big as Canada&#39;s centennial. But any overall negativism must surely have been dispelled by the immense success of the Captain Cook festivities.&quot; Three races and a special Class B race were competed in by the fleet that accompanied the Eagle. The first race from Honolulu to Victoria, started on June 24, was won by the Canadian Naval training ketch Oriole. The special Class B race, started July 30 from Vancouver to Seattle, was won by Graybeard, a 67 &#39; ketch sponsored by the Bank of Nova Scotia. On August 6 the fleet left Seattle and raced to San Francisco, that race won by Astral, a Bermuda ketch. The last race, from San Francisco to Long Beach was won by Dubloon.

A Summer of Tall Ships was provided by other major sailing ship visits. Tlie Chilean training ship Esmeralda visited Hawaii in April, San Francisco and San Diego in May. The sister ships Nippon Maru and Kaiwa Maru, Japanese square riggers, visited Haw11ii, Seattle, Vancouver and Victoria in June and July. Sagres, the Portuguese sailtraining vessel, will be visiting in October, carrying besides its own young crew 10-12 American Sea Scouts on sails from San Diego to San Francisco and on to Seattle and Vancouver. Ship Trust Awards were presented to J. Patrick Mahoney , the San Francisco developer who saved relics and an 8&#39; section of the Niantic when she was uncovered on the site of his new skyscraper in the financial dist~ict at the corner of Clay and Sansome streets this spring (see SH 12; p. 33), and to the USCGC Eagle for her leading role in sail training in this country, at ceremonies held aboard the San Francisco Maritime Museum&#39;s Cape Horn square rigger Balclutha, on August 11. Over 150 leading citi zens attended the reception, which was co-sponsored by the National Society, the American Sail Training Association, the Museum Association and the Bay Area Marine Institute to focus attention on the continuing concerns of the heritage embodied in the sailing of Tall Ships.

* The Thomas F. Bayard, New York built pilot schooner of 1885 (SH 11, 32), has been bought by the Vancouver Maritime Museum, Vancouver BC. Leonard G. McCann, Curator, and Michael Duncan on a recent visit to the vessel at its pier in Vancouver noted a sign, &quot;For Sale Quick .&quot; Realizing that quick action was needed , they secured the Museum&#39;s agreement to acquire the Bayard as its first ship. Mr. McCann is launching a campaign to restore the Bayard to her condition as a sealing schooner. The stern of Joseph Conrad&#39;s Otago has now been removed to join the remains of the bark Kaiulani at a Port Authority pier on the North Beach of San Francisco. Plans and funding are being developed for the exhibition of both relics within the National Maritime Museum. Fleet Captain Ha rry Dring of the Museum, who sailed as donkeyman

1taeauat4 FOR THE COLLECTOR in Kaiulani (see SH 5), is shown here meditating on the future of these priceless monuments of seafaring under sail.