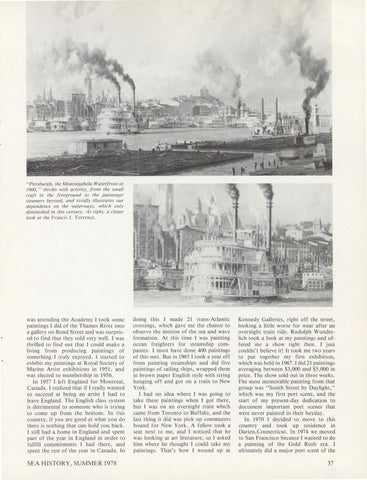 "Pillsburgh, the Monongahela Wa1e1front in 1900," throbs with activity, fro111 the small craft in the foreground to the passenger s1ea111ers beyond, and vividly illustrates our dependence on the waterways, which only diminish ed in this century. A I right, a closer look at the Francis J. Torrence.

was attending the Academy I took some paintings I did of the Thames River into a gallery on Bond Street and was surprised to find that they sold very well. I was thrilled to find out that I could make a living from producing paintings of something I truly enjoyed. I started to exhibit my paintings at Royal Society of Marine Artist exhibitions in 1951, and was elected to membership in 1956. In 1957 I left England for Montreal, Canada. I realized that if I really wanted to succeed al being an arti'st I had to leave England. The English class system is detrimental to someone who is trying to come up from the bottom. In this country, if you are good at what you do there is nothing that can hold you back . I still had a home in England and spent part of the year in England in order to fu lfill commitments I had there, and spent the rest of the year in Canada. In

doing this 1 made 21 trans-Atlantic crossings, which gave me the chance to observe the motion of the sea and wave formation. At this time I was painting ocean freighters for steamship companies. I must have done 400 paintings of this sort. But in 1965 I took a year off from painting steamships and did five paintings of sailing ships, wrapped them in brown paper English style with string hanging off and got on a train to New York. I had no idea where I was going to take these paintings when I got there, but I was on an overnight train which came from Toronto to Buffalo, and the last thing it did was pick up commuters bound for New York. A fellow took a seat next to me, and I noticed that he was looking at art literature, so I asked him where he thought I could take my paintings. That's how I wound up at

Kennedy Galleries, right off the street, looking a little worse for wear after an overnight train ride. Rudolph Wunderlich took a look at my paintings and offered me a show right then. I just couldn't believe it! It took me two years to put together my first exhibition, which was held in 1967. I did 21 paintings averaging between $3,000 and $5,000 in price. The show sold out in three weeks. The most memorable painting from that group was "South Street by Daylight," which was my first port scene, and the start of my present-day dedication to document important port scenes that were never painted in their heyday. In 1970 I decided to move to this country and took up residence in Darien,Connecticut. In 1974 we moved to San Francisco because I wanted to do a painting of the Gold Rush era. I ultimately did a major port scent of the