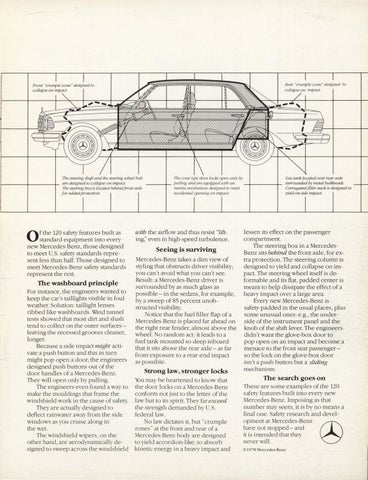 The steering shaft and the steenÂˇng wheel bub n1e cone type door locks open only by are designed to collapse on impact. -----+- pulling and are equipped with an ___._ _ ____._ The steering box is located behind fro nt axle inertia medJanism designed to resist for added protection. accidental opening on impact.

The washboard principle For instance, the engineers wanted to keep the car's taillights visible in foul weather. Solution: taillight lenses ribbed like washboards. Wind tunnel tests showed that most dirt and slush tend to collect on the outer surfaces leaving the recessed grooves cleaner, longer. Because a side impact might activate a push button and this in turn might pop open a door, the engineers designed push buttons out of the door handles of a Mercedes-Benz . They will open only by pulling. The engineers even found a way to make the mouldings that frame the windshield work in the cause of safety. They are actually designed to deflect rainwater away from the side windows as you cruise along in the wet. The windshield wipers , on the other hand , are aerodynamically designed to sweep across the windshield

with the airflow and thus resist "lifting;' even in high-speed turbulence.

Seeing is surviving Mercedes-Benz takes a dim view of styling that obstructs driver visibi lity; you can't avoid what you can't see . Result: a Mercedes-Benz driver is surrounded by as much glass as possible- in the sedans, for example, by a sweep of 85 percent unobstructed visibili ty. Notice that the fuel filler flap of a Mercedes-Benz is placed far ahead on the right rear fender, almost above the wheel. o random act: it leads to a fuel tank mounted so deep inboard that it sits above the rear axle - as far from exposure to a rear-end impact as possible.

Strong law, stronger locks You may be heartened to know that the door locks on a Mercedes-Benz conform not just to the letter of the law but to its spirit. They far exceed the strength demanded by .S. federal law. No law dictates it, but "crumple zones" at the front and rear of a Mercedes-Benz body are designed to yield accordion-like, to absorb kinetic energy in a heavy impact and

Gas tank located over rear axle surrounded by metal bulkheads. Corrugated filler-neck is designed to yield on side impact.

lessen its effect on the passenger compartment. The steering box in a MercedesBenz sits behind the front axle, for extra protection. The steering column is designed to yield and collapse on impact. The steering wheel itself is deformable and its flat, padded center is meant to help dissipate the effect of a heavy impact over a large area. Every new Mercedes-Benz is safety-padded in the usual places, plus some unusual ones: e.g., the underside of the instrument panel and the knob of the shift lever. The engineers didn't want the glove-box door to pop open on an impact and become a menace to the front seat passenger so the lock on the glove-box door isn't a push button but a sliding mechanism.

The search goes on These are some examples of the 120 safety features built into every new Mercedes-Benz. Imposing as that number may seem, it is by no means a final one. Safety research and development at Mercedes-Benz have not stopped- and it is intended that they never will. ÂŠ 1978 M ercedes -Benz